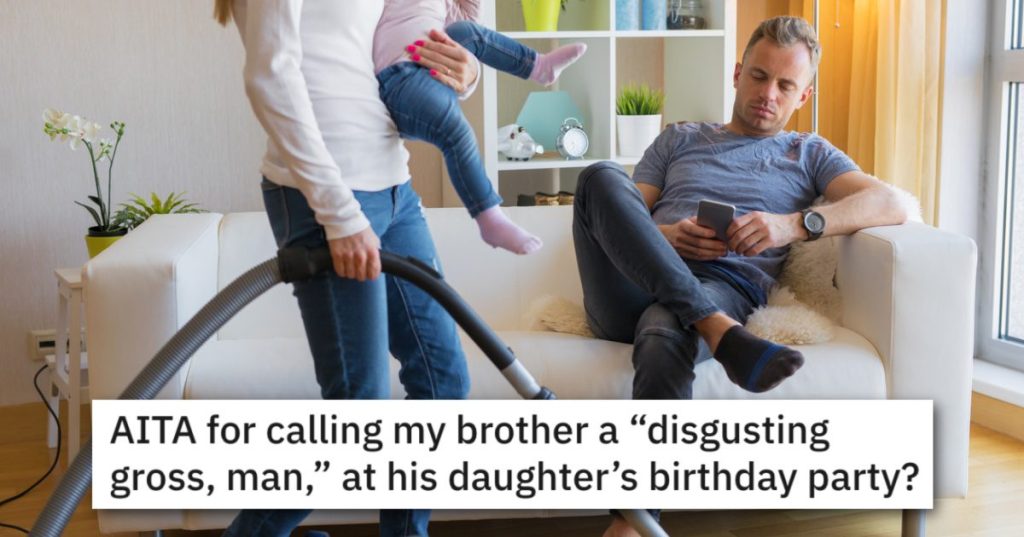 Is There Ever A Good Time To Call Your Brother Out For Being Awful?

I would love to report that everyone in the world has an amazing family who deserves nothing but the highest praise, but as most of us sadly realize, that’s just not reality.

Sometimes people are awful, even if they’re family, and when they cross a line we need to call them out – but are there times and places that are off limits?

That’s what this guy is wondering after losing his cool with his brother at his niece’s birthday party.

He prefaces the entire account with the fact that he doesn’t get along with his brother and doesn’t see his family all that often, but that he loves his niece and was excited to celebrate her first birthday.

My brother, “Paul,” and I are not close at all. We have very different worldviews and have incompatible personalities. I can tolerate him, but I would never consider him a friend. He’s been married to “Lisa,” for one or two years now and they have a beautiful daughter together.

My girlfriend, “Amy,” and I were invited to celebrate my niece’s first birthday. Most of the family was invited, and it would be the first time I would have seen them all together (I only see my family once or twice a year, with a few exceptions.)

When he and his girlfriend arrived they found his brother’s wife harried and trying to get everything ready while he did essentially nothing, even handing over the baby to have a seat once they were there.

Amy and I arrived a little earlier than we were supposed to and instead of waiting in the car, we decided to go in. The first thing I noticed is how calm my brother seemed to be in contrast to Lisa, who was frantically running up and down. When he saw Amy, he immediately handed the baby over to her and got a beer to sit down and watch TV. Lisa was clearly struggling, and he was content with a beer and Netflix.

I don’t want to be rude and maybe this was a one-time thing but it bothered me how uninvolved he was. He handed Amy a baby with a full diaper with vomit on its clothes.

They got the house party ready and were enjoying the day when his brother approached to thank him for helping out beforehand…but things took a nosedive from there.

Eventually Amy, Lisa and I finished everything. The house was clean, the food was ready, and Lisa looked ready to host a big gathering. We all paid zero attention to Paul.

When my family arrived, I thought everything was going well. I avoided Paul and enjoyed speaking to my family. After we had sat down to eat, Paul approached me, drunk, thanking me for helping Lisa. I did not want to be around him for long and moved out of his way.

He was very persistent.

He wouldn’t stop until his comments became so inappropriate that OP’s girlfriend bugged out and OP felt obliged to tell his brother where to shove it.

I was ignoring him but he started talking about Amy. “Protect Amy like a “real” man.” or “You’ve got a great woman by your side.” You know what, whatever. It was slightly odd and mildly uncomfortable, but I was able to brush it away. Amy was trying to sober him up a little bit before the cake-cutting so she was “selectively hearing.”

We tried to get him to stop talking and drink water. However, he had a lot to say about Lisa. He was complaining about how pregnancy “ruined” Lisa’s body and how a baby ruined his life. Amy and I kept looking at each other awkwardly and we were soon going to leave him be.

He was complaining to be about his sex life, or lack thereof, and commenting on how desperately he wanted to have sex with someone “fit like Amy.”

This made the both of us extremely uncomfortable. Amy left, quickly apologising to Lisa. I told him that he was a “disgusting, gross man who needs some fucking help,” before I left.

He’s wondering if maybe he should have let his brother enjoy the day, given that his “feedback” apparently ruined the party, and I just bet Reddit is going to be on his side.

Apparently, this made him super upset and he started wailing at the party. Paul told everyone that the reason he was crying was because of my words to him. He got over it quickly, but a few people told me I was wrong to shame a father on his child’s birthday.

I could have probably left without making a statement. AITA?

The top comment says that not only is OP not in the wrong, they hope the wife figures out what a jerk she married and leaves him, too. 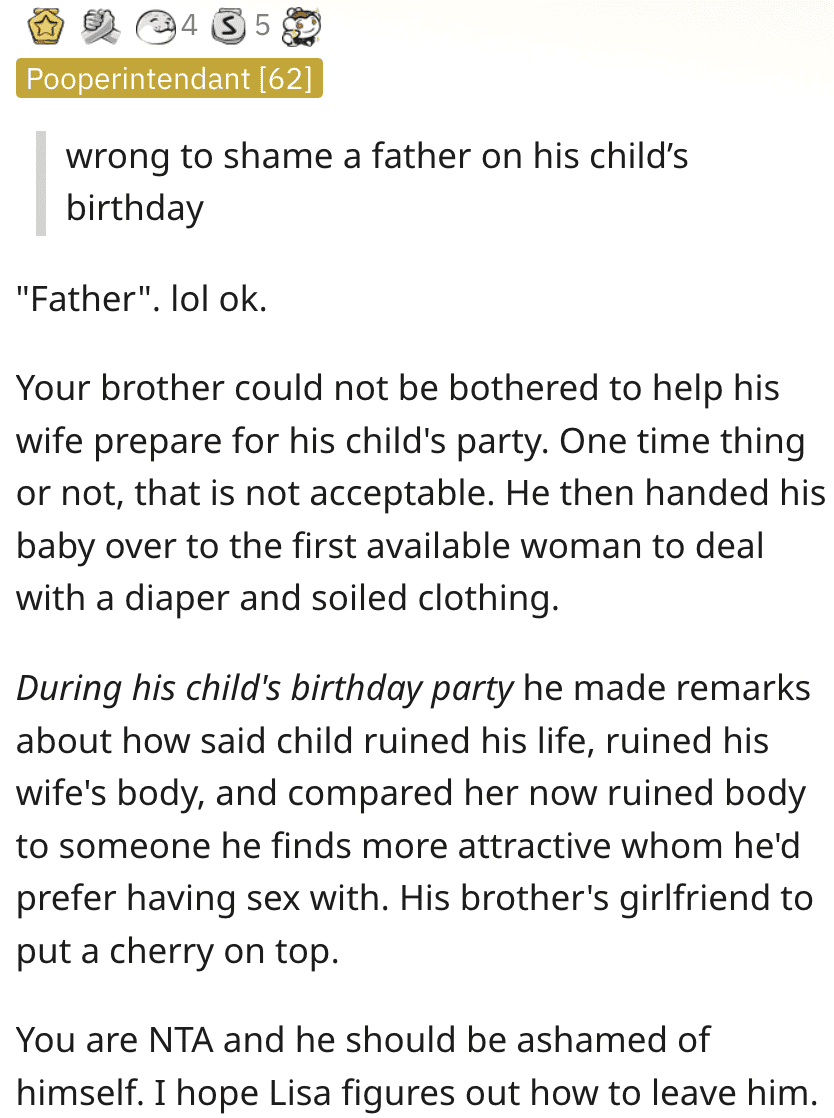 I mean this guy is a real peach, right? 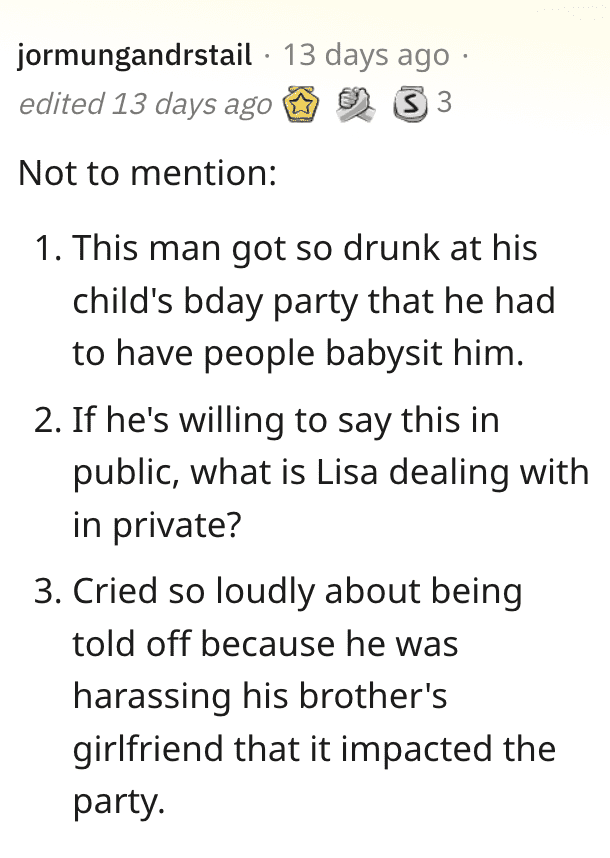 We’ve all had it up to here with dudes like these, to be honest. 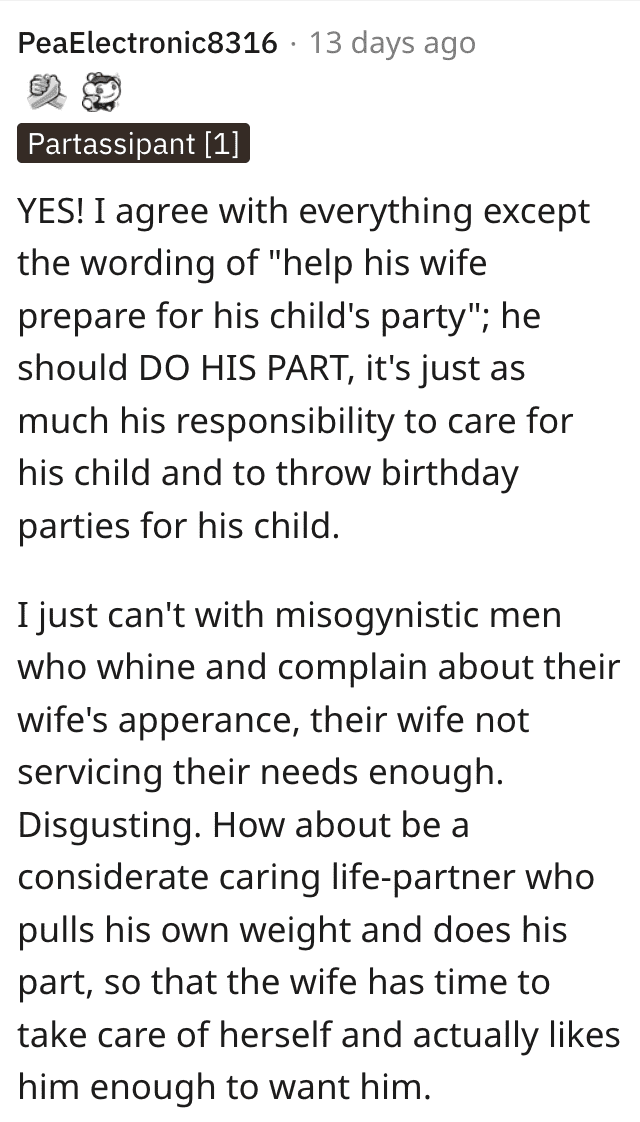 More than one person suggested OP reach out and see if Lisa needs more help…packing her things. 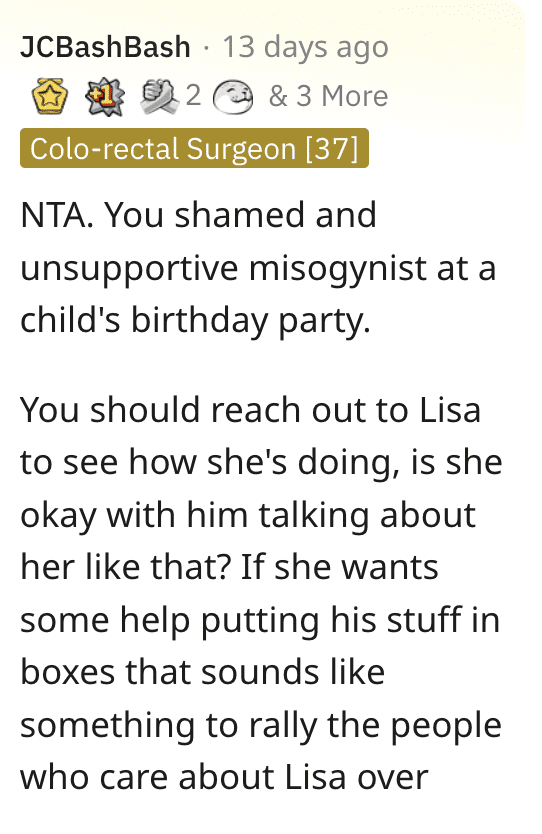 Regardless of timing, OP’s comments may not have been harsh enough. 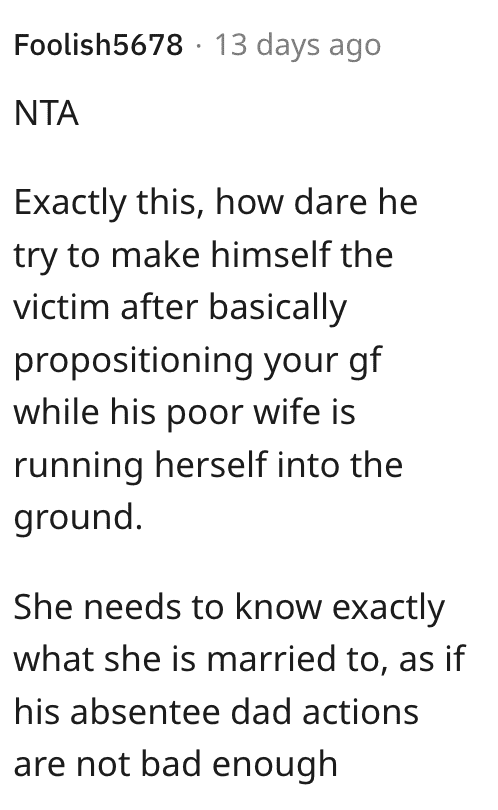 I know that leaving the father of your kid is easier said than done, but I don’t know how I would get over this if I was his wife.

How would you handle it? A conversation? A swift kick to the crotch? Silence? Let us know in the comments!