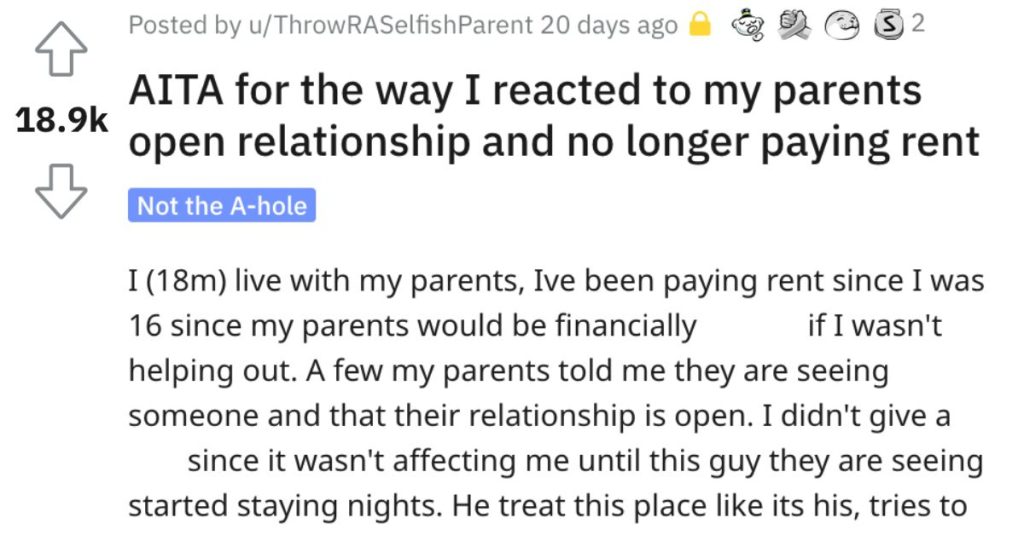 Is This Teenager Wrong for the Way He Reacted to His Parents’ Open Relationship? People Responded.

Can you blame a kid for getting upset and acting out if his parents tell him they’re in an open relationship?

I sure don’t think so, but that’s just my opinion…

Take a look at this story and see if you think this teenage kid was out of line for the way he acted.

AITA for the way I reacted to my parents’ open relationship and no longer paying rent?

“I (18m) live with my parents, I’ve been paying rent since I was 16 since my parents would be financially f**ked if I wasn’t helping out.

A few my parents told me they are seeing someone and that their relationship is open. I didn’t give a s**t since it wasn’t affecting me until this guy they are seeing started staying nights. He treat this place like its his, tries to tell me what to do and eats all our (MY) food. I tried talking to my parents about it but they just said its their house so they can have who they want here.

I really tried to put up with it until this guy tried to discipline my dog. I flipped my s**t, it was most certainly not the way you discipline a dog and Im already sick of his s**t. I yelled the house down, calling him all sorts, like “dumb c*nt” “piece of s**t free loader” and some more vile s**t thats probably way too f**ked up to say here.

My parents rushed to see what’s going on and tell me off but instead I told them off calling them terrible parents, that they can shove their house up their a** and that I’m not going to pay rent to live in a house i have no say in. That “dumb c**t” can cover my rent.

I’ve since been staying with my boyfriend. My parents recently texted me asking for my rent. I told them to f**k off and reminded them of what I said. I feel like I’m not wrong to not pay rent anymore but I went so overboard with my words.

This reader said this kid is NTA and that they’re glad he left. 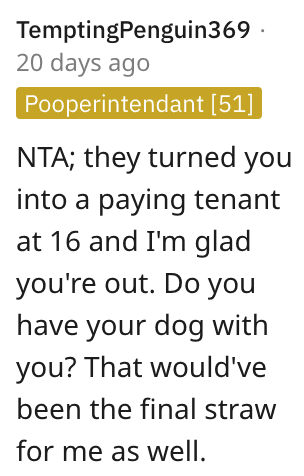 Another reader said he’s NTA and they offered up some tips he might want think about. 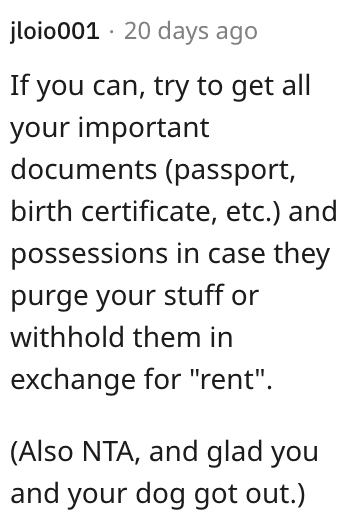 And this Reddit user also said he’s NTA and that his parents sound pretty messed up. 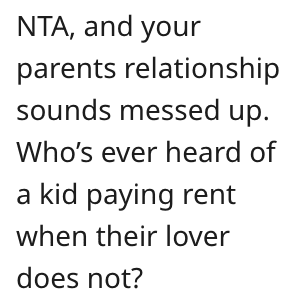