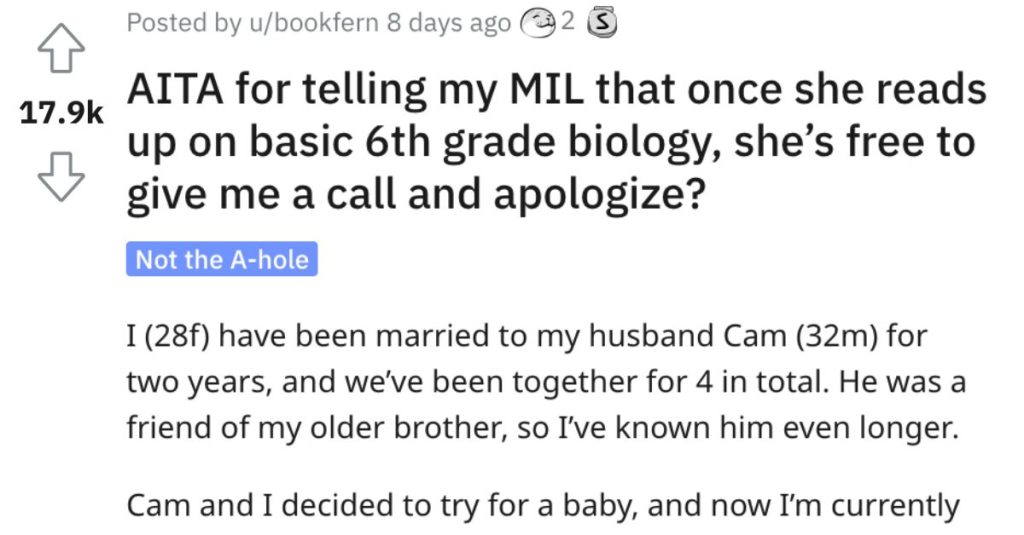 She Told Her Mother-In-Law to Read Up on Basic Biology. Did She Go Too Far?

This sounds like a sick burn, don’t you think?

But did it make this woman sound like an a**hole?

Read the story she shared on Reddit and let us know what you think in the comments.

AITA for telling my MIL that once she reads up on basic 6th grade biology, she’s free to give me a call and apologize?

“I (28f) have been married to my husband Cam (32m) for two years, and we’ve been together for 4 in total. He was a friend of my older brother, so I’ve known him even longer.

Cam and I decided to try for a baby, and now I’m currently 20 weeks with our first. When we told my MIL the news, the first thing she mentioned was that every woman in the family had a son before they had a daughter, so she thought the baby would be a boy. Cam and I told her we didn’t care what we were having, we just wanted a happy and healthy child.

Well I’m having a girl, and we informed my MIL of this earlier in the evening. Cam and I weren’t onboard with the idea of a huge dramatic gender reveal so we just decided to go with casual announcements. MIL immediately seemed upset at this and she told me that next time I need to try harder to give my husband a son. I laughed and said I didn’t really have much of a choice in the matter, so if and when we have another child, there’s nothing I could do to make sure we had a boy then either.

She said that it was a fault on my end, because she had a boy first (she had all boys), all of her other sons wives had boys first, so that meant I was the odd one out.

Cam told his mom that he didn’t care about having a son or not, and that she needed to stop blaming me for something that couldn’t possibly be my fault but then she started getting onto him about how he should want a child that can carry on the family name instead of a daughter that will just be given away.

My husband and I left after that, and in the car he said that while he understood my frustration, he didn’t appreciate me speaking to his mother like that because I basically implied that she was an idiot. I told him that I didn’t appreciate the way she was speaking to me and that he should be upset on behalf of our daughter since his mom clearly seems to think less of our child before she’s even been born.

The rest of the car ride was silent, and honestly we haven’t talked since getting back home either. He did defend me to her, so I know he’s on my side, but I know he wouldn’t have brought up the way I spoke to her unless he really thought it was out of line.

I feel like a bit of an AH now, and I’m not sure if I should apologize to her or not.”

One reader said she’s NTA and made a good point. 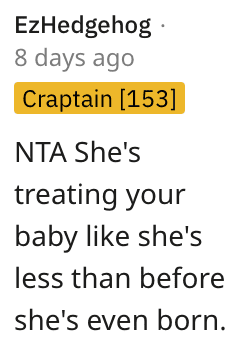 And this individual said that she should go no contact with her MIL. 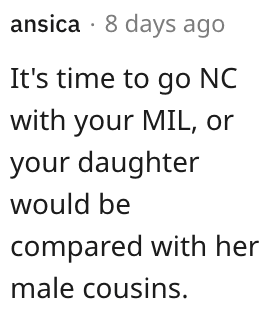 And another Reddit user made it clear what they think: f**k the MIL’s mindset about this. 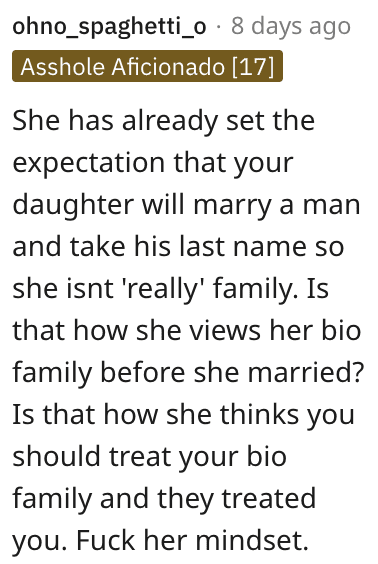