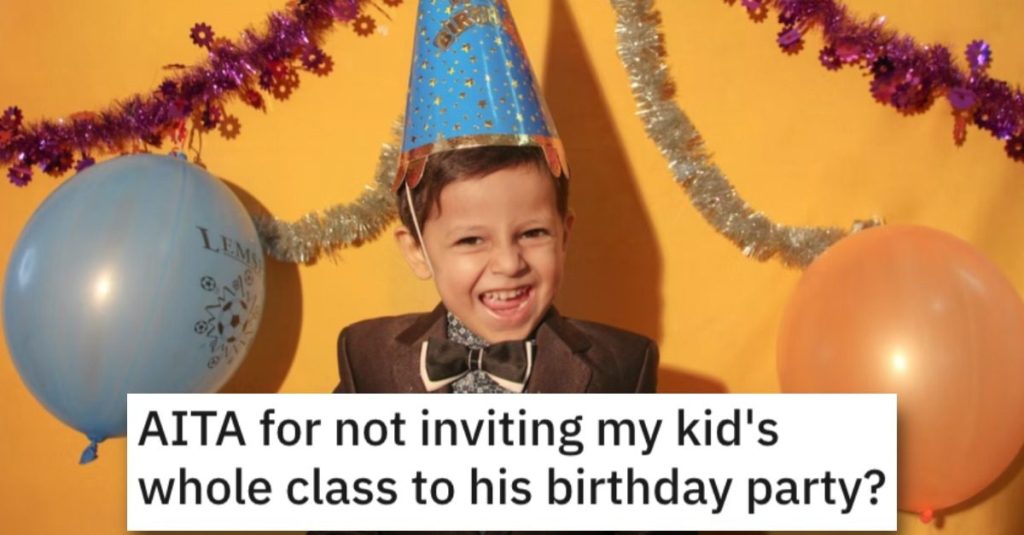 Is This Woman Wrong for Not Wanting to Invite Her Kid’s Whole Class to His Birthday Party? People Responded.

Things sure can get testy when it comes to what kids are (and are not) invited to birthday parties.

But today we’re talking about a mom who wants to know if she’s a jerk for only inviting some of her kid’s classmates to his party.

AITA for not inviting my kid’s whole class to his birthday party?

“I (28F) am a mother of a wonderful 8 years old son. This whole thing happened last April, but I am still getting complaints. So here I am asking strangers for a judgement on the internet.

So last year was my kid’s first year in “big kids’ school” like he calls it, since his first grade coincided with the pandemic. We are not in the best place financially; like most families, our consumer debt piled on and we are throwing every spare cent at it.

So when it was time to throw him a party, I only invited 5 of his classmates, the ones he considered his friends. For the others I sent 2 dozen cupcakes and juice boxes to class.

The invites were delivered to their houses and not in front of the other kids.

Like I said, money was tight so I got creative. I made 9 small cakes (box cakes, vanilla, chocolate and funfetti), buttercream in different colours. Also made big sugar cookies and different coloured frosting and sprinkles. And finally bought tortillas, made pizza sauce and had a variety of toppings. I asked that the kids bring swimsuits and water guns.

We had a make your own pizza station for lunch, then they played with their water guns. Then they decorated their cakes and finally their cookies to take home with them. That was a Saturday.

Well the next Monday, the kids would not stop raving about how fun the party was, how it was the best birthday party ever. The other kids were not happy to not be invited.

At pick up Tuesday, a couple moms confronted me about not inviting their kids. I said that I am sorry, but it was a small party for his close friends only. They kept complaining about me excluding their kids.

I didn’t take it seriously then, but now it is a new school year, almost 6 month later, and I am still getting the occasional comment thrown at me.

This person said this mom is NTA and that the way other parents acted is absurd. 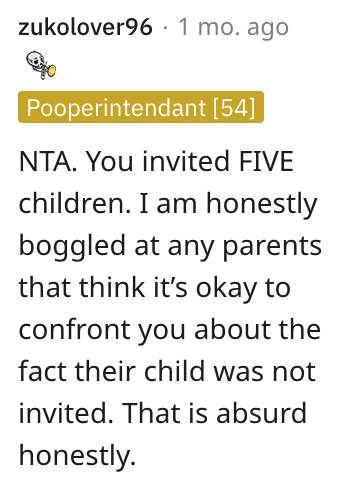 And this individual also said she’s NTA…and they blame educators and reality TV. 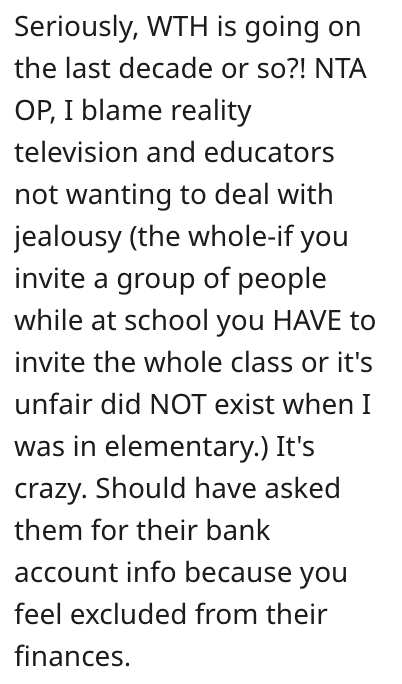 And this Reddit user said she’s NTA based on the rule of the thumb they believe in. 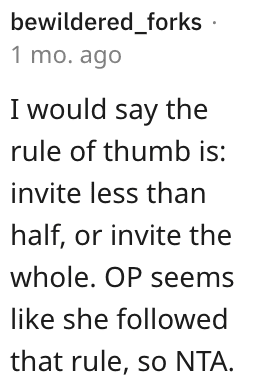