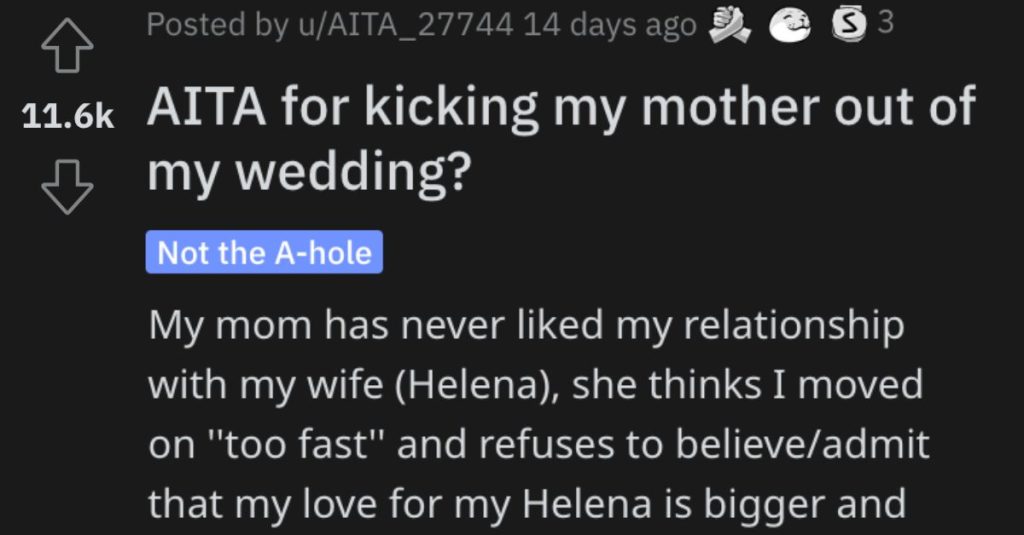 You know that things gotta be pretty ugly for a person to kick their own mother out of their wedding.

But that’s what we’re dealing with here, people!

Check out this story from Reddit’s “Am I the A**hole?” page and let us know if you think this guy was out of line for giving his mom the boot.

AITA for kicking my mother out of my wedding?

“My late wife passed away 6 years ago, we dated for 4 years and were married for one before her passing.

My mom loved her as a daughter since I’m her only child and I guess she never truly recovered, I loved my late wife too, but after meeting and spending time with my current wife, I’m sure she was not the love of my life.

My mom has never liked my relationship with my wife (Helena), she thinks I moved on ”too fast” and refuses to believe/admit that my love for my Helena is bigger and truer that the one I had for my late wife.

There’s a few instances before the actual wedding when I thought my mom crossed the invisible line, but my wife, wanting to be accepted, let it pass and asked me to no do anything. My mom was constantly talking and comparing the wedding with my first one (We married young and I couldn’t afford lots or big things, with Helena, I’m financially stable and I was capable of having a big, beautiful wedding).

She asked, several times, if I could invite my late wife’s parents to my wedding as an act of love and to tell them I was still there for them, but I refused. I haven’t talk to them in years and I have no reason for keeping them in my life.

She was very adamant and even Helena said that if I wanted to have them there, then it was okay, but I didn’t want to. I felt like my mom had hold onto my previous marriage too hard, refusing to let go and inviting me to do the same. As bad as it sounds, I was done, I want to be with Helena without the burden of always having my ex-in laws there, watching the life her daughter and I did not have.

During the wedding day, my mom actually showed up with them, I asked what they’re doing there and they, very ashamed, said that my mother had invited them and they thought it was okay. My mom said they’re ”my family” and I had a duty toward them, I said they could stay for the reception to avoid comments, but that I hadn’t invited them and that I was sorry.

I looked to my mom and said ”You’re not allowed to stay to anything. Leave, we will talk later”. She cried and begged, but I asked her again to leave, in the end, the three of them left together and my dad (who has been divorced of her for almost 15 years) called me an AH.”

One reader said he’s NTA, but… 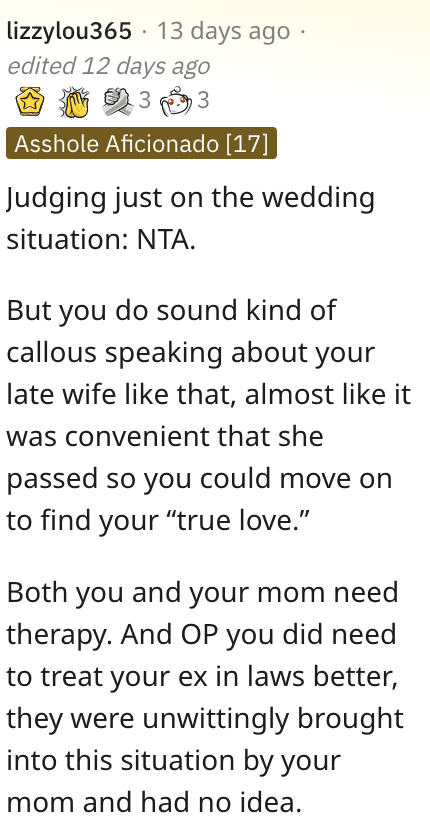 And this individual disagreed and said that he sounds just fine.

Another Reddit user said that everyone sucks here except for his new wife, Helena. 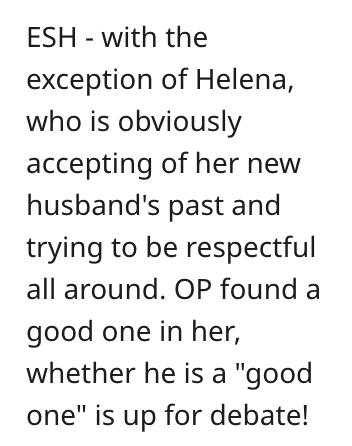