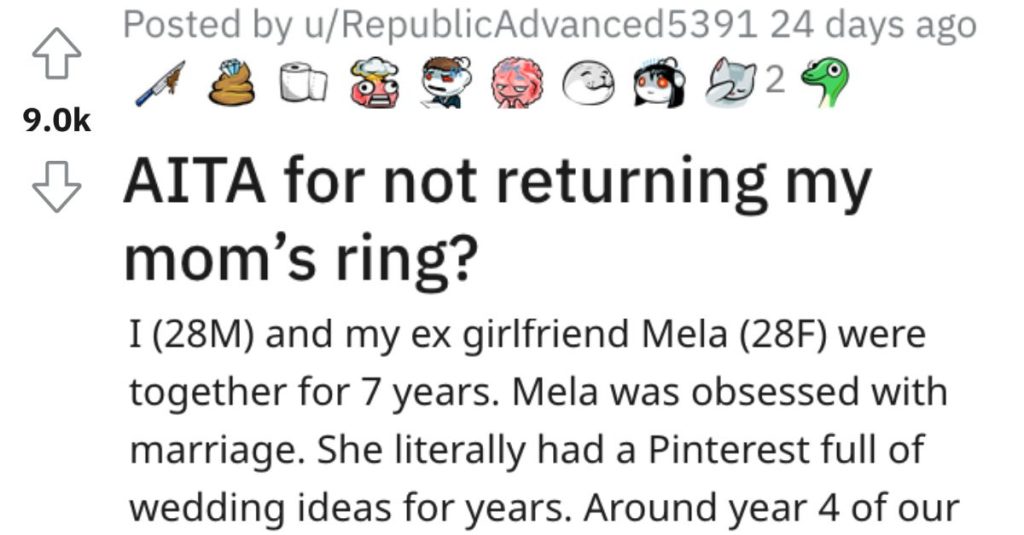 People get really fired up about their family heirlooms, don’t they?

Because I think I probably would, too.

But is this guy acting like an a**hole when it comes to his mother’s ring?

Check out his story and let us know what you think in the comments.

AITA for not returning my mom’s ring?

“I (28M) and my ex girlfriend Mela (28F) were together for 7 years. Mela was obsessed with marriage.

She literally had a Pinterest full of wedding ideas for years. Around year 4 of our relationship she started outright saying that she wanted to be married and wanted to be proposed in this way or that way and basically making plans. I told her that I would think about it.

While I loved her, I wasn’t sure if marriage was for me. We had an argument and she made an ultimatum. Either I propose or we break up. I didn’t make a decision and she broke up with me. I realized I wanted her in my life and I proposed.

My mom gave me her engagement ring which wasn’t Mela’s style or size but she seemed happy. I started getting second thoughts and we got into a fight. Mela took off the ring and gave it back to me. We broke up and we went our separate ways.

I took that as she was giving me the ring. Mela and my mom were close and she was invited to the wedding. Mela is getting married to Devin (25M) who’s apparently head over heels for her and bought her a $15k engagement ring.

My mom wanted to wear her best jewelry for the wedding as it was a lavish event and asked for her ring back. I told her I wouldn’t give her the engagement ring back as it was mine and I didn’t want Mela to see the engagement ring that she was supposed to have since it would probably make her feel bad since she married the first guy who was there.

My mom is upset. My family is calling me an a**hole. My dad (who made the ring) said I was a selfish brat. I keep getting nasty emails from relatives about the situation.

This reader said he’s the a**hole in this story and that he needs to give the ring back. 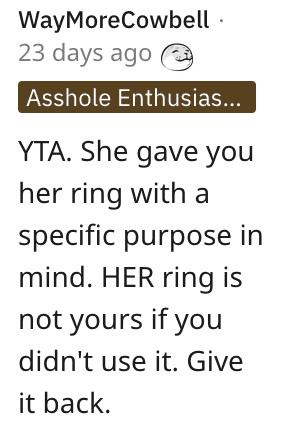 And this Reddit user agreed and said he’s being tacky and rude.

Another individual said they have a major problem with something specific that this guy said.