Scientists have been getting spiders high for decades. This practice is clearly only for scientific reasons. It is not at all amusing. It’s strictly science.

When scientists give drugs to a spider, two things will inevitably happen:

Continue reading to find out what a spider’s web looks like when it’s as high as Charlie Sheen on a Sunday (or Monday. Or any day).

In 1948, zoologist H. M. Peters was apparently pretty annoyed by the fact that garden spiders build their webs from 2am-5am, and he asked pharmacologist Peter N. Witt to drug them and see if he could get them to start building their webs earlier. So, Witt began researching the effect psychoactive drugs had on spiders and made a very interesting discovery. None of the tested drugs changed the time of day that spiders built their webs, but they did greatly affect the size and shape of them.

Amphetamine, mescaline, strychnine, LSD, and caffeine were used in the tests, and all of them had a negative effect on the regularity of the web circles- except one: LSD.  In small doses, LSD actually made the circles around the web more regular. Amphetamine only caused slight irregularities, but caffeine is a different story. Larger doses of caffeine caused severe alterations to the web structure, as seen in the picture below. It turns out caffeine is toxic to a lot of insects. In 1984 J. A. Nathanson found that methylxanthines (caffeine) in high doses killed many worms, caterpillars, slugs, and snails.

But in low doses it prevented them from eating the affected plants.

Result: caffeine could in fact be a natural pesticide!

In 1995, NASA scientists repeated Witt’s experiment to see if spiders could be used to test the toxicity of certain drugs. They figured they could use their research of the geometry of crystals to help them create computer programs capable of objectively analyzing web-building, so the results would reveal each drug’s true level of toxicity without bias.

This time they used caffeine, benzedrine (speed), marijuana, mescaline (peyote), and chloral hydrate (sleeping pills). The results were pretty much the same as Witt’s 1940s trials – the more toxic the drug, the more sides of the web a spider failed to complete.

This is how it looked: 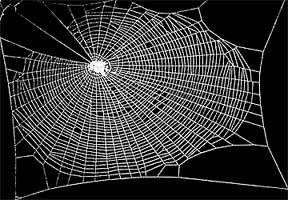 LSD, as indicated before, maintained regularity.

As you can see, the spider that took marijuana started a web and then flat-out gave up.  No report on whether he ate extra flies…

Mescaline, also a hallucinogenic, produced another somewhat regular web, like LSD did.

Caffeine, one of the drugs most commonly consumed by humans, made spiders practically incapable of doing a damn thing.

Maybe this means we all need more sleep?