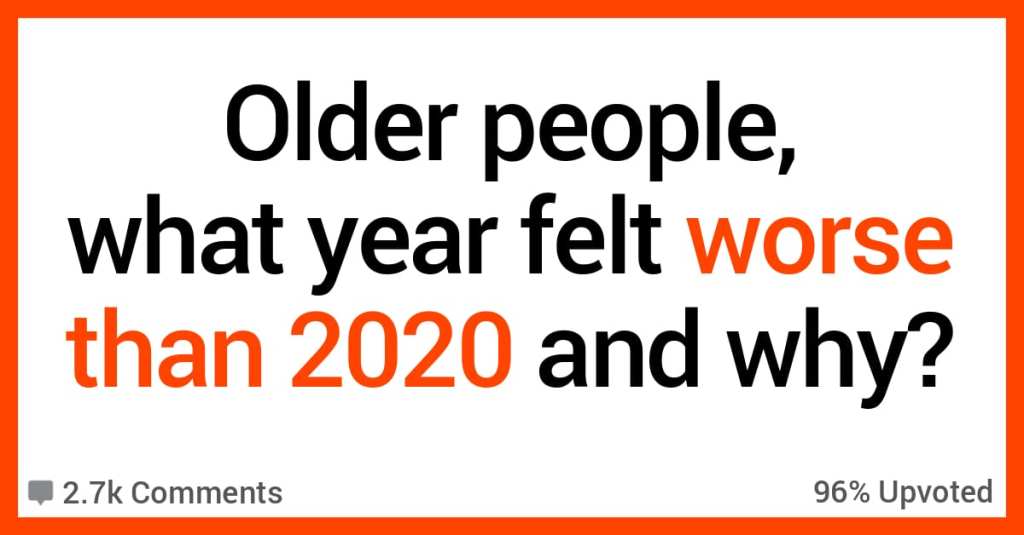 I’ve read a lot about the year 1968 and I’ve always said to myself, “wow, that must have been so exciting and interesting to live through such a tumultuous year.”

What are some other years that felt worse than 2020?

Let’s get some history lessons from folks on AskReddit.

“My parents still think the economic crash of the 1990s that happened in Finland was worse, and in Finland it killed more people in the form of suicides than Corona has thus far.

I was just born around that time. And lots of people just lost everything. Companies folded left and right. Loan intrests were crushing people.

Then right after that we got dot com bubble.”

2019 was awful. I found out my recently deceased father had an entire other family. I guess technically, we were his other family.

Met the ones he abandoned (my new older half siblings) last summer and it was incredibly awkward and for some reason left me hollow and extremely full of guilt.”

“I’m 42. I’ve had years that were personally pretty bad, but this is super weird times.

Like, late 1997, the day before my 20th birthday, my mom was diagnosed with cancer and the first 6 months of 1998 were especially very, very stressful and scary, but at least I could go out with friends, I threw myself in to school, I worked, I tried to be useful or out of the way at home. I didn’t have to think about it 24/7.

I deactivated my FB, Insta, and Twitter October 1 and I’m planning to keep them like that at least through the election, maybe longer. Can’t change what’s going on, but I can’t have all of this crap living rent-free in my head all the time.”

“1963 because President Kennedy was shot.

My teacher cried and my father left home.”

“The last quarter of 2001 was more intensely miserable.

2020 misery is more spread out and not quite as terrifying.”

NATO was only supposed to bomb military objects, but they bombed hospitals, markets, random populated areas. I was in the hospital with my dad when the sirens came on the whole hospital went to the basement, lucky the hospital wasn’t hit, after the danger my dad drove us back he told me not to look out the window, being a kid I did look only to see innocent people dead along the whole street as the flea market was hit on a weekend…

I am 25 y/o now I still have nightmares about it occasionally. Also NATO used prohibited weapons with uranium which also caused a lot of people to get cancer from the radiation years after…”

7. History in the making.

People dying or being maimed for life (both mentally and physically) in a stupid, nonsensical war. Richard Nixon was President. The government refusing to listen to hundreds of thousands of people protesting the war, and people of all sorts not just college kids and hippies.

I participated in a HUGE protest in DC and walked down Pennsylvania Avenue with a lot of other people, holding the hands of my two kids. “We are speaking to our government. Never forget.””

Big financial crash, lots of people lost a lot of money, especially from their savings and retirements. Lots of layoffs, including me, and really high unemployment and few jobs to move to.”

“1983 was probably the year we came closest to global nuclear war. Even worse than the Cuban Missile Crisis.

There was a large confluence of circumstances and events (some related, some not) that could have spelled doom.”

I spent a good bit of time homeless or living in a tent. I was in the US illegally and couldn’t get any form of assistance without being deported, and I was too small for most places to even consider employing me under the table.

Also, honorable mentions to 2016-17 for my divorce year and pretty much the entire period of 1992-1997 for me. 2020 doesn’t crack my top ten worst years, aside from the collapse of western civilization it really hasn’t been too bad on me.”

“It’s has to be 1947 when India got independence from britishers and then divided into Pakistan(Islamic country), India (republic nation).

People were forced to leave according to their religion. They were burnt alive and r*ped. Around 2 million people died, 14 million misplaced.

And my father told me that my grandfather who used to work as a ticket checker in railway had seen trains full of dead bodies.”

“Late 1960s and early 70s, we had the Vietnam war body count nightly on the news, for years. Everyone was worried about being drafted. I was too young.

There was plenty of angst to go around then. But I feel this year has probably been as bad or worse.”

Started with the Tet Offensive in Vietnam. It was a military disaster for the North Vietnamese, but a big surprise to the American public – they had been told the war was effectively won. And from there it just got worse.

Student riots. City riots. MLK was assassinated in early April and the ghettos exploded. Then in early June, I was on a South Vietnamese hilltop firebase. One of our less English-proficient officers came up to the American advisers in the afternoon. “You know Kennedy, ya? They shoot him!” The three of us looked at him. I said, “Yeah Đại Úy (Captain), back in 1963. So?”

“NO!” he said, “They shoot him now!” Then he got frustrated with us and stomped off. Weird. What’s up with the Đại Úy? We couldn’t get American radio (AFVN) in the daytime, but later that night we found out what he was talking about. Another Kennedy? WTF is going on back home?

I got back on leave in December. America was nuts. I couldn’t walk through the airport without starting a fight. I wasn’t fighting. Someone would want to yell at me, and someone else would start yelling at him, and eventually they’d forget I was there – because I wasn’t. My instructions were to keep walking. The war had come home. Racial justice had graduated to racial war.

It was almost a relief to get back to Vietnam. Seemed saner.

Bad year for the USA. 1969 was only better because some of the things people were expecting to happen, didn’t. But it wasn’t much better.”

Now we want to hear from even more older folks.

In the comments, please tell us what years you think were worse than 2020.