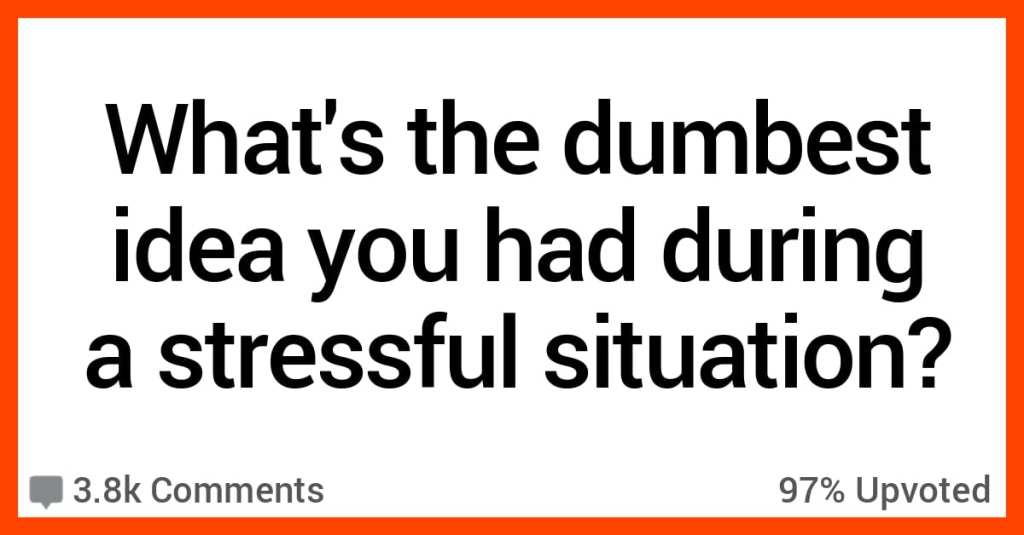 We’re not always at our best during stressful times, are we?

What’s the dumbest idea you ever had in the middle of a stressful situation?

“I was fixing my guitar amp.

I grabbed a can of lubricant instead of air spray and sprayed it all over the amp circuit. In a fit of genius I took the amp board in to the tub to wash it all off before it damaged anything.

I don’t have that amp anymore.”

I was fiddling with the cigarette lighter-the one you push into the console that heated up. I pulled it out and was about to touch it when she firmly told me to put it back and not touch it again.

We were on our way back from the grocery store and had to get gas. She pulls over, tells me to wait in the car whilst she gets gas. My nine year old self decides to “outsmart her.”

I took one of the plastic bags from the store and wrapped it around my finger…and decided if I had that in place, it technically wasn’t me touching it. It was the plastic.

It played out as you’d expect. I ended up melting a plastic bag onto my finger and the situation involved me screaming my head off.”

“The first day that I started roofing the machine that kept the tar hot caught on fire. I grabbed on water hose and began to spray.

That was my last day roofing.”

“Toilet at school blocked up. I know school toilets are an absolute mess, but hear me out.

I knew I couldn’t leave the toilet in that state because I’m not the type of person to just leave problems for the next person in line. Also I couldn’t just leave it there either, in case someone was waiting to use the toilet and they were smart enough to put the pieces of the puzzle together.

Anyway, I got a bit stressed out, so I decided to check underneath the cubicle next to me to see if anyone was in there. From what I could see, no one was there, but I wasn’t 100% sure. And luckily the toilet seat was up, once I looked over the edge. Very risky, but luckily no one was there.

My plan was to move the blockage from one toilet to the other. Yes, this was a f*cking awful idea. You’re probably wondering how I fished the blockage out, well lets just say old pencil cases are good for this.

Anyway I picked up the blockage and dumped it in the toilet next to me. In other words I successfully unblocked a school toilet in the dumbest way possible. For the rest of the day, I was disgusted but at the same time I knew deep down that I went where no one else would ever dare to go.

This is also the story of why I refuse to use public toilets.”

“I had a full on panic attack.

Thought it would be smart to lock myself in the half bathroom. I ended up on the toilet for three hours until my wife came home from work. Still in full blown manic mode.

She tried to unlock the door, the handle came apart, I’m losing it and I can’t get off the toilet to help bc my legs are asleep from sitting on it for the last three hours.

We look back and look at our security footage and it looks like Keystone Cops watching her trying to help me and we both get a good chuckle from it now.”

“I was driving through town and saw my boyfriend walking up the road holding hands with a woman.

I stopped the car and gave chase.

I forgot I was wearing a chicken suit – complete with feet and beak.”

“I was alone in the woods, miles from civilization, suffering from exhaustion and hypothermia.

I started to eat handfuls of snow because I thought maybe it had calories that would energize me/warm me up.

Hypothermia does weird things to your mind.”

“One time I jumped over a balcony to one story below to escape a conversation.

I blamed it alcohol afterward as an excuse because it was an alcohol party, even though I didn’t drink.

It hurt like hell, but I didn’t even break a bone, so I guess I got off easy.”

“Pregnant wife started an argument before we both drove to work. Got pretty heated, she got p*ssed and drove off first. So I thought.

So when I drove backwards she was still there, sitting in her car…and I backed right into her. Put a dent into her car. But instead of looking after my wife and if she was well instead checked the car for damages and decided to call insurance, while she was still sitting in the drivers seat.

Pretty d*mn stupid of me, and when iIm thinking back, I don’t have the slightest idea what was going on in my mind in that situation. Not proud of it at all.”

“I was being followed by some random creep who no matter where I turned kept following me after I got off school. So you wanna know what my brain told me to do?

I started doing the JoJo torture dance and played the music to the mass. I can’t make this sh*t up.

My reasoning was, if I’m going to die to some random creep, I’m gonna die doing something I love.”

“I locked myself out of my car for the second time, except this time around I’d left the engine running with my house keys and phone inside while I sat in the driveway.

With nowhere to go and no one to call for help I made the stupid decision to just put a brick through my drivers side window.

If I’d actually taken the time to think it through I could have hit one of the small quarter windows at the back and opened the car via the back door but no that would have been sensible.”

“One evening me and my buddy were sitting on a bridge, smoking a bowl. A police cruiser rolled up and shined its light at us.

It was Cali and we both had med cards so we wouldn’t be in trouble for possession but this could have been a public intoxication charge.

Now, as a babyfaced white dude in a college town I was unlikely to get anything more rough than a slap on the wrist. The smart thing to do would have been to sheepishly say hello officer, let him give us the stern talk about smoking that on our own property, confiscate/smash the crude bong my friend had rigged out of some old bottle, and be on our way. I’d had encounters like this before and it always ended peacefully if I just didn’t say much and let the officer have his ego trip.

But for whatever reason, this time, my body decided that the smart thing to do was BOLT FOR THE F*CKING WOODS WITH THE BONG LIKE MY LIFE DEPENDED ON IT

DOWN A STRAIGHT PATH THAT HAD A RIVER ON ONE SIDE

AND A TWELVE FOOT FENCE DOWN THE OTHER

Whatever noxious potion causes your fight or flight response to be tripped is a hell of a drug because there was exactly zero thought put into this plan. As I wildly flung the bottle bong into the underbrush and continued my adrenaline fueled flight, my friend screamed at the top of his lungs, “GET BACK HERE!!! WHAT THE HELL ARE YOU DOING??”

I heard something incoherent over the bullhorn and the reality set in- the path went on straight basically as far as I could see and the pigs would have a direct line of sight to me for maybe another mile before I could even turn left or right. I stumbled to a stop and started shuffling miserably back towards the cop car as I realized my situation could only get worse the longer I ran.

Over the bullhorn, sternly- “Bring back your bongpipe too, son.”

I started rifling through the underbrush, realizing I had no idea when exactly during my 50 yard dash I’d flung the bottle away from myself. I had no hope of finding it in the increasing dusk.

More impatiently, over the bullhorn- “What’s the hold up? Get back here with that bong pipe.”

I screamed back pitifully- “I CAN’T FIND IT I’M SORRY!!”

I felt like I could almost hear chuckling- “Then just get back here. NOW SON.”

I went back, realizing more with each step what a jack*ss move I’d just made, fully expecting to be cuffed and taken in.

As I got back to the bridge, my friend hissed at me, “what the hell did you do that for?? they’ve got DOGS,” and I realized with a chill that I must not have run as far as I thought, and if I had run any further I might have been shredded alive by K9 units. I apologized for panicking and running- “I don’t know why I did that-“, hoping if I looked embarrassed enough he would have mercy.

Oddly enough the officer must have been entertained by my idiot antics because he curtly told us, obviously stuffing down a smirk, to march straight home, to not go anywhere else that evening, and to not smoke in public, and rolled off, without even taking my info.

What’s the dumbest idea you’ve come up with in the middle of a stressful situation?

Spill your guts to us in the comments!