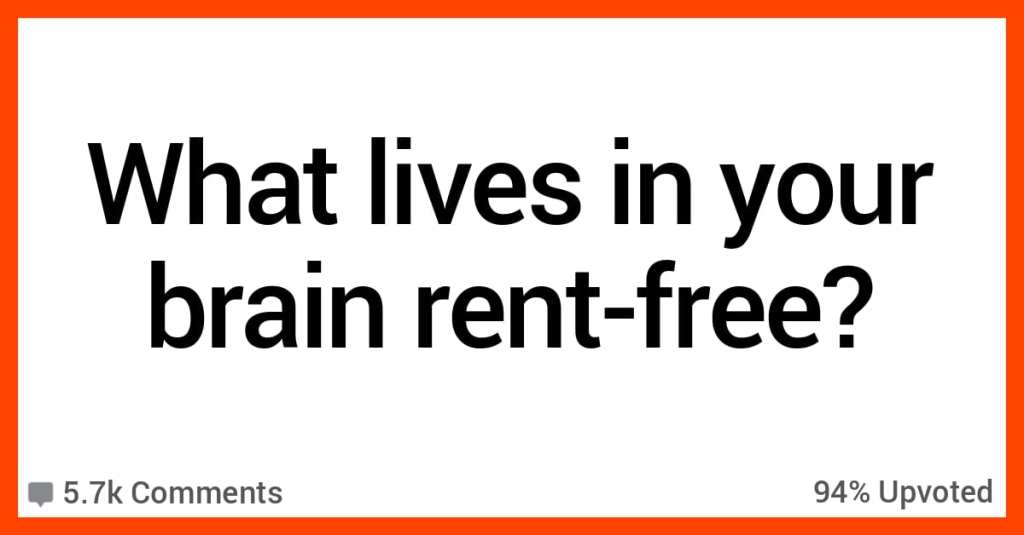 People Admit What Lives in Their Brains Rent-Free

Do you ever have certain things in your mind that you worry and think about even though you know you shouldn’t even be giving them a second thought?

And it kind of makes you a little bit angry?

I think most of us do!

I have several things that live inside my head that I worry about…and I have absolutely no control over any of them.

Folks on AskReddit admit what lives in their brains rent-free. Let’s see what they had to say.

“I saw a man get hit by a train today, the same train I thought about jumping in front of a few years ago. Every time I blink, I see the engineer’s face, realizing what had happened. I see what was left of the man that jumped.

The fact that I saw what could have been my last moments play out in front of me is heavy beyond words. I have a feeling those images and sounds will be camping in my mind for a while.

The man who jumped didn’t even make a sound. He was so set in his action.”

“Any song from Hamilton.

It’s been a non-stop musical in my head since my oldest daughter became obsessed with it.”

“The dumb things I did when I was younger.

That I only remember late at night when I’m trying to sleep.”

“The time in third grade where my pants got caught on my snow pants, so when I took the snow pants off, it took my pants off with them.

In front of my whole class. I fell over in the process, so I was just squirming around on the ground, pants around my ankles.

I’m a full grown adult and I think about this no less than once a week.”

“The fact that we actually have no idea if we’re dead or alive right now.

If this is a simulation, we aren’t alive, just functioning.

If we died, this is our brains reliving our lives and our perception of time is warped.

If this is real life and we’re really alive, how do we know for sure? Everything we experience comes through our brain, so how do we know FOR 100% CERTAIN?? Like you can’t even pinch yourself because your pain receptors are in the brain so who’s to say you didn’t make yourself hurt for the sake of convincing yourself?

How do we know we haven’t all placebo-effected ourselves into thinking life is…real?”

Somebody in marketing got a raise for that one.”

7. Make time for your loved ones.

My grandpa passed away last year. We were always very close, but he lived in a different state. I visited a lot as a kid, but once I became an adult I just could never seem to find the time.

Sitting at his funeral, I realized, it had been 10 years since I’d seen him in person. It’s become my motivation to make time to see the people I care about.”

“The fear that I’m too big for anyone to love. I used to be a size 8, and in 8 months I gained 80 pounds and eat nothing but crap.

I’m stuck in this rut that I’m almost afraid to get out of. I want to feel better, but I’m scared to commit.”

In short. Too much. Waaaaaay too much. You?”

“The Houston Astros cheated the Los Angeles Dodgers out of the 2017 World Series title.”

My science teacher drilled the five main clouds into our brains, and now every morning when I look up I automatically think about what clouds are in the sky and if they could change due to the barometric pressure.

What lives rent free in that brain of yours?