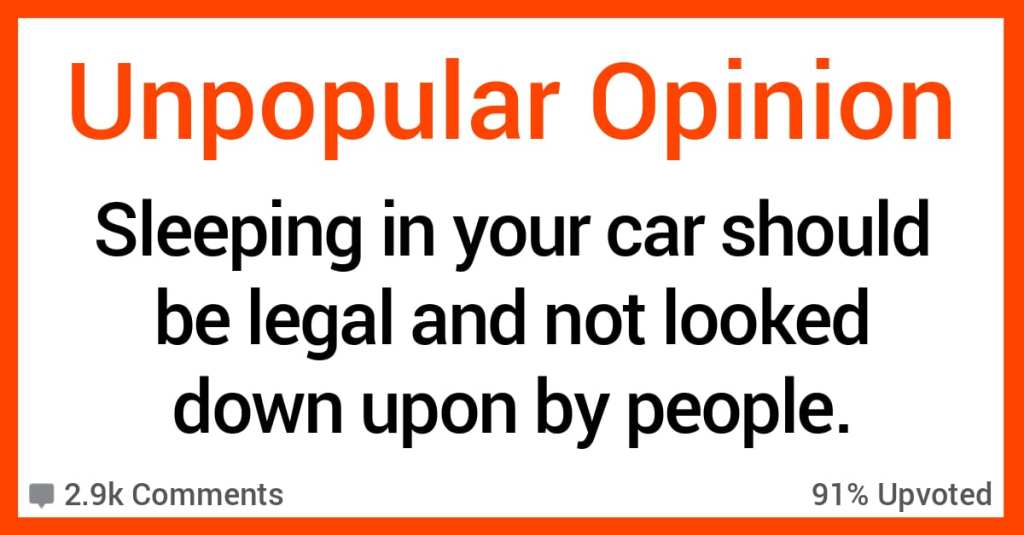 People Discuss the Statement, “Sleeping in Your Car Should Be Legal, and Not Looked Down Upon”

I’ve never LIVED in my car, but I’ve had a few nights when sleeping in my car was the best or the only option and I snoozed the night away in the backseat on a side street somewhere.

So why is there such a stigma around sleeping in our vehicles?

AskReddit users discussed whether sleeping in your car should be legal and shouldn’t be looked down upon.

“To me it makes no sense that you can’t legally sleep in your car in certain places. Like sure if you’re on someone else’s property you should find a better spot.

But there are whole cities where it is flat out illegal to sleep in your car on public property overnight. You own your car, it should be your decision if you can sleep in it.”

“It’s liability issues, but I agree with you.

If I was traveling around the country I’d hate to have to pay for a bunch of hotels when I could just chill in my car for a couple nights.”

“You just have to have the right car, correctly set up. If they can’t see or hear you in the back of your vehicle, and if they have no reason to believe the vehicle is occupied, you’re golden.

I’ve done this with a cargo trailer that I set up inside as a camper with a bed, fridge, microwave, etc. Also, car camped for a while with a Honda Element that I put curtains over the windows. A panel van would work well too.”

4. From someone who’s been there.

I also had a job delivering sandwiches so it worked out. I usually slept in Walmart parking lots and never got bothered unless i parked literally anywhere else. Ive never had more run ins with the cops than when i lived out of my car, but on the flipside, they were all very understanding and never wrote me any tickets.

Living out of your car is very scary at first, but you get used to it and it is very eye opening/ enlightening. You get an outsiders perspective of the rat race. Everyone around you is in busy mode, chasing the next dollar just so they can afford a place to put a mattress.

In the city, sleeping is the only thing you’re not aloud to do anywhere else besides a home. You can literally do everything else you need to do to get by.

Living in your car gives you this sense of freedom that you’ll never get anywhere else besides an RV i suppose and even then, i would imagine you could get stuck in bed like you do at home. When you wake up from sleeping in your car, you’re up and ready to take on the day.

There is no sleeping in really because when you wake up you have to find the nearest bathroom before you sh*t your pants. The cleanest bathrooms that you can go in without looking weird because youre not buying anything are at the dollar tree. But they open at like 9am so i would always have to use Walmarts when i woke up. I will say, thunderstorms are pretty f*cking scary when you live in your car.

Every storm feels like a f*cking tornado is about to blow you away. But yeah. There are a lot more people who live out of their cars than you think.”

“I’m convinced the money hotels make from sleeping in a car being illegal is a contributing factor to why it’s still illegal.

Also, the general hatred of poor and homeless people in this country.”

“Truck stops can be safer but it depends on where you are at.

Theres no way in hell id sleep at the TA truck stop off I 95 near New Jersey nor the one in Baltimore. Hell most of the truck stops whether they’re part of the Big 5 (Loves, Travel Centers of America (TA), Pilot, Flying J and Petro) or not, i wouldn’t stay at in the north east at all.

They’re incredibly unsafe, most are dirty and if you attempt to camp out via an RV or even just a tent and your car, you’re likely to have some very unwelcome attention from not just the truckers but also the truck stop employees and locals….. Most truck stops now will absolutely boot or tow your car/pickup if you are parked there for more than one or two overnight visits.

As for parking at Walmarts… No. Absolutely not. You cannot park, camp or stay overnight in Walmarts any longer due to the issues that are brought about by such things… Namely idiots leaving trash, dead food out in the parking lot, people using the parking lot as a bathroom, abandoning pets and just trashing the place for no reason (since there are trash cans everywhere).

Most Walmarts that allow you to camp out or even sleep in your vehicle on their property are very few and far between. Even asking management before you head to bed won’t do any good if theres a city ordinance that says no camping… Since 95% of Walmarts lease their land from the cities they operate in.

“I’ve watched too many horror movies and documentaries to sleep in my car on the side of the road.

8. I don’t think that would fly here.

“Apparently in a lot of Scandinavia they have “wanderer’s laws” or something that allow you to camp and forage on even private property in most cases.

Kind of an interesting concept.”

And you must be low impact unless otherwise stated (no fire, no garbage left behind, no destruction of the property). Sadly, it only takes a few to ruin it for everyone else.”

“I don’t want homeless people sleeping in front of my house.

I want my tax dollars to provide safe and adequate solutions for people.”

“This was actually a big thing where I grew up.

It was a very safe, upper middle class area with very little crime to pursue. Police spent a lot of their energy trying to hand out DUIs, but also fined people for sleeping in cars or leaving their car overnight.

“This is the reason right here. So many laws exist to force you to have to spend money on things.

“What you found a way to live that doesn’t force you to rely on consumerism and capitalism and doing work for you that makes you money that pays me less than I’m worth? To buy goods and services and products I don’t actually need and could find ways to do without paying?

“There are tons of places in the US where you can, but most only allow you to stay for a night.

Cracker Barrel, Walmart, Home Depot, etc., you just have to check for signs prohibiting overnight stays. I’ve parked my RV overnight in all of those places. Rest stops as well.

In smaller cities without big box stores, simply asking the local police if its OK always worked, especially when I mentioned getting a little too tired to drive.”

How do you feel about this?

Should people be able to sleep in their cars legally and without judgment?

Tell us what you think in the comments. Thanks in advance!