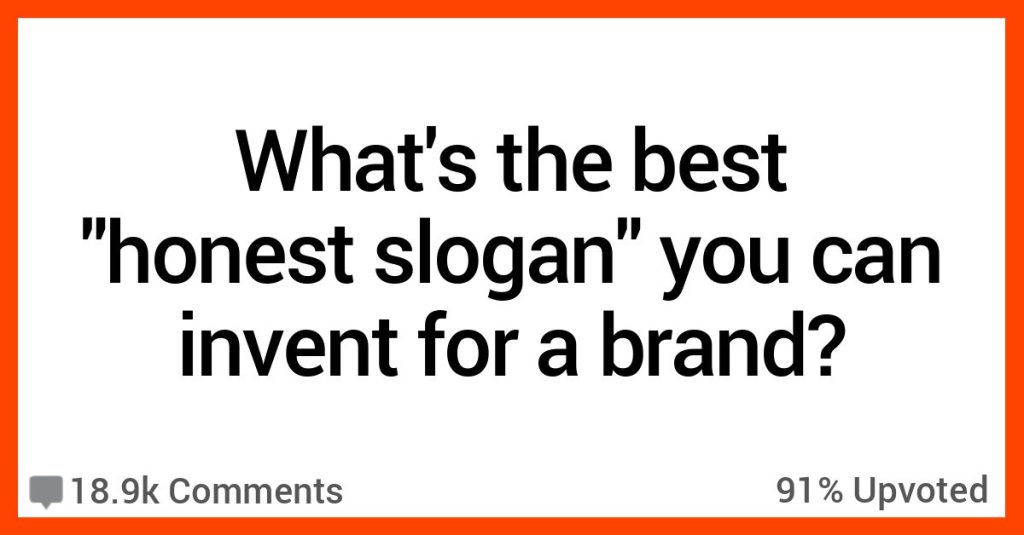 There are all kinds of brands out there that we encounter on basically a daily basis, and even though there might be plenty about them that we don’t love, the truth is that we’re never going to stop buying, eating, or using them.

They’re kind of like old friends, honestly, which means we’re allowed to give them a good-natured ribbing – like these 20 people coming up with “honest slogans” that put the truth back in advertising.

FedEx : our drivers take out their anger on your items.

It ain’t just the drivers. I used to deliver for Parcel Farce and the guys emptying out the 40’ trailers were insane; parcels would arc thru the air as they got lobbed into the right cage- one morning I saw a 42” Sony flatscreen lazily pirouette 12’ thru the air, coming to a crashing halt… into the cage for my route.

Went and told my supervisor and was told to, “give it a good shake on the van so that all the glass settles to the bottom of the box so it doesn’t make a tinkling noise- that way the customer won’t know until they’ve signed for it”

Yeah, no. Told the customer that I believed it damaged in transit (gave it a shake for them) and walked them thru the refusal process.

And it’s cheaper than a nanny… sort of.

Nobody cares about how Coca Cola is doing, they just ask “Is Pepsi OK?”

It’s where you pay a little more to avoid going to Walmart.

Steam: remember that over 70% of your games are unplayed.

gucci: being expensive is literally our entire marketing strategy

That could apply to other luxury brands really. Oh, look a supreme brick that costs more than a hindred bucks.

Pretty sure I heard a comic say this one

“you’re worth less than the data you produce”

EA: where your £40 outlay buys you the opportunity to buy the rest of the game.

Hewlett-Packard: “Fuck your scan, you’re out of Cyan.”

Geez, thanks folks. That line has been inside my head so long it’s in black and white, no clue where it came from.

Tinder: Pay extra to stop us from cockblocking you.

This is most dating apps now. Even Bumble and OkCupid. I gave up on all that. I remember when they were all free now they prey on desperation.

These are as funny as they are true, I swear. I couldn’t come up with anything better.

If you think you’ve got an honest slogan that belongs on this list, share it with us in the comments!