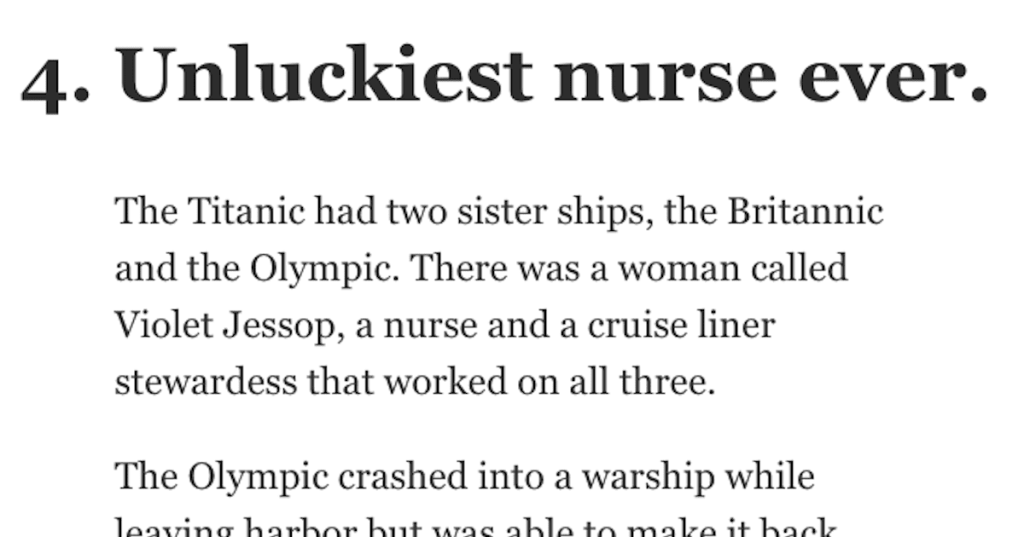 Do you want to know ALL the info?

Well, that’s impossible, but today we’ve got 14 crazy facts to wrap your head around.

There are more chickens in America than people on the planet.

The Titanic had two sister ships, the Britannic and the Olympic. There was a woman called Violet Jessop, a nurse and a cruise liner stewardess that worked on all three.

The Olympic crashed into a warship whilst leaving harbor but was able to make it back.

She was on the Titanic as it sank and is referenced in the Titanic film, a stewardess that was told to set an example to the non english speaking passengers as the ship sank. She looked after a baby on lifeboat 16 until being rescued by the Carpathia the next day.

It’s not known what exactly caused the sinking of the Britannic but the lifeboats hit the water too early. As the ship sank, the rear listed up and a number of the lifeboats were sucked into the propellers. Violet had to jump out of the lifeboat she was in and sustained a serious head injury, but survived.

She was on board for all three incidents in the space of 5 years.

She went back to continue to work at sea for another thirty years before retiring in 1950. She died of Heart failure in 71.

If the sun were scaled down to the size of a white blood cell, the Milky Way galaxy would be the size of the continental United States.

The vastness of space is mind boggling.

That’s about 3 bombs an hour. Every hour. For the entire year.

In 2017, the US had already dropped more bombs than that by September.

Macaulay Culkin is now older than Catherine O’Hara was when she played his mom in Home Alone.

France was still using the guillotine when the first Star Wars film came out.

Next to the US army, Disney world is the largest buyer and importer of explosives in the USA.

The first electric car was invented at the end of the nineteenth century and it went 65 mph.

China used more concrete in 3 years than the U.S. used in the entire 20th century.

The Moon orbits us from the west to the east, but we see it move across the sky east to west because of the rate of the Earths rotation.

Our observation is like being in a faster car watching a slower car (heading in the same absolute direction) fall further and further behind us.

There are more tigers privately owned in Texas than tigers in the wild.

The US navy has the second largest air force in the world.

Mind blowing, right? Who would have thought that a nurse could be THAT unlucky. Wow!