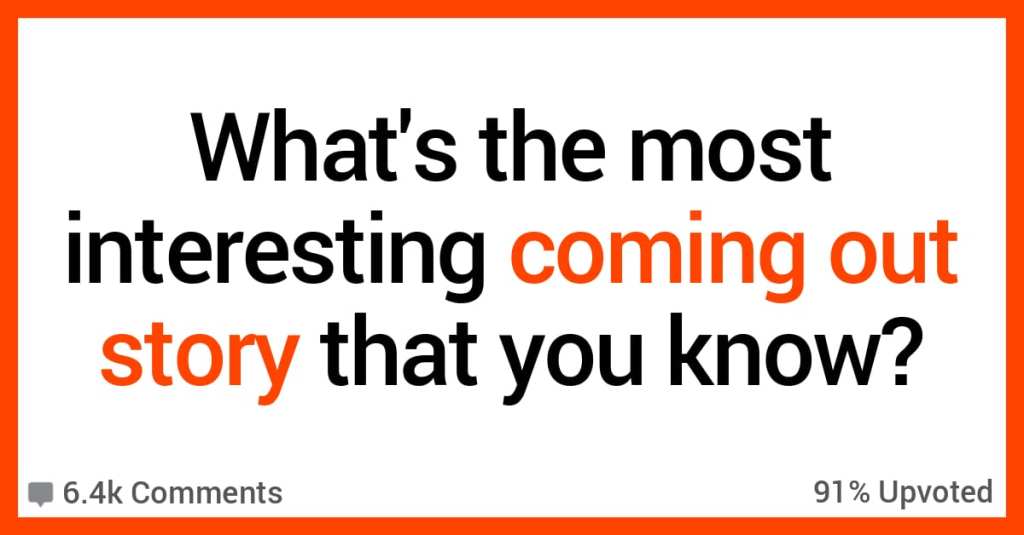 As society becomes more and more tolerant, a lot of people out there probably have less of a hard time coming out of the closet to their family and friends.

But it’s pretty obvious that it’s still a big moment in a person’s life and they must grapple with that decision for a long time due to fear and uncertainty about how their loved ones will respond to the news.

Are you ready for some interesting coming out stories? Take a look at what these folks on AskReddit had to say.

“I was on a road trip with my parents and was in charge of music selection.

After the second Boys Boys Boys they asked, “Sweetie, are you trying to tell us you’re gay?”

I mhmm’d, and we don’t really talk about it at all, since it’s really not a big deal.”

“When I told my dad, I didn’t know that my little sister had come out to them the week before. So I think he was more dazed than anything else.

Also, I had just broken up with my boyfriend, so I came out by saying I might like to date girls next.

My mom thought I was joking, and said “Oh yeah, I always say that life would be so much easier if I could date women.” My dad cuts in and goes, “She’s serious.””

So she pushed me about it and told me I could tell her anything. When I told her, it became evident she thought I was being bullied at school or that I was having problems with my friends. It was kind of hilarious now that I look back, her face was priceless.

She tried making up excuses, saying about how I’m just “reading too much.” And, of course, she asked if I had s*x with a guy who made me confused. She then said I had to “prepare” to tell my dad because he was “going to flip.”

She insisted I stay upstairs while she explained it to him so I could go and talk to him after. She then came up and frantically explained to me “you have to be careful, don’t you dare start screaming this is a serious issue.”

So I did, not really knowing what to expect, and his words were “So I really didn’t see the big deal. Your mom interrupted my reading to tell me that?”

“My friend was really afraid to come out to her conservative father. She thought that he’d flip because they’re kind of the redneck type.

Finally, she got up the courage to just do it. Expecting the worst, she told him. His reaction?

“I accept it. Please don’t bring home a girl like Snooki.””

“My father caught me with another guy when I was about 16. About three weeks later, he took me to a hooker to straighten me out.

She was very nice and we got drunk playing gin rummy, while drinking gin. We didn’t have s*x.”

“Came out to my parents.

Asked them to sit down because I had something important to say. Told them I was gay. They barraged me with every line from the book like “no son of ours is gay”, “you’re going to die in your 30s from AIDs”, “gays aren’t productive in society”, “you’re worthless”, “you’re such a waste”, etc etc etc.

To this day, they hate this about me. They currently think that my extremely straight best friend is gay, and that we’re dating and f*cking like rabbits. Also, not allowed to have any guy, even family, step foot in my bedroom.”

“I have a friend who was outed in the most spectacular fashion I can imagine.

He was in college, living at home. He told his parents he was going to work at Ruby Tuesdays one afternoon. Something came up at home, I forget what, and they tried calling him at work. The restaurant said he wasn’t working that day.

So they flipped out, wondering where the hell he was. His cell phone was turned off. So his sister logs into his computer and finds an email saying he’s meeting some people at a club tonight. The family loads into the minivan to go find him. This club, unknown to them, caters to the lgbt crowd.

They walked into the club, and there he is, on a runway, dancing in full drag. His family was stunned, to say the least. Happy ending, though: they’re totally cool with it now. I think they were more pissed about the lying to them than anything.”

“I’m a bis*xual, and came out to my parents while at dinner out one night. My dad said “I’d kind of assumed it” and my mum was shocked “how did I not know?” and then assumed I was saying I was fully gay.

They were both fine with it, if not pleased because they knew I was happy if I was telling them. In my explanation I said “It doesn’t mean much but now there’s just a chance that you’ll have to rely on my brother for grandchildren” and my mom said “that’s okay, we didn’t want any from your last boyfriend anyways!”

Just tonight told them Ive got a girlfriend. They are practically giddy, wanting to meet her, but trying to act cool. It’s okay though because I’m positively giddy about her too.”

“Finally mustered up the courage to tell me parents I had been dating a guy for over a year. They gave me a duffle bag and said take whatever you can fit in there and don’t ever come back.

That was a year ago and honestly it was the best thing to ever happen to me. I was supposed to be a college senior but I ended up moving in with my boyfriend and broke $100k as a college dropout my first year out on the job!”

For a year or two i wasn’t sure what to do about it, i never acted on it.. Most my life i had was never really attracted to any girls or anything, sure i dated a few and even had s*x with one.. I decided i needed to move out of Alaska and go “be gay” someplace else. New area i could be whoever i wanted and i would be thought of as always being that way.

My father looked at me and smiled, he didnt say anything for about 10 seconds, tears formed around his eyes and he said quietly “I’m so glad you could tell me that, i love you no matter what” We then proceeded to get very drunk on Alaskan Pale Ale and he told me about his one time “gay experience” and how it wasn’t his bag. lawl..

Dads been so cool.”

“Coming out pretty much killed my second year of college (this past year).

My parents took it pretty hard to start (my mom was convinced I had a brain tumor), but became very accepting. Most of my friends took it really well, but my best friend of 6 years didn’t.

He started telling random people at parties about how I was gay, and since I went to a very gay-unfriendly school, things got pretty ugly.

I eventually had to just stop going out because I was being threatened by people, and actually got assaulted once. One night, some people in my dorm wrote “go home f*ggot” in huge letters on my door. I ended up going from a 3.6 gpa to a 2.3 because I just couldn’t deal with all of that sh*t.

I’m back home now, and things are a lot better. I’m taking a year at a community college to get my grades back up and then transferring to a better school.”

“I’ve always known I was gay, but didn’t really accept it until I was 13, when Matthew Shepard was killed.

I remember my father saying, “Those boys went easy on him, I would of set his f*ggot *ss on fire.” My father had never said anything like that before (the country had never dealt with anything like it before) and instead of telling him right then and there, I was a coward and agreed with him.

I felt terrible… This young man was tortured and killed for being just like me, and I felt awful for celebrating his death out of fear of what my dad would say/do. Every time the news talked about him, his parents, the men who did it, I would begin crying. My mom became concerned and asked if I wanted to talk. I crumbled.

She thought I was just upset over how he died and when I said, “Not how, why,” she stiffened and asked what I meant. I told her I was gay and she (in shock I guess) said nothing and left the room. My father asked me to talk with him a few hours later, and I was already prepared to get kicked out.

We sat outside on the deck and he immediately begins crying. Apologizing for what he had said about gays and Matthew Shepard. He told me how he loved me so much and his biggest fear is that someone would hurt or kill me for being gay. He said nothing would ever make him not love me and that I should be open and honest, for Matthew.

48 hours prior, he didn’t care about a death on the Wyoming prairie. Now, he was telling me to be proud of myself, to stand up and fight for myself and my community, to be happy with myself.

My mother (old world Polish) isn’t really ok with it nor is she against it. She doesn’t talk about it or acknowledge it. Thirteen years later, my father is still my biggest supporter. In a way, he got the son he always wanted.

We fix cars, fish, go hunting, are fanatics about Chicago sports and talk about women and how they drive you nuts. He’s active in PFLAG and the HRC, which is something I never expected.

It really does get better…”

Do you know of any interesting coming out stories?

If so, please share them with us in the comments. Thank you!