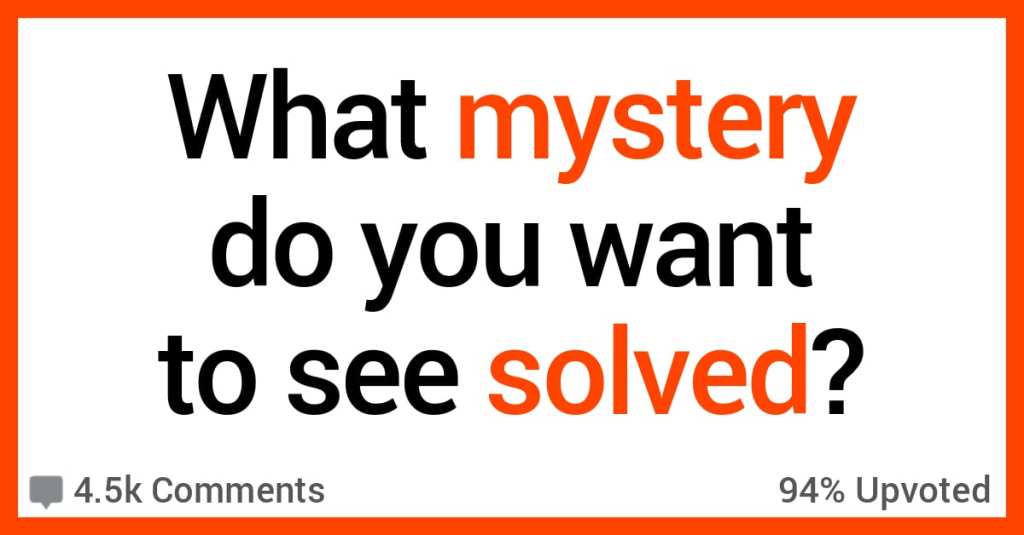 But that’s part of the fun of it…

People on AskReddit talked about the mysteries they’d like to see solved.

“The disappearance of Madeleine McCann.

There’s loads of theories about what happened to her, but I’d like someone so definitively prove what actually happened.

I remember her disappearing 15 years ago when I was in school and seeing posters of her in my local shop, it all seemed so surreal.”

“I went to high school with Chandra Levy. Only met her once.

Still extremely sad and I know they’ve had suspects who confessed to her m**der but I don’t think it was ever actually solved?

My father met her parents years later and they were obviously just destroyed. Walking around in a haze it seemed.”

“Did Hitler really die in 1945 or did he fake his d**th and escape to South America where he lived out the rest of his life?

There’s a few bits of evidence to support this theory.”

“What happened to Kyron Horman?

He went missing from Skyline Elementary School in Portland OR, was seen that morning at a science fair and went missing seemingly while walking to class. His stepmom was a huge suspect in the case, apparently tried to hire a hit on her husband, Kyrons dad.

There’s a lot of speculation around why and how she did it but we just don’t know. It’s definitely a rabbit hole of a case but it k**ls me that we don’t know anything.”

“JonBenet Ramseyjust because I am so tired of hearing about it.

I was in Colorado when it happened and never stopped coming up.”

Who was he, who k**led him, why was he k**led & what was the significance of the Rubaiyat?

My theory is that he was an undercover CIA agent, doing something questionable, when he was k**led the agency decided to destroy any evidence of the link & deny everything, cause it was easier than explaining why he was there.”

“What actually is dark ‘matter’?

There are so many speculations of what it could be, but we just don’t know. It’s makes up over half of the universe.

“Is the Loch Ness monster real?

I will find you Nessie, mark my words.

As a Scotsman I will be on the front line!”

“That Gardner Museum that was robbed in Boston.

It was a documentary on Netflix recently and surprised me that they still don’t know who did it and why they did the weird things that they did in there.”

“The inconsistencies surrounding the JFK assassination.

And the Warren Commission report is clearly not up to the task.”

The families of all involved have no closure & it is truly terrifying the circumstances around how the airplane went missing.”

Damien Echols, Jesse Miskelly, and Jason Baldwin (The West Memphis 3) were tried and convicted for the m**ders and eventually accepted an Alford Plea to be released.

I’ve seen the different documentaries and read the books, including spending hours on the Callahan site, pouring over “evidence” and I’m not 100% convinced either way.

I would love to know the truth, as would a lot of other people.”

I live in Iowa not far from where he was taken; it was ABSOLUTELY the West Des Moines police. I watch too much true crime and the one thing that scares me the most is child trafficking.

He’s in his 50s but I want to know his story from the time he was taken until now. Also f**k traffickers and the p**os who pay for it.”

Okay, friends, now we want to hear from you.

In the comments, tell us about the mysteries that YOU want to see get solved.