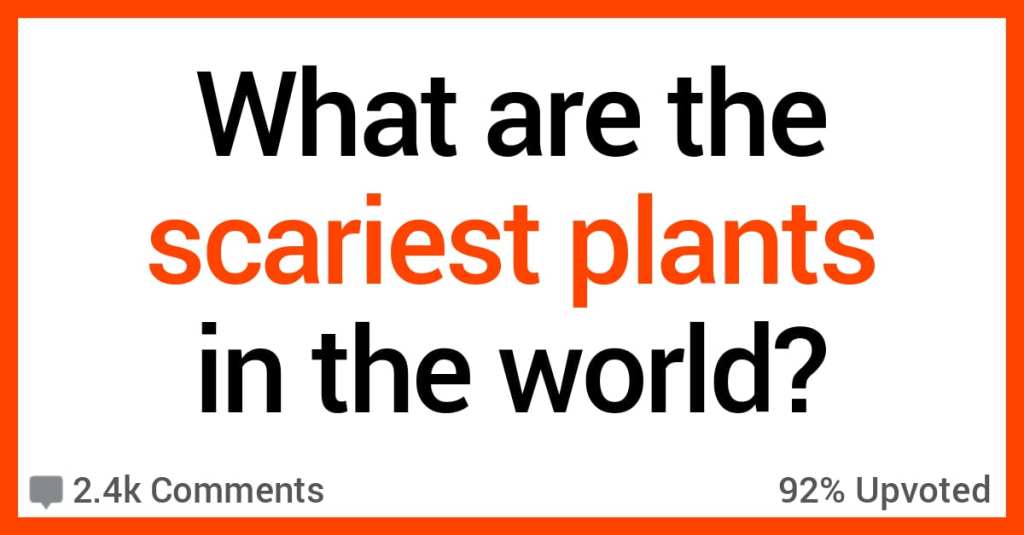 Nature can be kind of horrifying, huh?

Yes, of course it’s magnificent and gives us so many gifts, but when you read about dangerous plants like you’re about to, it makes you a little paranoid.

AskReddit users talked about what they think are the scariest plants in the world.

“State authorities in Michigan warn against trying to cut down a Giant Hogweed. The sap will spray in an aerosol and get on the skin or in the eyes.

There are also little hairs on the stem that will fly around when disturbed. They say to inform the state Dept of Agriculture (I think), who will send out a specialist who will dig it up for you while wearing a space suit.

These were imported as ornamental plants!”

Just a quick touch of it is painful.

It has been recorded as the cause of several s**cides if I remember correctly.”

Back in the 7th grade my uncle chopped down a tree that had some growing all over it, and the next day he had it on a trailer. I came over that day and I put my hand on the log out of all places while talking to him, not noticing the black sap on it as it got all over my hand.

With me being a nail biter, I started to bite my nails. I washed my hands shortly after but the deed was done. The next day I wake up for school and my mom noticed my face was swollen and had a rash. She said I looked like a kardashian because of how swollen my lips were.

After 2 days of staying home from school and taking steroids, the swelling went down but not the rash. I went to school and kids still made fun of me saying I had herpes.”

These are kind of creepy because the berries really do look like tiny little eyes. The first time I saw one was real late in the year and the foliage had already d**d off, so there was just a red stalk with white eyes on it.

It is also very poisonous and will cause heart attacks if you eat the berry.”

“The scariest plant to me is poison ivy.

We do have Hogweed where I live, but they’re pretty obvious and relatively easy to avoid. Poison ivy on the other hand can be remarkably easy to overlook.

You get that oil on you and it can spread everywhere. I’ve had large portions of my body covered several times. (Yes, even the genitals.)

Usually I didn’t even know I’d come in contact with the stuff. So to me that’s the scariest plant in the world.”

Its a big spiky stick that grows in clumps and hurts like a SOB if they prick you.

Also they grow fast and are hard to get rid of when they get established.”

7. Probably best to stay away from it.

The hallucinogenic effects of Brugmansia were described in the journal Pathology as “terrifying rather than pleasurable”. The author Christina Pratt, in An Encyclopedia of Shamanism, says that “Brugmansia induces a powerful trance with violent and unpleasant effects, sickening after effects, and at times temporary insanity”.

These hallucinations are often characterized by complete loss of awareness that one is hallucinating, disconnection from reality (psychosis), and amnesia of the episode, such as one example reported in Psychiatry and Clinical Neuroscience of a young man who amputated his own p**is and tongue after drinking only 1 cup of Brugmansia tea.

Psychosis so severe a man amputated his own p**is and tongue. Like WHAT.”

“The manchineel tree is a tree that almost literally exists to k**l you.

Every single part of it can k**l you.

Even touching it or standing under it during rain can hurt you.”

“I’m surprised no one has said poison sumac.

Fairly common in Michigan, kinda hard to tell the different from normal sumac, and brushing against the bark, leaves, whatever, can cause a severe enough reaction to require admission to a burn center.”

“The mushroom Destroying Angel Amanita virosa is one that gave me nightmares.

It stops DNA replication in cells causing them to die affecting mainly the liver and kidneys. It takes hour for the symptoms to show up and by that time the damage is done. Usually the only recourse is a transplant.

It can look like a normal edible mushrooms if picked before maturity so it gets accidentally consumed.”

It won’t k**l you if you can move but if you’re another plant it’ll just smother you to d**th. And it’s a never ending battle trying to control it. Setting it on fire just makes it happier.

There’s too much to rip out by hand. You can’t really dump what you rip out anywhere bc it will just start growing there. It’ll swallow whole cities if given a chance.”

“So for all of my Aussiess on here, you’re about get some PTSD from your childhood from what I’m about mention.

Cats-eyes. Bulls-eyes. Bindis. Whatever you call them, you know their shape. A small brown seed with three big spikes coming outta it.

If you’re unlucky, the spikes break off in your skin and cause infections. If you’re lucky, you feel like you’ve stepped on the worst lego of your life.

Truly a plant meant to cause the worst pain and make you wish you had a flamethrower handy. F**k them to the moon.”

What do you think are the scariest plants in the world?