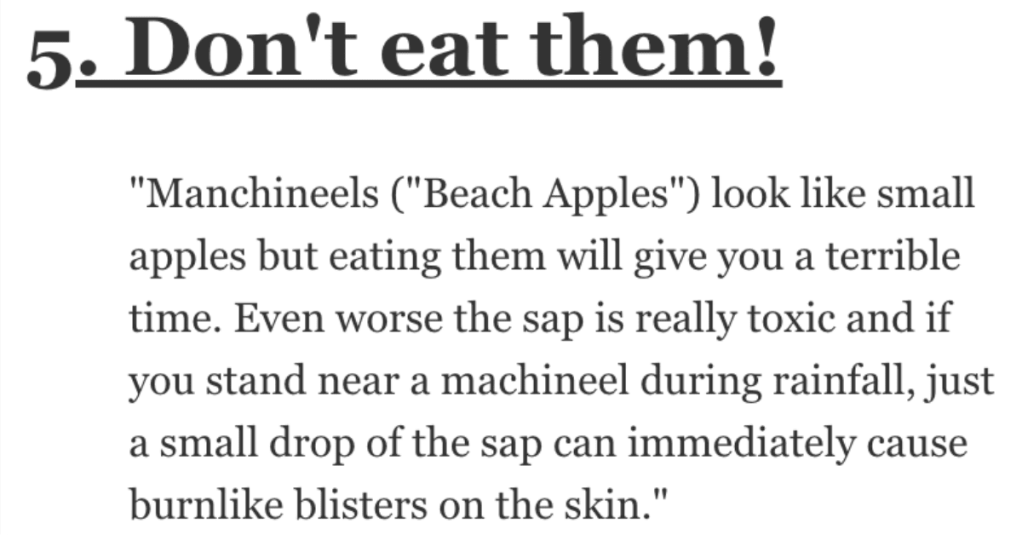 What Are the Scariest Plants in the World? Here’s What People Had to Say.

I’ve always said that if I ever get stranded out in the wilderness or on a desert island, I’m screwed.

I’d be screwed for a number of reasons, but one of the big ones is that I know that I’d end up eating a plant that would be poisonous and that would be the end of this guy.

What are the scariest plants in the world?

It can be fatal when even small amounts are ingested and resembles other non-toxic plants that are edible. Even just touching your lips or skin to the plant has been fatal for children.

It causes swelling in the brain, blood coagulation problems, tremors, seizures, kidney failure among other issues. Death is usually caused by respiratory arrest and/or ventricular fibrillation.”

It’s like forager roulette: you either get wild carrot or poison hemlock.

Such is the reason I don’t f**k with these plants in the wild.”

Sap can cause severe burns as it essentially removes all protection of your skin to UV.

Here’s a nice quote “I started rubbing my face, I thought it was just a little bit of skin at first, but then big chunks of my face were falling off.””

Merely brushing the leaves or stalk can inflict pain.

Another lovely quote “A casual split-second touch on an arm by a leaf or stem is enough to induce pain for hours or days … pain reminiscent of having the affected body part caught in a slammed car door”.

“Manchineels (“Beach Apples”) look like small apples but eating them will give you a terrible time.

Even worse the sap is really toxic and if you stand near a machineel during rainfall, just a small drop of the sap can immediately cause burn-like blisters on the skin.

Some people say that the sap is so toxic that it even destroys car paint. If you get sap on the hand and then in a moment of temporary dumbness touch your eyes, you could get blind.

The Spanish call them “Manzanilla de la muerte” which translates to little apple of death, although no deaths in modern times caused by Machineels are known.”

“Giant hogweed was the first that comes to mind for me also. I was told about it by a supervisor last year.

She basically told me I probably won’t run into it because it’s pretty rare in our region, but that it could make your skin photosensitive for life.

The possibility of lifelong consequences from simply brushing against a plant scared the s**t out of me.”

There was one story of a poor soldier relieving his secondary port in the bush and reached for a leaf to wipe.

Cue the gympie covering his chute with what can only be described as Satan’s cereal.

The pain can last month’s or even years if encountered that severely.”

“I’m a little surprised nobody mentioned this one, but Hura crepitans, or the sandbox tree. It’s covered in poisonous spikes and has exploding fruit.

When its fruits are fully matured, they drop to the ground and explode like a grenade. This explosion can send its seeds flying up to 150mph/241kph.”

The Jumping Cactus. This isn’t one of those super poisonous plants or something that will blister you. This is something that just shows nature is a freaking A**HOLE.

So what’s this thing do? If you get too close to it, the tips will break off and stick to you. Pull it out? It fu**ing HURTS. Why does it do this? Because they can reproduce as**ually that way. Thats’ why there’s a field of them usually.”

“I don’t react to poison ivy and neither does my brother.

After weeks of steroids it finally healed, but the calamine lotion didn’t really help much.”

“Venus Fly Traps are scarier than you’d think too. I saw a video on youtube once of a man who thought it’d be fun to tape one of the traps to his fingertip.

His finger turned gray, lost circulation, and was being digested in less than 24 hours. The trap wasn’t even attached to the plant at the time. Fly traps aren’t really dangerous to people though, unless you’re an idiot like that guy.

I have seen pictures of some large feral ones in California that had captured tree frogs.”

What do you think are the scariest plants out there?