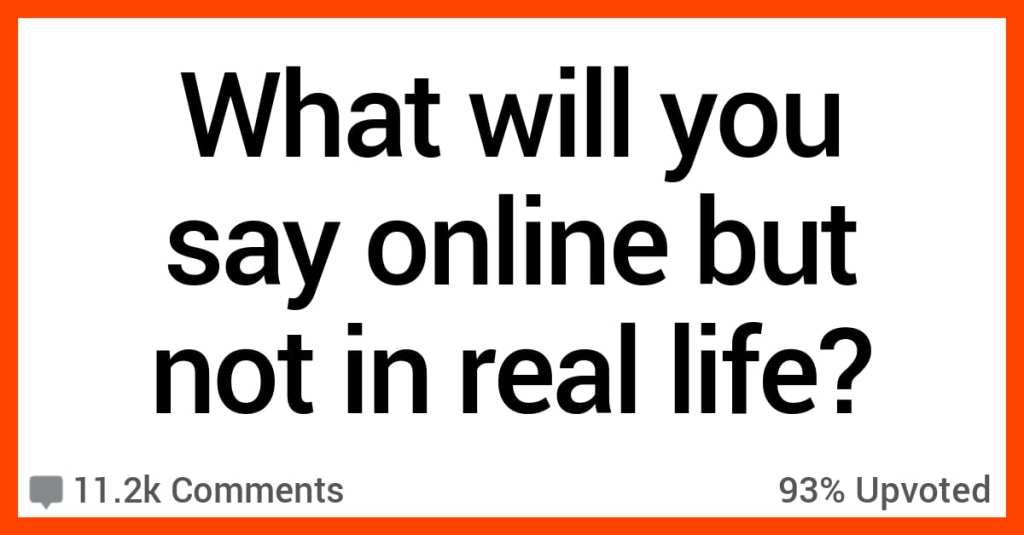 It’s pretty interesting to think about how radically our lives have been impacted by the Internet.

You can literally strike up a conversation with a complete stranger on the opposite side of the world whenever you feel like it.

It’s totally wild…and it’s resulted in some people having something of a split personality.

Folks on AskReddit discussed what they’d say online but not in real life.

Let’s have a look.

“I know what I am to everyone. An afterthought or something to use when needed and then discarded.

I am not oblivious to what is said about me or what happens when I am not around. And it makes my heart ache because there was once a time that I felt surrounded by love.

And the only time I have been touched at all in the last couple of years was a hug from my ex because our animals had d**d.”

“The thought of having to work a job the rest of my life depresses the s**t out of me.

I can’t believe that this is the reality for me and most humans and there’s no way to escape it from it.”

3. Didn’t live up to expectations.

“I am a former over-achiever who has amounted to nothing.

The hopes and pressure from those around me made it harder to realize that being good in school doesn’t mean you are actually smart, and if not for them I might have set my sights lower and actually succeeded at something.”

“I hate falling in love. I’m not single because I don’t want to invest in a relationship, but because I hate to put expectations on another person.

I don’t know, I feel that I create an image in my head when I crush on someone, and invest too much energy maintaining that idea rather than appreciating the person in front of me.

Besides, I don’t want to hassle someone with my emotions, only I am accountable for how I feel. It’s something I’m trying to work on.”

I’ll be 30 in less than a year’s time and I still have no idea what I want to do with my life. I feel like the train has left the station and all the vague dreams I have for my future have long passed me by.

I feel stuck and don’t know what the hell I should do or where I should even start…and the more I think about it, the more frustrated I become, because I just can’t seem to bring myself to start something, ANYTHING. I’m just pretending to be alive, basically. And it makes me sad.”

“I don’t have friends because I truly don’t deserve them, not because I’m bad at making and maintaining friends. I’m just a terrible person.

With a lot of problems, and no motivation to fix them. I deserve to be alone. I don’t even deserve the food I’m eating.

Like I just don’t deserve anything good, because I am all bad.”

“I don’t understand ambition. At all.

I’ve drifted through my life fairly successfully but never really had goals or drive to be a certain thing or achieve a certain thing. When someone suggested something that they thought should be a goal I just went along with it as I had no ideas of my own.

I do have things I like to do, like travel (impossible now) or play video games etc. but ambition to achieve a certain level in my job or training to complete a marathon or some such? No. I don’t get it.”

“I understand zero of what NFL commentators are saying. Am American, have been watching football for over 15 years.

No idea what an play option or a screen pass is. Nobody in the NFL explains anything. They just assume every viewer has played at the college level or above.

The MLB during the World Series is a great example of educating the viewer. I wish the NFL was more instructional.”

A friend told me it’s a phase and IDK if it is or not but it’s the kind of thing I don’t normally tell random people on the street.”

“Despite being “successful” at life in the eyes of friends and family by having a career and being able to live on my own, I don’t recall the last time I felt happy.

I suppress the s**t out of my depression.”

“I have really bad anger issues that I can hide so well.

Sometimes I just want a good scream while beating the f**k out of something but I stay quiet because that would be rude. I

haven’t had a good scream in a while or even hit something hard. I miss my punching bag so bad.”

I was one of the smartest kids in class, and most likely to succeed. After a failed attempt at college, I spent the greater part of a decade doing basically nothing, to the point that I lost contact with lifelong friends (who I’ve yet to reconnect with).

It’s only now that I basically forced myself to move out of my mom’s house that I am picking myself up piece by piece and doing something with myself.

Related: I am d**thly afraid of having to move back in with my mom because I feel I’ll fall back to that old habit of doing nothing.

I love my mom, but I think I’d break her heart if I even insinuated that environment is part of the reason I feel like I do.”

What would you say online but not in real life?