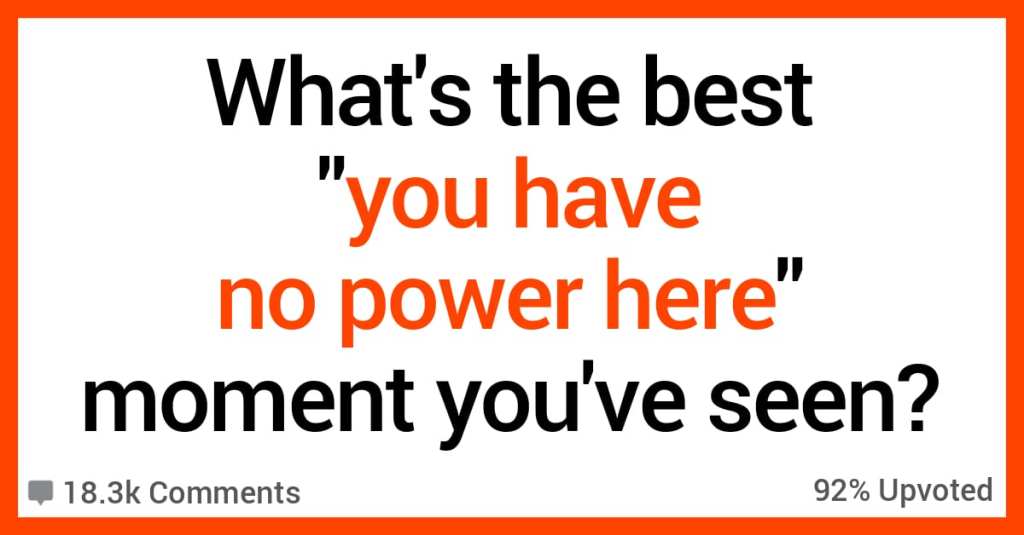 Isn’t it SO satisfying when people who think they own the world are brought down to Earth in excellent fashion?

You bet it is!

And that’s why we think you’re gonna love these stories of people being told, “you know what? You have no power here!”

This is gonna be good!

Let’s check out these satisfying stories from folks on AskReddit.

“I used to work for a terrible manager when I worked at McDonalds.

This guy was horrible to us. He was constantly bullying us, sh*t talking us TO CUSTOMERS, and doing everything in his power to make us miserable. Well, so many people complained about him that he ended up getting fired.
New manager was great. He was super chill and understanding with us all. A couple weeks after he took over, the old do*chebag comes in and starts talking about how terrible the store looks, how our service is sh*ttier than ever, and how much this store needs him. The new manager looked at him and said “If you don’t leave, then the cops are gonna make you”

When the do*chebag didn’t move, new awesome manager stuck to his guns and called the cops. The do*chebag is no longer allowed on ANY McDonalds property in the city and has a restraining order against him.”

“The first time I had dinner at my parents house after I got my own apartment.

My dad was giving me grief as usual. Finally, I stood up and said, “ I don’t live here anymore. I don’t have to put up with you this way any longer. I’m going home.”

Most liberating moment of my life.”

“I told my ex I was getting remarried.

He told me he was going to stop me and put a lein on my house (which I bought with my money six years after the divorce). My son would come home from visitations telling me how his dad was going to stop the wedding and I’d have to pay him all of this money, la di da.

Get to court. His attorney goes blah blah blah for what felt like forever. My lawyer (yes, I had to freaking get one) stands up and simply hands the judge the divorce papers showing the disbursement of funds and how my ex isn’t owed anything.

Judge looks at ex’s lawyer and basically asks, “did you even ask for this document before filing?” and dismisses the case.”

4. Get outta here with that.

“I’m a high school teacher who teaches a lot of senior grades and so has to deal with graduation grades, references for university, all that jazz.

I had a parent of a graduating kid in my classroom in June (after final marks were given to students but not formally reported) who was a dental surgeon in town, ran a large operation, donated a lot to local sports…big man in a small town.

I had given his kid a mark in the high B range, and so he marched into my office and started off with the “there must be some mistake” line, which moved swiftly into the “you’re going to change it because I tell you too” to “how much will it cost to get him the A”.

Ended badly, he threatened violence, I reported him to the school admin, he’s now banned from the property.

Mr. “I pay your salary so you work for me you lousy piece of s*it” was threatened with the cops by Mr RandomActPG.”

“Woman complained we wouldn’t fill her clearly fraudulent C2 prescription, brought the brand new store manager back to the pharmacy to “make us fill it.”

“She says you have to fill it.”

“God himself cannot make us fill anything if it fails the checks. No.””

“IT services for a client of mine. They paid for me to come to their office and address a problem. 8 hrs minimum time. The issue was resolved in about 45 minutes, they’d set up something incorrectly and it was pretty obvious once I got into the system.

I was packing up to leave and the client stopped me.

“What are you doing?”

“The system is fixed so I’m headed out back to my office.”

“Right…so anyway, I’m leaving. I’ll notify the office to send you the invoice and in all likelihood we’ll no longer be working with you and withdrawing your lease on our equipment.””

“I wasn’t good at returning library books when I was a kid. I got lectured by my school librarian about it a lot.

Fast forward twenty years and I’m a supervisor at the local public library and my former now retired school librarian goes there. One day I see her sneaking around the front desk instead of coming back to say hi to me and I immediately figure something’s up. I go up to say hi and she acts exasperated and tells me she was trying to avoid me because she had overdue books.

So I put on my reading glasses, pulled them down over my nose, and delivered the same lecture she’d given me countless times about being responsible and turning in books on time.”

“When an unhappy client threatens to go hire a better lawyer.

They don’t seem to get that this isn’t a threat when they aren’t paying me….”

“I joined the Army Reserve in 1983, in between my junior and senior year in high school.

Going to drill one weekend and we were doing war games with another reserve unit.

They mailed everyone a letter with the challenge and response to be let in to the unit.

As a lowly private, I was standing guard at the entrance and had to say the challenge.

Everything’s going good until a city police car pulls up and the cop is a new lieutenant . I give the challenge and he just look at me. I say it again and he said to just let him in because he didn’t know it. He starts getting belligerent and I ask him to turn off the car and step out.

He gets out and starts yelling at me. The Sergeant Major heard the commotion and comes over and tears the young lieutenant a new *sshole.

It was very satisfying to watch and I learned that day that even though a 2nd lieutenant outranks a sergeant major, it really doesn’t matter because the sergeant major had been in for 20 years and didn’t put up with any bullsh*t.”

“A few years ago a guy stopped me in the hardware store and asked if I was a painter.

I looked down at my painters whites and said, yeah I do historical restoration work. He asked how much I charge per hour, and when I told him, he immediately told me I was too expensive and dropped my rate by 25%. I had already given him my number, but he kept belittling me, and saying I wasn’t worth it.

I just told him that I already had a full time job, and this would be in my off hours, so it needed to be worth my while. He finally let me leave the store, then called me 3 or 4 times, each time hemming and hawing over if he wanted to actually use me or not, he’s got a bunch of properties, it would be a sweet gig, but not at those prices.

And I just kept telling him that’s fine, don’t use me if you don’t want to. Eventually I recognized his number and stopped picking up.

He really thought he had some sort of power over me, and I’d jump at the opportunity. Luckily I didn’t have to take the work, I was making good enough money as it was. He would have nitpicked absolutely everything, and probably not paid me at the end anyway.

But he was so certain he’d have power in the situation, that he didn’t seem able to comprehend me not wanting to barter with him.”

“When I was working customer service for a restaurant delivery service (not unlike Door Dash) I had a customer send in a complaint about hair in their food. The hair was sitting on top of the food. I check their account, and they had ONE order on their account, which is a red flag.

I check their phone number and find multiple accounts, each other 1-2 orders, ALL of them complaining about hair in the food. I deny a refund because the customer has actually used the same identical photo for the last order since they ordered the same thing. The customer tries to argue with me, threaten to never use the service again, typical stuff that they always say.

The next day she calls back and tries again and is outside of the refund window, so the customer demands to speak to a supervisor.

The supervisor bans her from the service for multiple fraudulent refund requests.”

“I worked at a grocery store for five years putting up with crazy customers and their awful attitudes.

At the end of my tenure our store was set to be closed, and for the last month the store was sold to a liquidation company. Meaning we were no longer under our parent company’s umbrella and were no longer concerned with retaining customer loyalty.

I got to tell customers “no” and respond with every bit of sarcasm and disdain to every Karen i encountered for one month until the store officially closed.”

13. Not under your roof anymore.

“The guy that i’d gone on a few dates with introduced me to his parents, things went well, or so i thought.

He drives me home, we end up talking and drinking a few beers, i didn’t want him on the road with any alcohol in his system, and i enjoyed his company, so we end up hanging out until 3am.

His mom starts blowing up his phone, demanding that he comes home, so he drives himself home to find that he’s been locked out of his house. His mom said that he can sleep outside, he shouldn’t be spending time with someone like me (still don’t know what she meant by that), and that i’m “just another stop on the p*ssy train”.

He tells her not to talk about me like that, to which she says “when you’re under my roof, i’ll say whatever i want about whoever i want!” so he picks up his phone, calls me, asks if he can stay at my place for a little while.

It’s been seven years, we’re engaged, have a dog, a cat, and a happy life.

i also plan on throwing some subtle train themes into the wedding/celebration after the end of the plague.”

“I was waiting for a friend to finish work – she worked at a restaurant so fancy they had someone vetting guests at a podium outside.

The place was glitzy and the folks were glam so the great and good would descend in droves. Those with a reservation were sent in; prospective walk-ins had to queue.

A car sweeps up, the driver jumps out and holds the door open to unleash a hat and dress. The woman accompanying said finery – a C-list actress from a regional daytime TV show – looked through everyone present and moved to enter. She froze, appalled, when the guest-vetter intercepted, asking “Do you have a reservation?”

She mustn’t have heard the question because she didn’t respond. Instead she drew herself up to the full height of her couture and demanded “Do you know who I am?”

In the comments, tell us about stories like this that have happened to you.