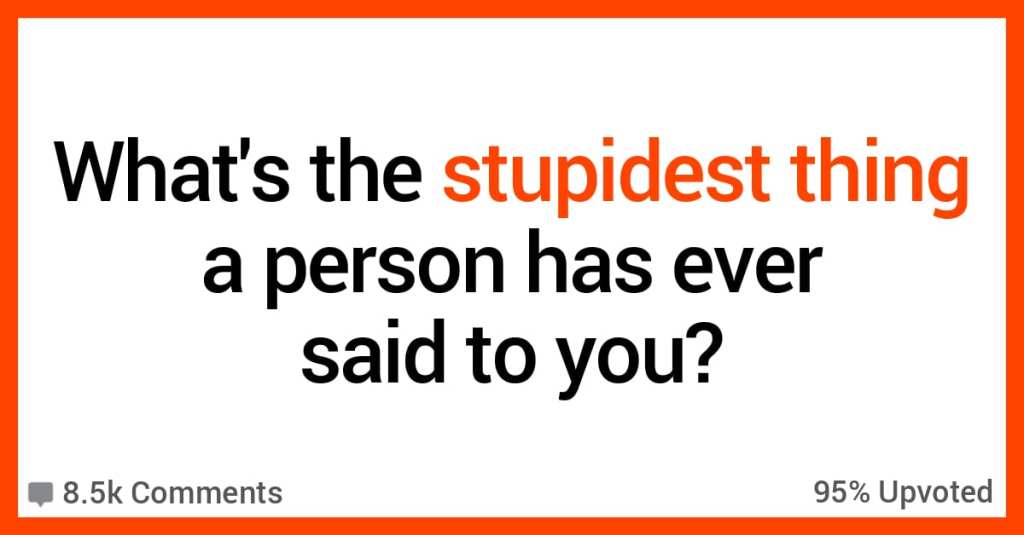 I remember one of my good friends told me a story once about his ex-girlfriend.

They were playing a game and the question was, “If you could time travel to any point in history, where and when would you pick?”

Her answer: the moon.

Now that’s pretty dumb! Are ready for some more of that action?!?!

“I had fellow tennis player tell me I couldn’t win any matches because I was a girl.

He said the same thing to many other middle school female players. I may or may not have hit a well-aimed ball directly at his face (it hit).”

“I’m bi too! But i would never date a girl… and I’ve never had a crush on one… I just think that girls are pretty! So I’m part of the lgbgt i guess!”

“I talked to her a little bit longer and she realized she was straight.”

“My sister said the pandemic would be over “in like two months”.

Spoilers: she was wrong.”

“The Dumbest Thing Anyone Said To Me Was, ”Would you rather be strong, or lesbian?” I was like, WTF?”

“A girl in my class thought that William Shakespeare was on the dollar bill.”

One day, I was playing in tournament the guy I was paired to play was acting really cocky and said to his coach, “Oh, this game will be easy. It’s a girl. How good can she be?”.

I heard him say that and proceeded to mop the floor with him and beat him in 50 moves. Just because someone is a girl doesn’t mean they can’t play a game that is normally dominated by men.”

“In school last year some girl in my class who I barely talk to asked me if Mexico was pronounced M-E-X-I-C-O or M-E-C-K-S-I-C-O.

I sighed and said those sound exactly the same and then she told the teacher that I said something along the lines of ARE YOU STUPID OR SOMETHING? IDIOT THOSE ARE THE SAME.

Then I got detention.”

A female student raises her hand to tell me that pregnant woman have to be careful p*oping so the baby doesn’t fall out.

I should have won an Academy Award for not showing a shocked reaction.”

“Shopping for stocking stuffers at the local thrift store in the 1970s.

Huge bins of belt buckles with guys names for 99 cents. Dug through and found DAN, kept digging and digging. Guy came over to help.

“A blonde couple I know were having a conversation about the 2 letter state abbreviations on a road trip.

“Nebraska is NE…Colorado is CO…Denver is DE…” and never skipped a beat.”

“I absolutely LOVE my mother. She is the kindest most loving generous beautiful person in the world. But she does come out with some of the daftest things sometimes.

We were watching on old movie and she said of the main actress “Oh, this must one of the films she was in before she died”. You know as opposed to the ones she was in after she died?!

Or the time she got a good on a kettle but still paid €40.00 for it said “well it was cheaper than the more expensive ones.””

“Someone asked me why Mormons sacrifice kids and I seriously died, it was so hard not exploding into laughter.”

“When I was in 7th grade math (around winter so we had a lot of snow days). Our teacher would have videos on the school’s website for us to watch.

The teacher had asked us to watch the surface area video and to not click on the scientific notation one because it was for 8th grades. The Karen of the class Danica ASKED the teacher in her classic white girl voice, “I thought you were the math teacher not the science teacher??”

I looked at her and thought to myself, “Our generation is doomed.””

Now we wanna hear from you.

In the comments, tell us about the dumbest thing that anyone has ever said to you. Thanks!