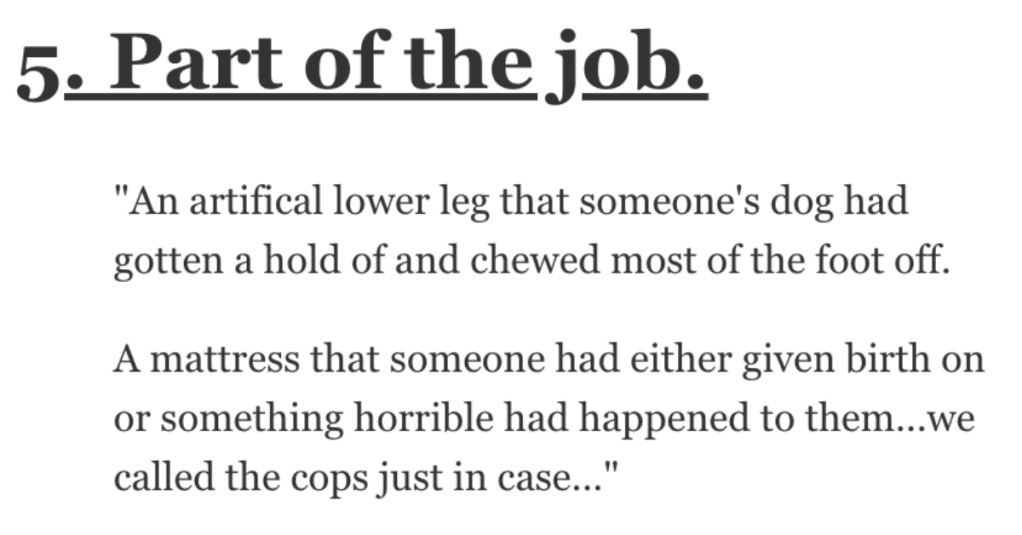 I know I’ve dumped my fair share of bizarre things that I’ve collected over the years on unsuspecting Goodwill workers.

So you know that the folks who work at these businesses really get to see the oddest of the odd.

“I worked for a Goodwill program that hired developmentally disabled adults. My job was to assist the clients as they processed donations.

We found things like a bowl and bag of weed in a coat pocket, a shirt that said “I’m not an alcoholic I just go to AA to get chicks” (somehow that one sustained a tear and had to be trashed), and, worst of all, a garbage bag full of dead rats.”

2. All kinds of crazy stuff.

“We got a suit of leather armour. Pretty awesome.

A whole roadkill deer. Keep it classy throw your roadkill in the donation boxes.

A soviet general cap full with badges. A week later. The same cap but with all the badges cut and picked off. Were probably worth more than the cap.

A coat with about 5,000 dollars stuffed in all the pockets.

Half a bottle of gin, tucked away in a box of books in such a way that if you knew it was there you could get it easily but if you didn’t know it was there it would just look like a box of old books.

A stack of Saxon algebra text books, along with To Train Up a Child, and Dare to Discipline.

A bunch of books about dealing with divorce, mixed with essential oil MLM materials.

A board book about trains, a few Goosebumps titles, and The Communist Manifesto. That one wasn’t sad, it was just weird.

A rolling suitcase full of Consumer Reports magazines. That one was just demoralizing. I work in a small independent store and we don’t have mixed paper recycling, so I had to throw them all in the regular trash when the donor could have recycled them.”

There were three DVDs of the stuff that I had to quickly throw away so the lovely old lady I volunteer with didn’t see them.”

“An artifical lower leg that someone’s dog had gotten a hold of and chewed most of the foot off.

“The most unique thing that sticks with me is an odd incoming trickle of rawhide art.

Somebody out there was buying those rawhide sticks for dogs, soaking them and reworking them into the shapes of animals, and passing them on to the goodwill.

Had no idea that was a thing people did.”

“We regularly encountered biohazards of various kinds stored inside bags of clothes which was irritating.

Donations of funeral urns were pretty regular and kinda weird.”

“An envelope filled with unknown white powder scared the heck out of me but no one took my concern seriously, and I never got sick so that’s that.

And of course the obligatory bags of dirty socks and underwear, knives in random places, loads of dildoes, a few guns and bullets, and enough syringes to fill a small doctor’s office. The strangest was a syringe stuck into a fake houseplant.”

“A duffle bag full of bones. Large one. We had to call the police, who brought the bones to a coroner to determine if they were human.

They ended up not being human, but still… why? Why do you have a duffle bag full of bones to begin with, and why the hell do you think your local thrift store wants them?”

On one occasion, someone donated a plastic cup that was still about halfway filled with iced tea.

Someone donated a live fawn.

And, finally. The worst.

Someone donated their child.

These f*cking m*th heads were pissed off because their kid was crying because he was hungry or something and they whipped around and donated their child to our thrift store. He didn’t have shoes or socks and was just in a dirty pair of pajama pants and a tshirt. The kid was so young he didn’t know his parents’ first names. It took ages for the police to figure out who they were and arrest them.

In the time he was with us we bought him pizza, gave him tons of candy, got him new clothes/shoes from our store, and gave him all the toys he could want. I believe that sweet child is now in the custody of a more functional family.”

“A man came in with his jellyfish collection. 27 jellyfish in different sizes.

Yes, they were in glasses and with what we guess to be formaldehyde.”

I worked in the e-commerce department for a huge district of Goodwill’s and that sh*t was wild— we had a room dedicated to items deemed “inappropriate” or illegal to resell that had a wall floor-to-ceiling stacked with copies of Mein Kampf which was more a spectacle than anything.

Before my time working there a human skull fragment was found- and obviously was handed over to authorities, we were all briefed on what to do if that situation arose again.”

“Every once in a while at the shop I used to volunteer at, a large white bag would appear. Always the same kind of white bag, it was full of hand knitted baby cardigans, hats, gloves, bootees.

All different shades, expertly made, beautifully folded, with tissue paper on top and the whole thing smelled of fresh baby powder. Nobody ever saw who brought it in. We’d be through the back sorting stuff, head through when we heard the front door go and one white bag would be there, with nobody in sight.

I’ve not worked there for years but it still happens, from what I’m told. To this day nobody knows who the Mystery Knitter is.”

“About 10 years ago I worked at a chain thrift store, one morning we got a phone call from this gentleman saying, rather calmly, “I think I accidentally donated my mom”, naturally I had no clue what the f*ck that meant. Turns out the guy donated his moms ashes so he left his number in case we found it.

The whole back room went on a hunt because it had turned into this competition on who would find his mom first. We found her, phoned him and he came and picked her up. We thought that was the last of him, until we were processing some donations a few months later and found his mom again.

We phoned him because we still had his contact information, his only reply was “god d*mn it”, he came and got her and we never heard from him after that.”

Have you ever come across any interesting stuff at thrift stores?

If so, please talk to us in the comments.