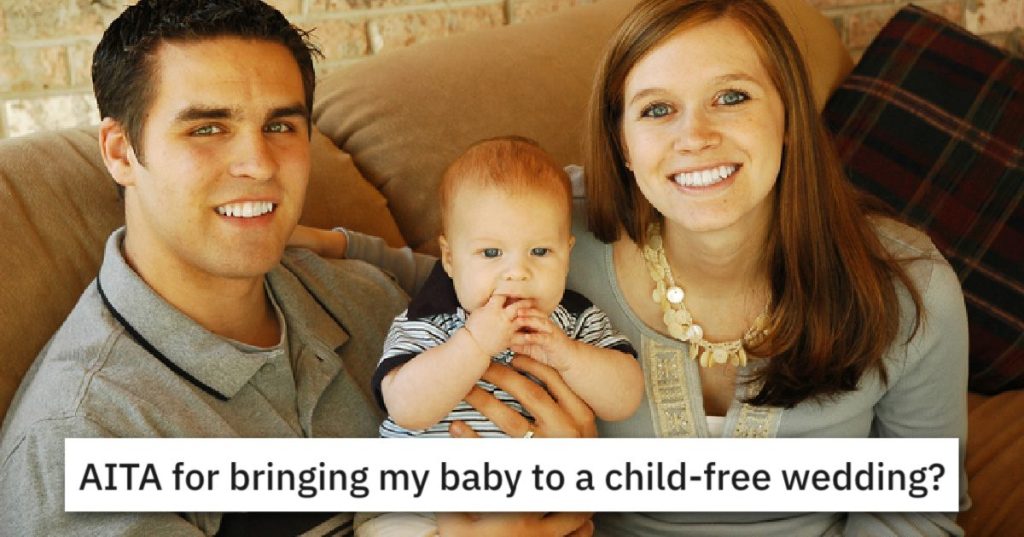 Person Asks If It’s Ever OK To Bring A Baby To A Child-Free Wedding?

More and more people are requesting that their weddings be childfree. And while it might be inconvenient for those of us with kids and no babysitter nearby, the truth is that it’s their day, it’s their party, and most people respect the wishes of the bride and groom.

Apparently not everyone responds that way, though because OP thought it would be ok to bring her baby since she didn’t feel comfortable with the sitter and she would hold him on her lap the whole time.

My cousin lives a 6 hour drive from me and the rest of our family. A few months ago we all drove over there for his wedding.

Due to limited space, no children were invited to the wedding except the bride’s young nieces and nephews.

The bride and groom and other family members had arranged for a sitter at/near the venue but OP wasn’t comfortable.

When RSVPing she wrote that she would bring her baby but he would sit on her lap and not eat anything (?). When she heard nothing back she assumed that meant it would be fine.

My baby was 10 months old at the time and I wasn’t comfortable leaving him alone in an unfamiliar place with a stranger, which was a babysitter that my other cousins hired for their own kids. So I decided to bring him to the wedding.

I wrote on the RSVP that I was bringing him but he would be sitting on my lap and I would bring my own food for him. My cousin didn’t say anything so I assumed that he was OK with it.

The baby cried at the ceremony but she took him out right away, and she wore him during the ceremony.

My baby cried at the ceremony but I quickly took him out of the room. At the reception I had him with me the whole time in a body carrier.

He didn’t make much of a fuss and I thought everything was OK.

She didn’t realize anything was wrong until afterward, when her aunt and uncle (the hosts) were upset with her for breaking the rules.

Other family members who did leave their kids with a sitter were also annoyed, thinking OP got special treatment.

After the wedding my aunt (groom’s mom) confronted me and told me that I was rude for bringing my baby without permission. I explained that I wrote on the RSVP what I was planning to do but my cousin didn’t object. She said that my cousin and his bride had a problem with it but the bride didn’t want to start any drama because she doesn’t know me well.

My other cousin’s baby was 7 months old at the time and my aunt said that he had no problem leaving his baby with the “certified” babysitter and I should of done the same.

And some of my cousins were upset because they thought that the groom gave me special treatment by letting me bring my baby and making them leave their kids with a babysitter. I didn’t mean to start any drama. AITA?

Is it “no harm, no foul” because she “didn’t mean to start drama?”

I’m betting that they have some serious opinions here!

The top comment – along with many others – said that OP acted as if she was above the rules, and that’s never cool. 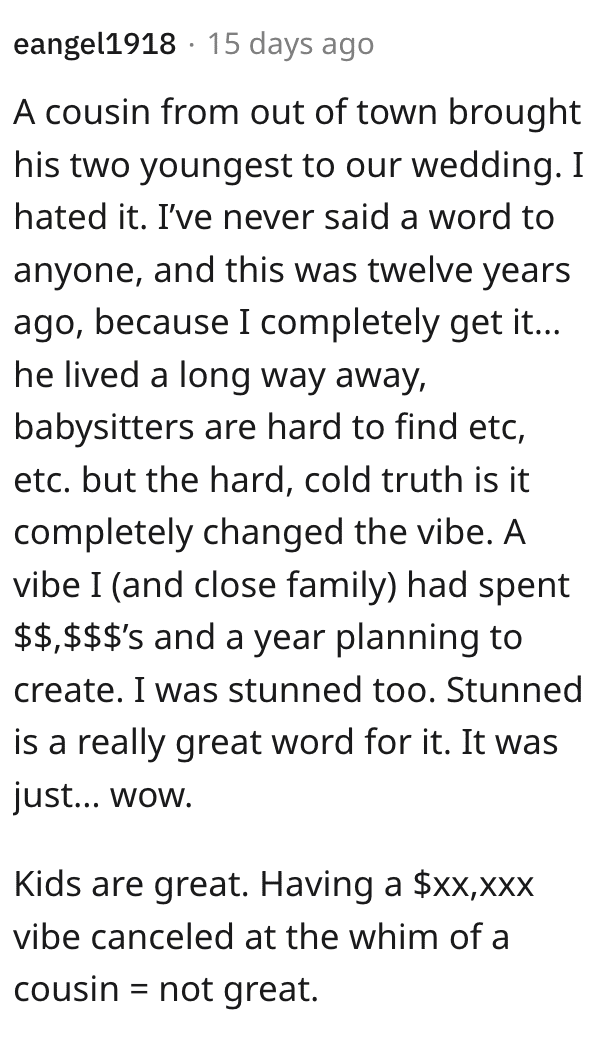 And making the day not-so-enjoyable for everyone else is incredible selfish. 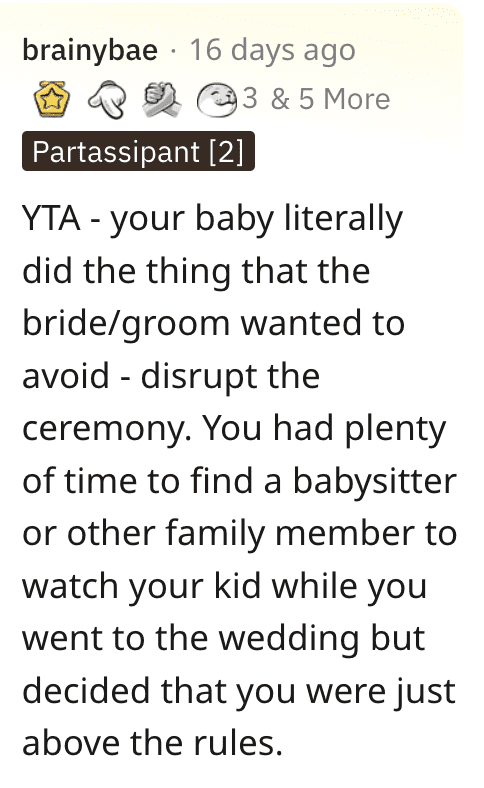 A phone call would have been better than writing it in the RSVP, too. If she must. 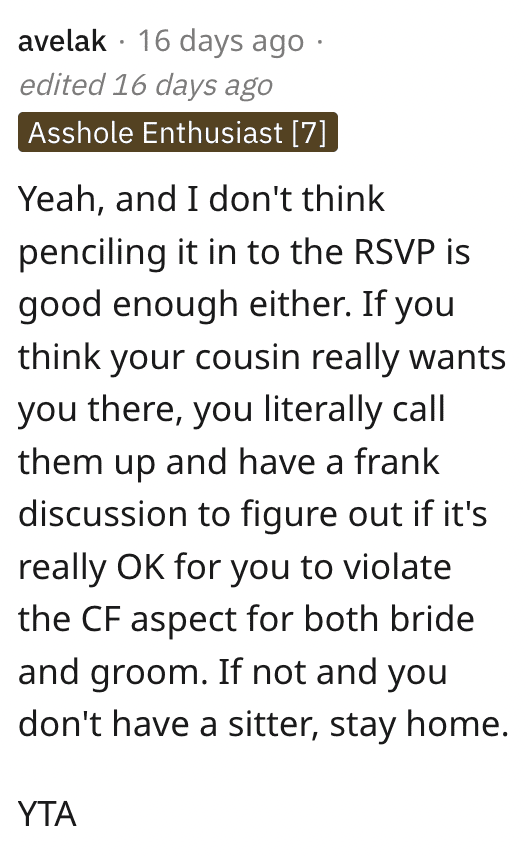 Entitled and passive aggressive are the words of the day. 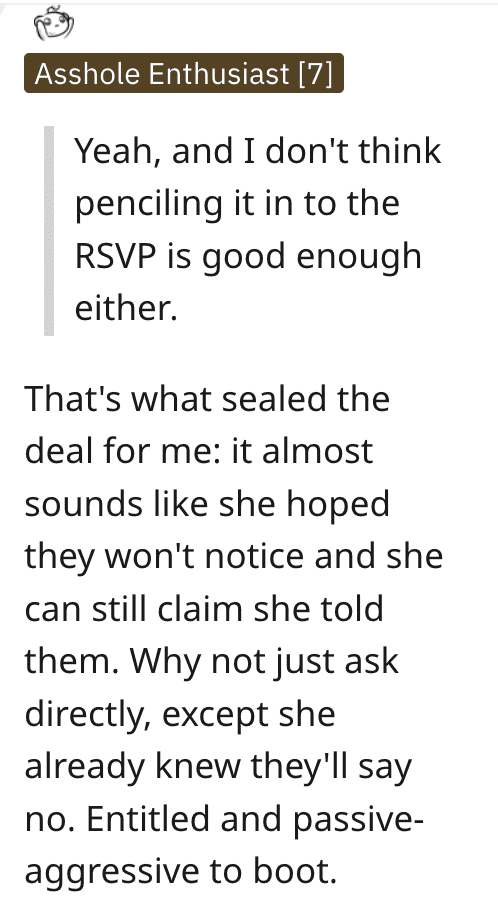 Following the rules in the first place is probably your best bet. 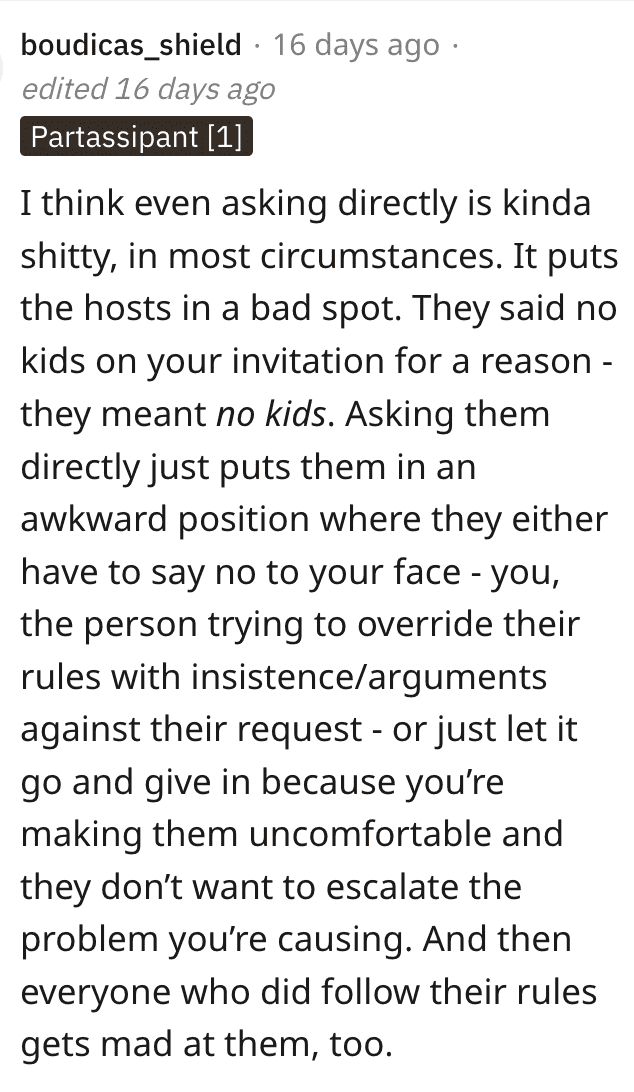 Just don’t do this, y’all. If you have a legit reason other than “I just don’t want to,” at least speak to the bride and groom first (and probably avoid the ceremony altogether, so that interruptions aren’t made).

How would you have handled this as the bride? Tell us in the comments!