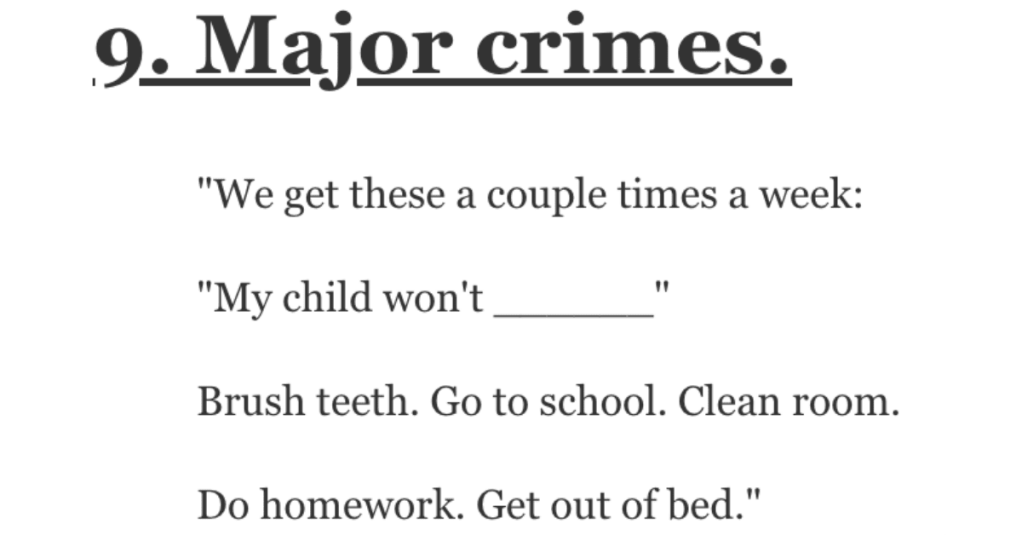 Police Officers Talk About the Dumbest Reason They’ve Been Called

Day in and day out they deal with all kinds of dangerous situations and criminals. BUT, they also occasionally get called out to scenes for totally DUMB reasons that are pretty hilarious.

And who doesn’t want to hear about those kinds of stories? I know I do!

Let’s take a look at these funny stories from AskReddit users.

“Reporting party said a pigeon was acting strangely on her deck. It wouldn’t fly away.

It flew away when I clapped my hands.

“Lady called because a cat was in her yard. Not attacking anybody or anything like that. It was just in her yard.

Even better is that we had to do a report every time we responded to a call, even if no citations were issued. So in my report, I put a cat as the suspect and a calico as it’s race.”

“Responded to the outside of the county jail one time (L.A. County Twin Towers) and had to actually fight a guy trying to climb the fence INTO the jail.

This may not sound like much until you realize we had to fight a guy in order to prevent him from entering the jail, then drive around the back and put him in jail.

“Once responded to a call originating in the Sheriff’s department parking lot. Literally walked out of the doors into the following clusterf*ck.

A woman who had just gotten released from jail’s ex girlfriend came to pick her up, drunk, on a moped. The reason it got reported is that the drunk woman was doing donuts in our parking lot waiting for her ex, lost control, and rammed a police car.

My training sergeant always had a saying that ran true that day, “We don’t catch the smart ones.””

“We have a guy in town who is paraplegic and confined to a wheelchair. He also has a totally abrasive personality and is an all around awful person. The county pays for a caretaker, but he either fires them or they quit because they won’t cater to his unreasonable demands.

He called 9-1-1 once because his trash cans didn’t get moved to the curb before trash day and he wanted the police to come do it for him. The dispatcher routed me the call.

I called in to dispatch and told them that I was absolutely not going out to put this guy’s trash cans out. They ended up sending the fire department out after enough cops mutinied and refused to go.”

6. This needs to be tested.

“A woman found a half eaten sandwich in her unfenced back yard. She thinks someone threw it there to poison her dog.

She saved the sandwich and wanted us to test it for poison.”

“One woman called because someone “stole” her American flag from her front yard. One of those little tiny yard flags that are about 1 foot tall and plant in your grass.

She called the morning after a particularly bad and windy thunderstorm. I had to explain to her that it’s much more likely that the flag blew away then someone maliciously stole a 50 cent flag.

I then found in a nearby sewer drain.”

“Had an elderly frequent-caller report trespassing.

I show up and don’t see anyone around but her. She said mosquitoes were landing on the neighbor’s dog droppings.

She distressingly explained how the mosquitoes would then fly over the fence onto her property.”

“We get these a couple times a week:

Brush teeth. Go to school. Clean room. Do homework. Get out of bed.

“Old woman couldn’t back out of her driveway, asked for an officer to help spot her.

Old mans alarm clock went off and couldn’t figure out how to turn it off. And was physically unable to bend down to unplug it.

Old woman literally just asked for an officer to come over. Turns out she just wanted someone to talk to.”

“I went to a house for suspicious footprints in the snow.

The footprints led to the oil tank, so I checked the mailbox with the homeowners and found an oil delivery receipt.”

“At the apartment tower I worked security for, some Saudi Royal family members called the cops because the hooker they hired took the money and ran.

Cops said, sure you can have the money back, but you have to admit to misdemeanor solicitation to do so.

Before people ask, their cars had KSA (Kingdom of Saudi Arabia) license plates and the Saudi Royal Family crest on it. Also, they admitted to what they did to the cops, so in order for the cops to take the theft report, they would have to include the solicitation report.

Cops gave them a break by letting them all go.”

“I was dispatched to a house reference a reported vandalism to a vehicle. When I got there, the guy who called was standing by his car.

I saw that there was no visible damage to the vehicle. His complaint was that dust picked by the wind was coming from his neighbors yard and landing on his car. The guy actually wanted to file a criminal complaint!

My first thought was maybe I was dreaming this nonsense. All I could do in response was stare at him and I said absolutely nothing. The guy became uncomfortable and explained his complaint again. I couldn’t help but just stare at him. At the time, I didn’t think I could say anything to him that didn’t sound insulting.

I think he finally got it since he just went inside his house and never called us again.”

If you’ve ever worked in law enforcement, what was the absolute dumbest reason you got called to a scene?