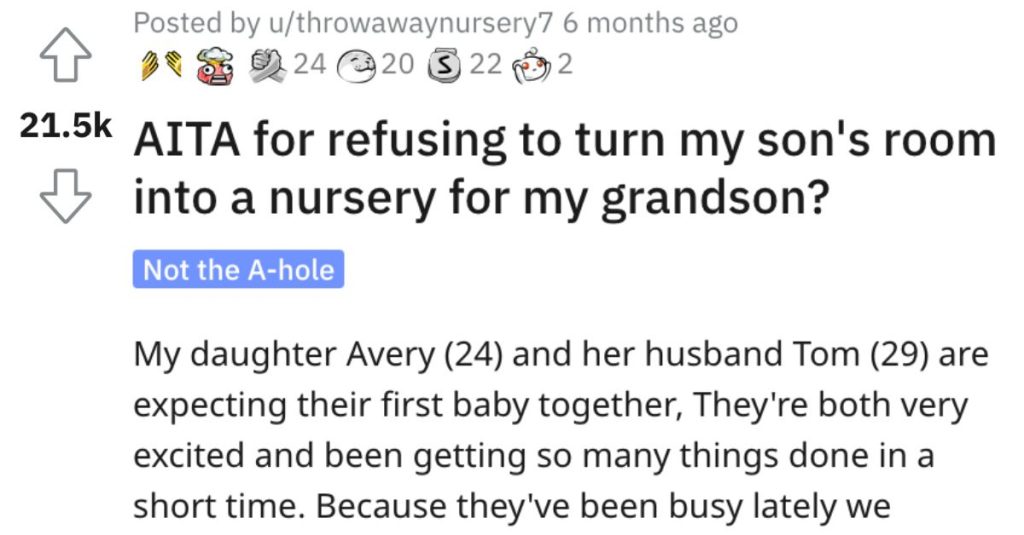 She Doesn’t Want to Turn a Room Into a Space for Her Grandson. Is She Wrong?

Things can get testy when it comes to grandparents, their kids, and their grandkids…and we got a good one here!

Take a look at this story and let us know what you think in the comments.

AITA for refusing to turn my son’s room into a nursery for my grandson?

“My daughter Avery (24) and her husband Tom (29) are expecting their first baby together, They’re both very excited and been getting so many things done in a short time. Because they’ve been busy lately we haven’t seen them in 2 months.

Yesterday they visited me at the house to talk about the baby mostly. Tom asked me if I had emptied one of the rooms so I could turn it into a nursery yet, I was confused by his question and asked him why. He said that he expected me to, I asked why again, he looked at me and said that every decent grandmother prepares a nursery at her home specifically to welcome her grandson as a new member of the extended family.

Then went on to give examples of how common this tradition is. I don’t know why but his words irked me. I asked why can’t his mom prepare one for her grandson since this is her grandson too, He laughed and said that his mom already has one prepared that she paid for herself.

I have to mention Tom’s family is well off unlike us, we don’t have an available room or money to afford a whole nursery, yet, Tom insisted it’s necessary and that I make efforts to make sure my grandson gets everything he needs whenever they visit. I looked at my daughter wondering if she agreed with this and by the looks of it, she did.

I told Tom that I don’t have the space or money to make this happen but he argued that not making this happen will affect how many visits I get compared to his mom who’s fully prepared and “considerate” of her grandbaby’s needs. Avery finally spoke up but told me to please try to move my 16 yo son to stay with his 14 yo brother.

I said no the boys are old enough to get their own room but Tom pitched in saying boys can share a room since they’re boys but I wasn’t convinced. In fact, I was upset they came up with this suggestion. Avery didn’t like that and took it as in I don’t care about her baby and don’t want to do anything for him but that is just not true. The conversation turned into an argument and they left minutes later.

Avery must’ve called my husband because he yelled at me when he came home saying this was no way to treat my daughter and our grandchild, I told him the story and he accused me of favoring the boys over Avery like I always do but this time I just don’t think her request is in any way reasonable.

This reader was blown away by this story and said this was not normal or acceptable behavior. 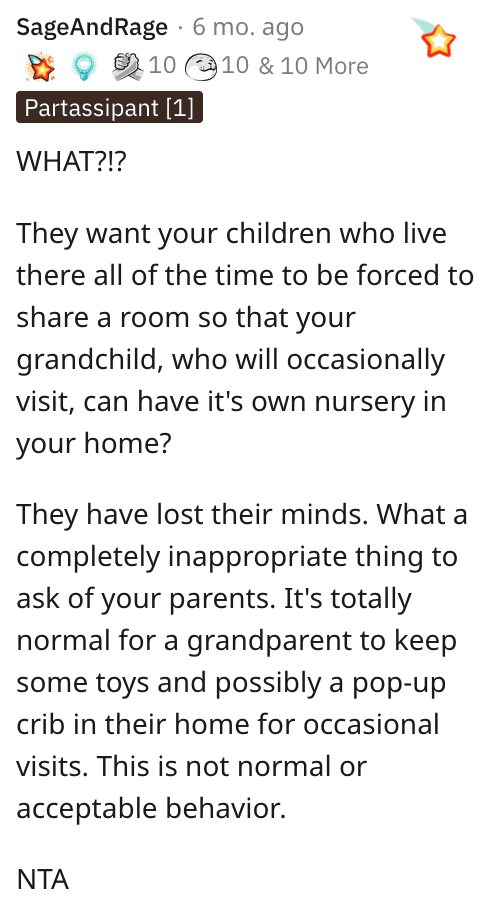 Another reader said they just don’t get it and they’d be offended. 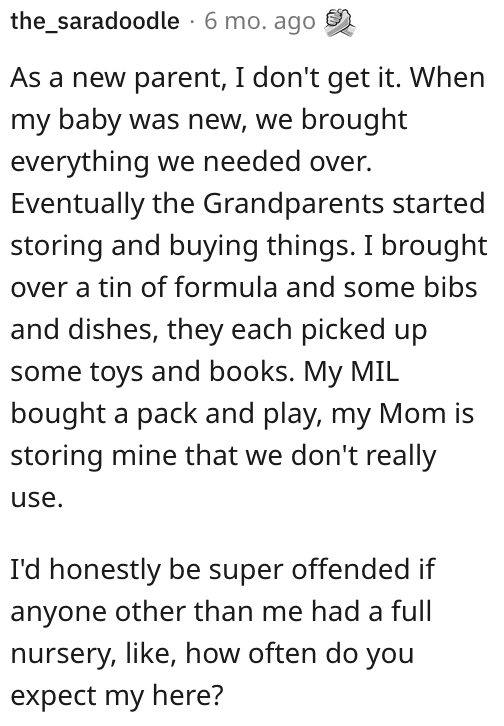 And this Reddit thinks this situation is weird and said this woman is NTA. 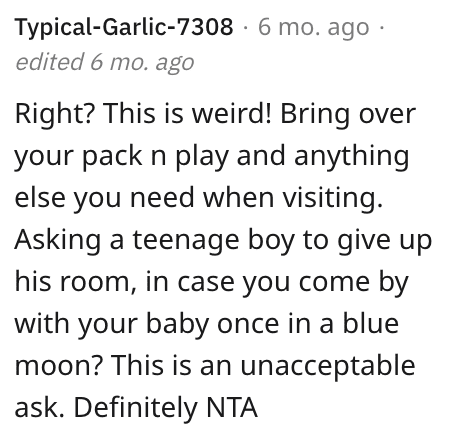