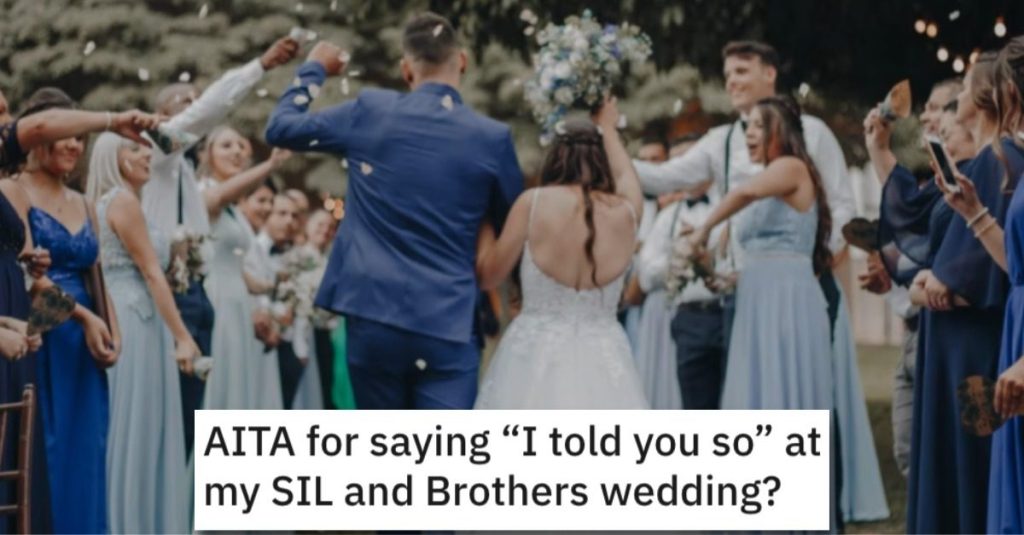 She Said “I Told You So” at Her Brother’s Wedding. Is She a Jerk?

Nobody ever wants to hear anyone say “I told you so…”.

It’s snarky, rude, and can be really hurtful.

But is it warranted sometimes?

Check out the story below and see if you think this woman was totally out of line for saying that dreaded phrase at her brother’s wedding.

AITA for saying “I told you so” at my SIL and Brother’s wedding?

“I (27F) have known for SIL for three years. She’s the type of person that always needs to be right and needs to be in charge of everything. She’s very demanding as well.

My SIL’s family members are very disrespectful and rude. They don’t clean up after themselves, expect everyone to act like maids or servants around them and they think very highly of themselves. They can never be wrong and think they can do no wrong.

Because of this my SIL’s family don’t really punish their kids. Like they have no consequences. They aren’t even like the gentle parenting type either.

My SIL’s sister has a son and he’s extremely chaotic. He throws tantrums if he doesn’t get something and he has to be center of attention 24/7. When they’re are birthdays he needs a gift or opens the gifts and needs to blow out candles. It’s frustrating which is why I’m not usually around at family gatherings and other stuff.

I was my SIL since her friend cancelled on her and I was helping make invitations. I saw one of the names were SIL’s nephew. I asked if she wanted him to go and she said yeah. She then asked why. So I told her why.

I talked about his tantrums and how he’ll probably throw a fit during the reception and other stuff. She got mad and said that she didn’t know what i was talking about. She told my family and her sister which caused her sister to write me a message saying how I was wrong and other stuff like that.

Well day of the wedding comes. Everyone comes in happy except Nephew. He’s crying and is about to throw a fit. When my SIL came out he literally started screaming. The poor Pastor had to stop and wait for the parents to leave.

During the after party he was back and again crying. When they were cutting the cake he screamed extremely loud he pushed my SIL who was holding a glass of wine and spilled on her. She started crying. She turned around to leave and I looked at her and said “I told you so” she started crying even more now.

When i got home my mom called me extremely immature and wants me to apologize. So, AITA?”

This person said she’s an a**hole…and they made a reference to The Big Lebowski for good measure. 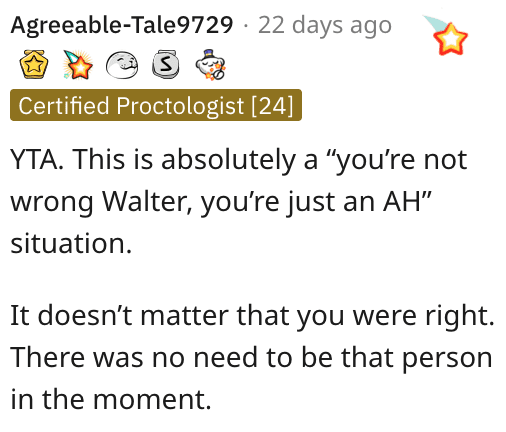 And this individual agreed and asked what she was hoping to accomplish by saying this. 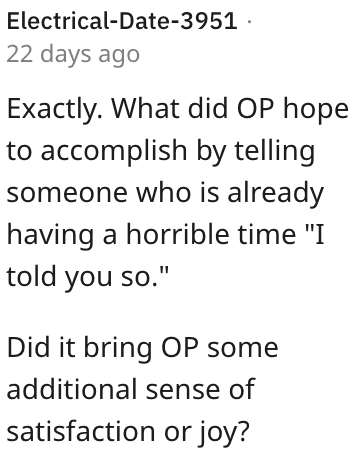 Another reader disagreed and said what she said was justified here. 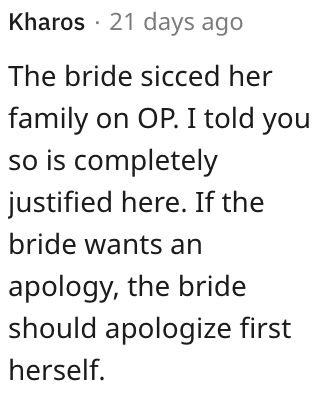