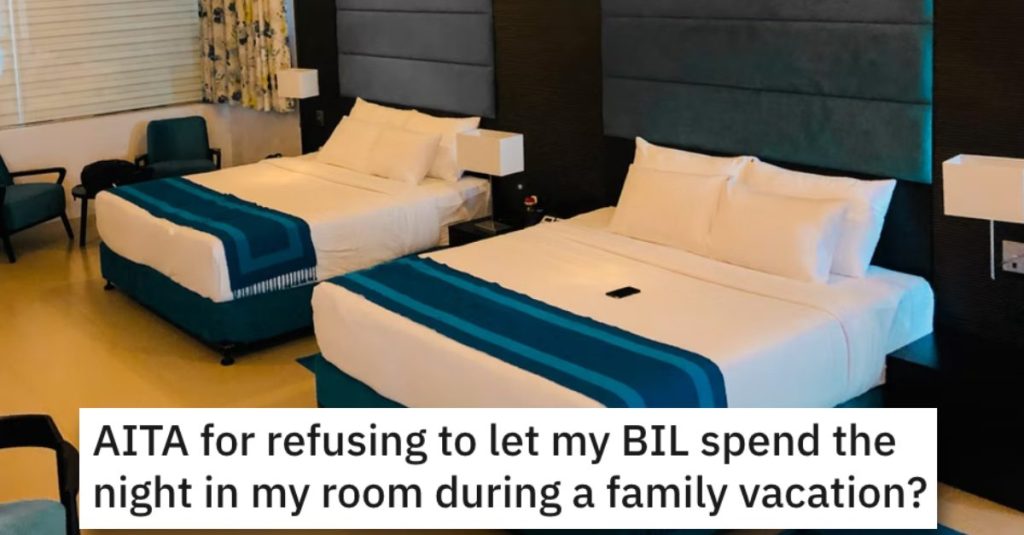 She Won’t Let Her Brother-In-Law Spend the Night in Her Room on Vacation. Is She Wrong?

The older I get, the more I’m turning into a big baby as far as it comes to my sleeping situation.

I used to be able to sleep anywhere if I was traveling: under tables, on floors, outside, inside, etc. It didn’t matter!

Now I need the room temperature just right, the correct amount of pillows, and a fan blowing cool air on me AND making noise…

But on to today’s story…

This woman wants to know if she’s an a**hole for not letting her brother-in-law share a room with her on a family vacation…yeah, that sounds kind of weird.

AITA for refusing to let my BIL spend the night in my room during a family vacation?

My parente booked 2 rooms and I got one for myself (meaning that I paid for it, they didn’t force me but I still paid).

Anyways, I noticed that my sister and BIL were acting strange before we got to the resort. At the hotel an argument ensued between them and my sister ended up kicking him out of the hotel room and stayed there with the kids. BIL then knocked on my door at 1am asking if he could stay with me for the night because “my crazy sister” unfairly yelled at him and kicked him out.

I tried to pressure him to tell me but he stalled. I said I didn’t feel comfortable having him sleep in my room but he snapped and told me that he was like a brother to me and I was being paranoid. I suggested I go talk to my sister and try to get her to let him into the room since he paid for it but he said no and that she was the one who told him to stay with me.

I suggested that I have mom come stay with me and he stay with dad but he refused. I declined and said I couldn’t let him spend the night in my room period. He got mad at me and went like boarderline hysteric til the point where the staff got involved. My sister then came out the room and started arguing with him again which resulted in him sleeping outside.

My parents thought I should’ve let him stay with me but my sister said it would’ve been inappropriate and denied telling him to knock on my door and ask to stay with me.

He has stopped talking to me after that and my parents insisted that I should’ve let him stay and not let him sleep outside. They said I created unnecesary tension and added more stress to the vacation by acting selfish.”

This reader said she’s NTA and that she paid for that room. 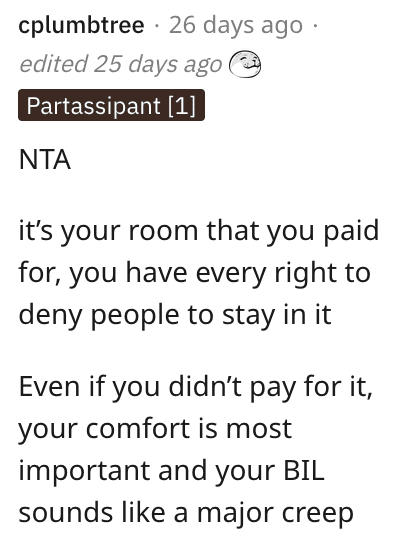 Another individual said it sounds like the BIL was actually trying to sleep with her…ewwww! 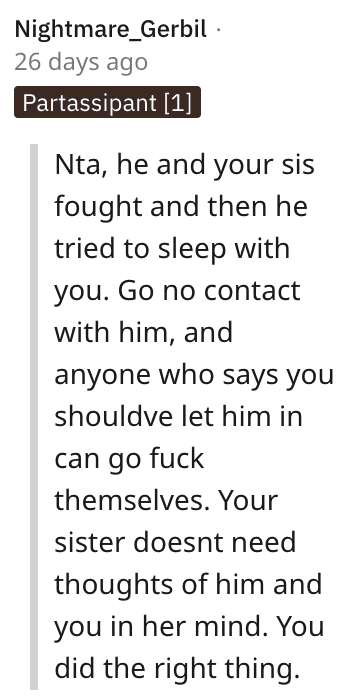