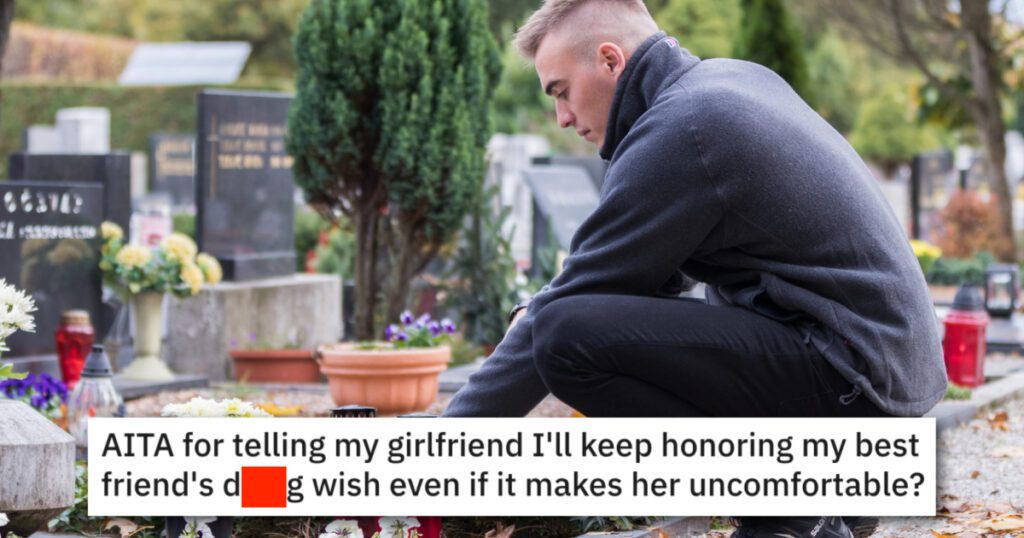 Should A Longstanding Promise To An Old Friend Come Before A Current Relationship?

It’s strange how even though our childhood takes up a comparatively small percentage of our lives (hopefully), the people and moments who exist in it have so much lasting influence.

OP had a best friend of the opposite sex growing up – just a friend, neighbor, and confidant. They made a joke as young teenagers where they “got married” by exchanging a ring and a scrunchie, and a few days afterward, she was in a car accident and sadly passed away.

My late best friend and I knew each other since we were little. We were next-door neighbors and always played together. We even went to the same kindergarten, primary school and middle/high school together.

One day during our sophomore year, we started talking about how most of our classmates had started dating. We obviously weren’t okay with that and decided get one up on all of them by getting married. As a joke I made her a fake ring and she gave me her scrunchie.

A few weeks later, a drunk driver hit her. She sustained multiple injuries and was in the ICU for 2 months, the doctor told her family that her survival chances are slim.

Before she did, OP promised her that every year on their “anniversary” he would visit and wear her scrunchie, and he always has.

When he met his now girlfriend, she said she had no problem with the tradition and thought it was sweet.

In the only time I talked to her before she died, she made me promise to always visit her on our “wedding anniversary” and to wear her scrunchie during the visit.

4 years ago when I started dating my girlfriend I told her about it and asked if she was okay with it. She commented about how sweet and nice the tradition was and told me she was perfectly fine with it.

Four years in, though, she thinks it’s time to let it go after ten years and seems angry with him for wanting to continue it.

Today was the 10th anniversary and I took the day off, before my girlfriend went to work she told me it’s time to put this tradition to rest and move on because it was starting to get pathetic that I still wear a dead girl scrunchie to celebrate a fake marriage that we had 10 years ago.

OP is confused, since she’s been fine with it until now, but wants to continue the promise he made to one of his best friends growing up.

I was furious at her comments because she wasn’t just a “dead girl”. She was my best friend and like a sister to me, we grew up and did everything together. I told my girlfriend a long time ago that we never had a sexual or romantic relationship and that our wedding was just a joke.

It’s not like I talk about her or keep her photos around the house or anything similar. The only times I’ve talked about her to my girlfriend is when I told her if she was okay with the tradition or if she asked me about her.

When I told her that I’ll keep honoring my best friend’s dying wish even if it made her uncomfortable, she left for work angry at me and hasn’t came back home yet.

Is he wrong? Is she? Let’s hear what Reddit thinks! 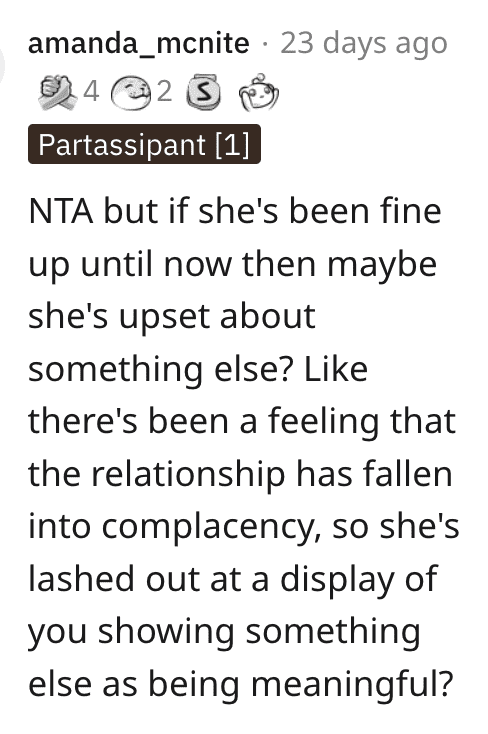 And the follow-up suspects that perhaps after 4 years, his alive girlfriend is wondering when he might be showing similar commitment to her – but of course, that doesn’t excuse her behavior. 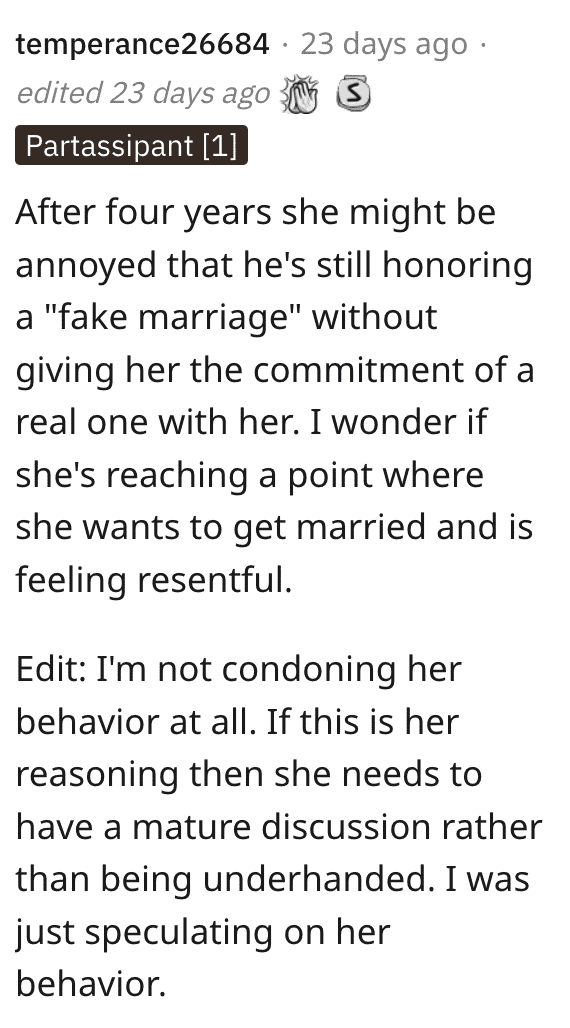 Some people want to give her a break, because after all, communication takes practice. 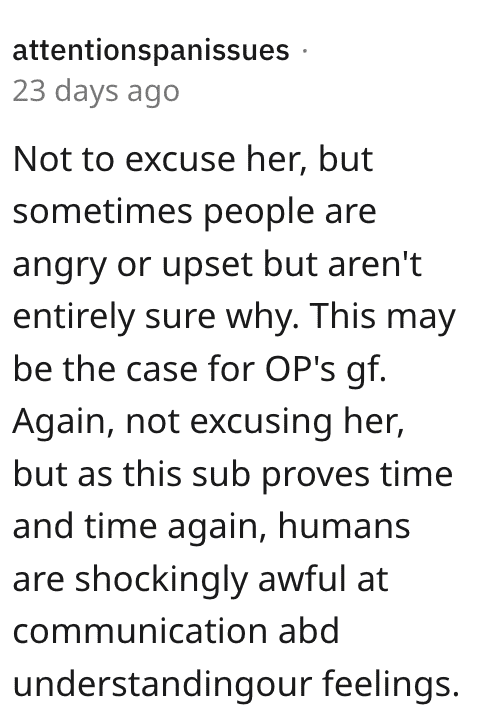 And of course we’re only privy to one side of the story.

Grief is different for everyone, but it’s probably not really about that. 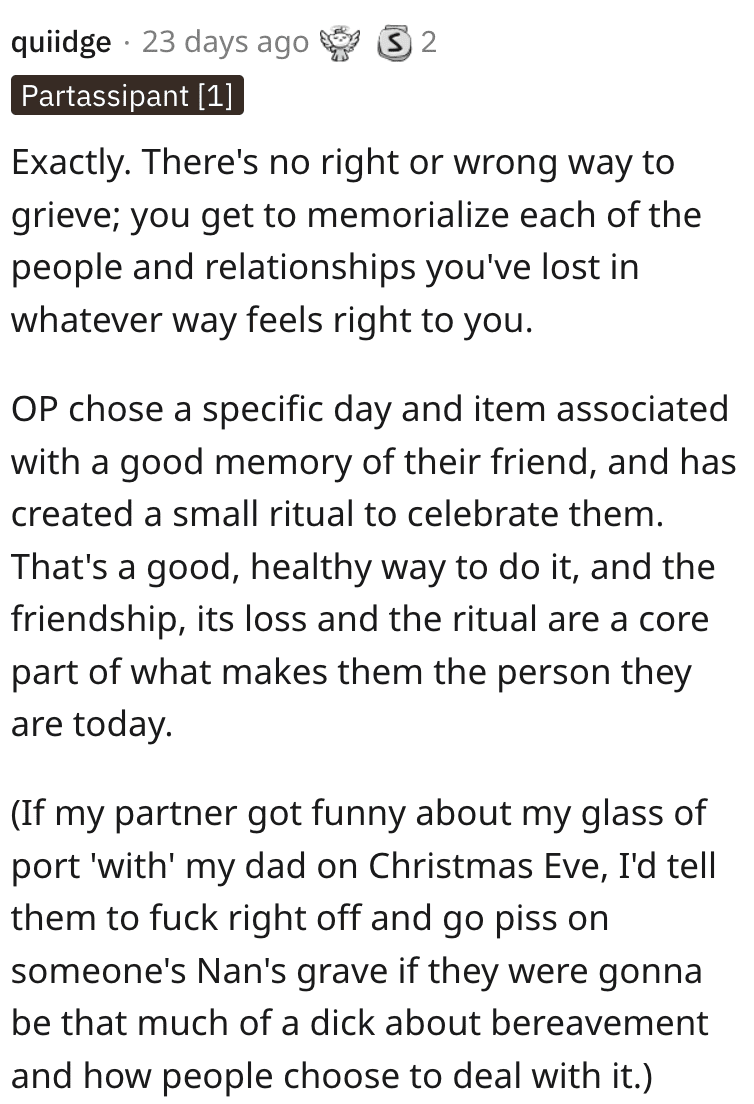 I feel so sad for the teen girl who died, probably scared she would be forgotten. Glad she had a friend who kept his promise never to do that.

I hope OP talks to his girlfriend and straightens things out soon!