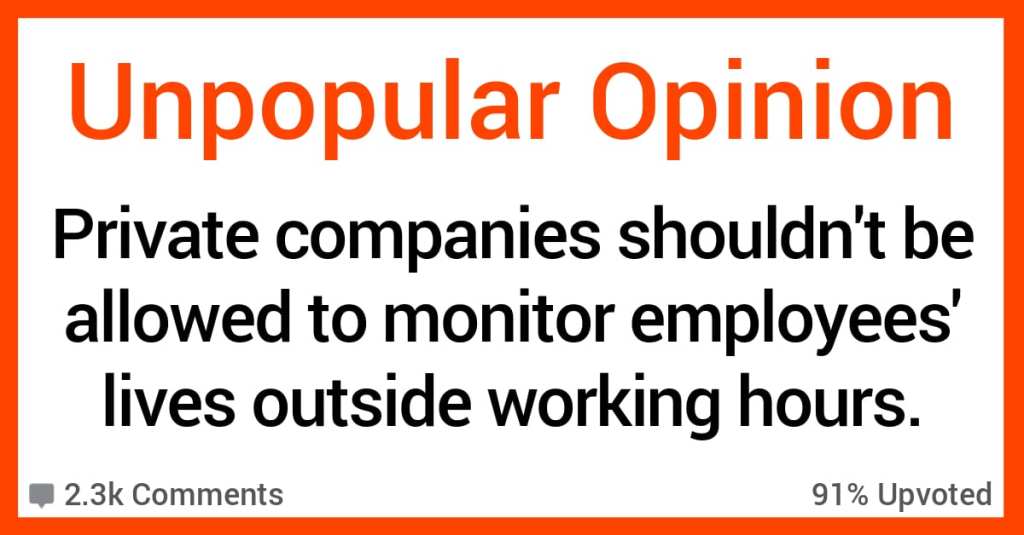 Should Companies Be Able to Monitor Employee Lives Outside of Work? Here’s What People Said.

Well, this is kind of a weird one and I have mixed emotions about it…

If we’re talking about monitoring the social media accounts of employees, I think that’s kind of fair game, even though I would never do it personally.

If you put something online, you can assume that everyone will see it…which is why it blows my mind when people share things about doing drugs or partying like a wild animal.

But, should companies be able to monitor the private lives of their employees?

Folks on AskReddit shared their thoughts about this.

1. No concern of theirs.

“It’s pretty self-explanatory. What you do/say outside of your working hours should be by law of no concern to the company you work for, unless you’ve commited something illegal.

No private company should be able to fire/punish you for something you said/posted on your social media accounts etc. provided it is legal, when you’re doing your job as stated in the contract.

Contracts which try to regulate the employee’s life outside of working hours, and when they are not wearing company logos/uniform (and therefore representing it) should be deemed fraudulent.

Firing a person for a statement they made legally while not at work should be penalized.”

“If I run a restaurant and I find out that my bartender holds public Nazi rallies, I am firing that bartender.

The fact that I abhor Nazis is reason enough. I also don’t want to become “that restaurant with the Nazi bartender.” Businesses depend on customers, so their reputation matters.

And in some cases, an employee’s behavior outside of work can have a negative impact on the reputation of a business.”

“I think if you’re off the clock, you no longer belong to that company.

Your life if your own.

If they want to have a fit about it, they aren’t worth working for.”

“If one of my employees is an outspoken white supremacist or Holocaust denier, I don’t want him working for me. I don’t think employers should be monitoring their employees social media platforms or off hours activities.

But if the employee is engaging in conduct that could bring embarrassment and potentially cost the company business while off the clock, and this behavior is brought to the attention of management, I think the employer would be foolish not to take action.”

“I agree. And f*ck off with your drug tests.

If I do my job well I’m obviously not on drugs. Only an idiot would post something negative specifically about their company online but unless a person is being openly creepy, racist or violent they should be able to post whatever they want.

Let’s be honest, most execs do a ton of blow anyway.”

“Most activities are NOT the company’s problem, but if you’re caught doing something morally reprehensible or illegal then it becomes their problem.

It shows what kind of employees they are willing to hire and let work there.”

“They can easily access your social media. If you said something that isn’t something they want representing their company, that’s a perfectly reasonable response.

It’s not illegal to protest mask wearing, but it’s pretty reasonable to fire someone for doing that.”

“If they have no connection to the company on social media then I agree.

But otherwise remarks about politics or other controversial things leads to damage of the businesses reputation, and therefore the business will want to cut ties with that person.”

“I have a feeling this is more aimed at a few high profile cases. Those have one big difference between them and most of us.

The vast majority of people aren’t going to be so publicly visible and visible as a representation of their employer as entertainers and celebrities. I can see the logic behind such things when it can stir up a sh*tstorm online and lead to boycotts and tarnished reputations. For those people their image is essentially part of their job.

That’s a very rare situation overall though. For the rest of us who aren’t visible we’ll known ambassadors of our employers I agree 100%. Nobody is going to associate any stupid stuff I was to do off the job with my employer at anywhere I’ve worked.

But plenty of things could still get me fired for things done well away from work even in private (drug tests being a big one).”

“As long as no one knows who you work for, and a link between you can’t be made, then I see no problem with this. In fact, ideally, you shouldn’t put who you work for on your social media.

The moment that you link your jobs name and location to your social media platform, it’s not really private anymore. At the very least it’s not private statements that you make that have no effect on anyone else.

If you’re willing to keep your job to yourself (besides specific individuals) and not as a publicly available data point, then I see no reason they should have any right to do anything about what you say. If, however, you make it publicly clear who you work for, then what you say does carry value in one direction or another, no matter how much you say it doesn’t.

I think that’s really where the disconnect is, though. Companies are saying you represent them even in your social media because it’s clearly available that you work for them. If no one knew you worked for them they’d have no argument, and I’d agree. If it’s clearly posted on your account, then I agree with them.”

“I’m in Australia and we recently had something related to this issue happen over here.

A rugby player said some pretty terrible things about homos*xuals on his social media account. I don’t remember the specifics, but there were some bible passages quoted. The NRL (National Rugby Leage) that employs him fired him because of this because he is a representative of that organisation and he has a pretty big public profile, therefore saying stuff like this goes against the clubs values of inclusiveness.

My point behind all this is that if you have a substantial public profile, and what you say carries then I think your employer can have some say on the matter.

Despite the fact that I don’t agree with the rugby players opinions I am fortunate enough to live in a free country so he is allowed to think what he wants. I just don’t see how spouting that stuff does anyone any favors.”

“You having the choice of who you work for is an illusion. You take what you can get. You do not retaliate, you have no ability to retaliate.

If you do attempt to retaliate, you will be punished, and there’s not a god d*mn thing you can do about it. Your employer owns you, and your life through your financial dependence. Your paycheck, your health insurance, even your future through your retirement accounts.

If you don’t like it, there’s nothing you can do about it, because you can’t leave. And there’s really not too much of a difference between what you have now and what else you think you’re going to get. Somebody else needs to get rich off of your overworked underpaid borderline enslavement, and it’s not going to happen without maximizing every little single bit of profiteering at ANY expense.

Your life, your human rights, your dignity, your soul, your mental wellbeing is not the responsibility of a private corporation remember? They can do whatever they want as long as they make money.

Do you think companies should be able to monitor their workers’ private lives?

Or do you think it’s an invasion of privacy?

Talk to us in the comments and share your thoughts. Thanks!