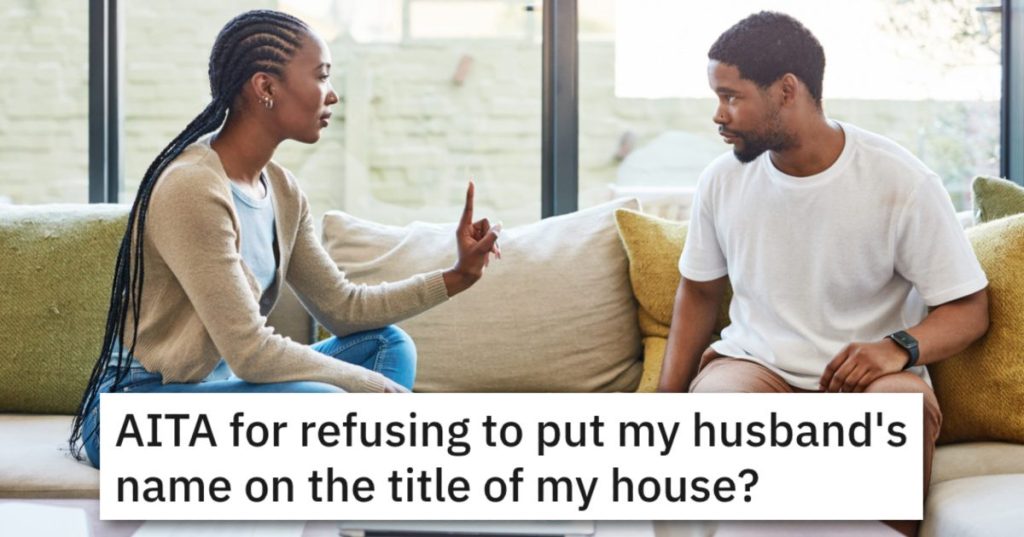 Should Every Marital Asset Be In Both People’s Names?

Marriage looks different now that it used to, and it can also look different depending on where you live in the world.

This OP says that in her culture, sharing accounts and assets isn’t a must-do – which works out fine, since as a couple, these two agree on everything except finances.

First some important info: I(30F) have been married to my husband(34M) for 8 years now. We live in a culture where you never combine your finances after marriage (some do, but they are the exception to the rule).

Also in the event of a divorce, there is nothing like common property or anything like that. You keep what you bought and anything that has your name on it.

OP prefers to save and stick close to home while her partner prefers to spend most, if not all, of his disposable income on travel.

We met while we were studying, graduated the same year, have the same (primary) income (I do some freelance work). We are so in tune in everything except how to spend money, and he likes travel while I am a homebody.

Because of this, when they married they decided to split their living expenses equally and then do what they pleased with their remaining income.

At one point OP broached the subject of saving for a house but her partner wasn’t interested.

Since the first day of marriage, I proposed that we share the expenses (rent, utilities, groceries, cleaning lady…) equally (even though culturally the man is responsible for all of them) then we should have a savings account to save for a house. He didn’t want to save for a house, he said that his money is better spent on experiences, and anyway there is nothing wrong with renting untill we are in our 50s, then we can buy a house.

In the end we agreed to have a shared account for expenses, then whatever is left is ours to do with what we want.

After 8 years of this agreement working out just fine, OP bought a small apartment outright with the intention of continuing to save for a larger house and eventually rent out the smaller space for income.

The issue? Her husband thinks she should put him on the deed for the apartment she saved for all these years.

He tends to take at least 2 weekend trips with his friends, staying in expensive hotels, going to concerts… Also even though I cook almost every meal at home, most times he would just order out for lunch or dinner.

I also go on weekend trips with my friends, but they are more day trips to the beach, hiking in the mountains, scuba diving… Each trip costs less than a tenth of what his trips do.

Well I have been saving for all of these 8 years, and now I am about to close on a small apartment, and pay it in full (no interest or monthly payments). The plan is to live there, save what I am used to saving plus what I used to spend on rent, buy a bigger house and rent this apartment for extra income.

And now he wants me to add his name to the deed.

She told him no, and he called her an a$$hole, and so they ended up on Reddit.

I flat out told him no, he didn’t want to save, he didn’t put a cent towards the house, so his name does not go on the deed. I also told him that I plan to buy a bigger house, and now that he doesn’t have to pay rent, he can save and put his share towards the next house, then he can have his name on the deed of the house.

Well he called me an AH, said that this is not what it meant to be married, and took some days off to go on a trip to “cool off”.

I don’t think I am an AH, but I also tend to be stubborn when it comes to what I perceive as financial irresponsibility. So AITA?

PS: I am not a miser, I still paid for dates, bought him gifts just because I see something he might like, went on one expensive trip a year with him (usually abroad)… etc. I just saved a lot too.

OP wants to know whether or not she’s being harsh or judgmental, and you know Reddit is going to be straight with her!

The top comment thinks her decision is simple (if not sweet). 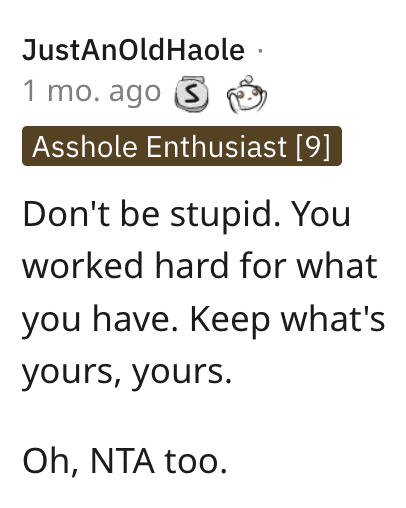 And this person thinks her husband needs to go back to the basics.

They say there’s nothing wrong with his behavior thus far, it’s just a lifestyle difference – but he doesn’t deserve to be on the deed. 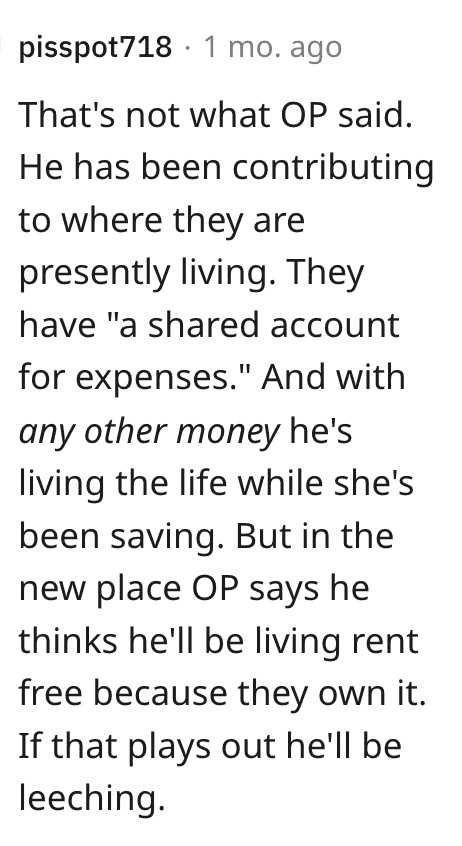 Although some people judged him a bit more harshly.

He might learn his lesson, though this commenter thinks he probably won’t. 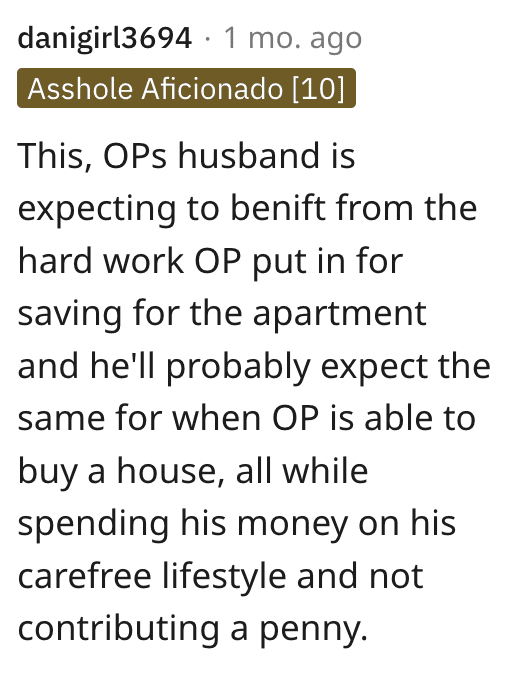 I don’t think this is as egregious as some, but it’s pretty galling still.

Would you have laughed at him and said no, or are you of the mind that married folks should share everything? Tell us which and why in the comments!