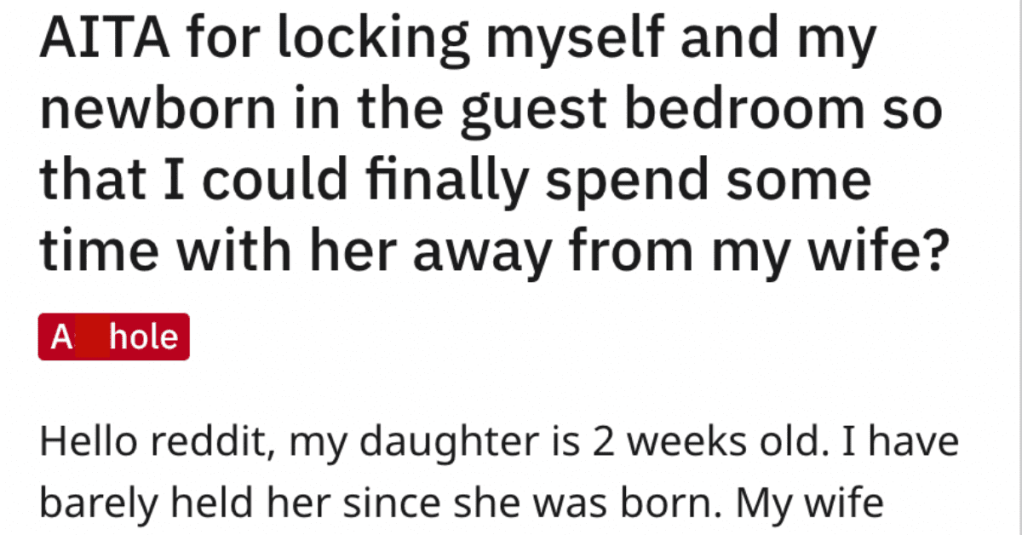 Should This New Dad Have Resorted To Locking Himself In A Room To Spend Time With His Newborn Daughter?

There are so many things about becoming parents that aren’t talked about enough – things that should be talked about, because if there’s anything you should prepare for as much as possible, it’s having a kid.

At the top of that list, though is postpartum depression and its cousins, postpartum anxiety and postpartum psychosis. Too many people think they know what it looks like, or that it won’t happen to them, or that it’s just the baby blues and it will pass, but the truth is that it’s dangerous, it can sneak up on you, and it can happen to anyone.

I have to think that this husband and father, if he was more educated, would have handled this situation differently.

He begins his story with the news that he and his wife became parents to a newborn girl just weeks prior to his post. OP has barely held the baby, as his wife as a hysterical breakdown whenever she’s forced to let the baby out of her arms.

Her reasoning is clearly irrational and she’s not even taking time to give herself basic care like food, sleep, and showers.

Hello reddit, my daughter is 2 weeks old. I have barely held her since she was born. My wife constantly has her. When I do get to hold her, my wife just starts crying hysterically until I give her back.

I asked her why and she said she was anxious that something would happen to our daughter and that’s why she felt the need to hold her so close.

No matter how much I tried to reassure her, she just wouldn’t let up. I practically begged her just to let me hold her so that my wife could shower, eat, and care for herself but nothing worked.

Instead of realizing that something is clearly and glaringly wrong, OP “did what he thought he had to do” and took the baby from his wife when she fell asleep holding her on the couch.

He went into a room with a locking door, flipped the lock, and refused to come out for hours despite his wife completely losing her mind on the other side of the door.

I felt like I was losing precious bonding time with my daughter so I did what I thought I had to do.

My wife fell asleep on the sofa with our child, I took her, went to the guest bedroom and locked the door.

My wife woke up shortly after, very upset of course that our daughter wasn’t with her. She soon realized I was in the guest room and begged me to open the door.

She was crying, kicking, and screaming. I didn’t open it though, and spent a good couple hours with our daughter in there.

His mother-in-law agrees that what he did was wrong and his wife isn’t speaking to him, so he’s thinking maybe he went about getting bonding time with his baby wrong – but he still doesn’t seem to realize what’s really going on here.

Apparently my wife had called her mom, because I got a call from my mil cussing me out, saying how I shouldn’t be taking a newborn from her postpartum mother and other things like that.

My wife has been furious with me and won’t speak and I’m just so frustrated because I really just wanted to spend quality time with my child but maybe that wasn’t the way to do it.

Reddit is going to educate him, though, and I hope their advice gets through his thick skull.

The top comment points out what those of us who have been there know – this woman is in trouble, and there could be serious consequences if OP doesn’t wake up and get her some help. (2) 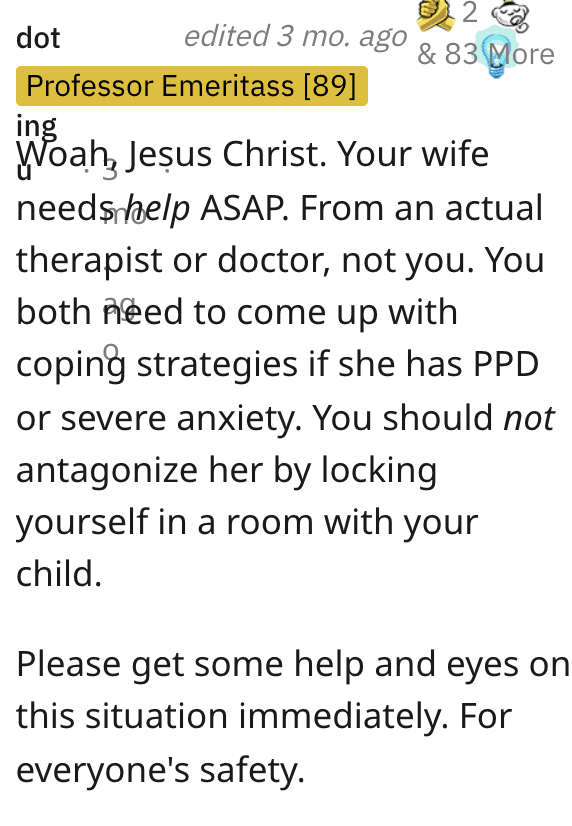 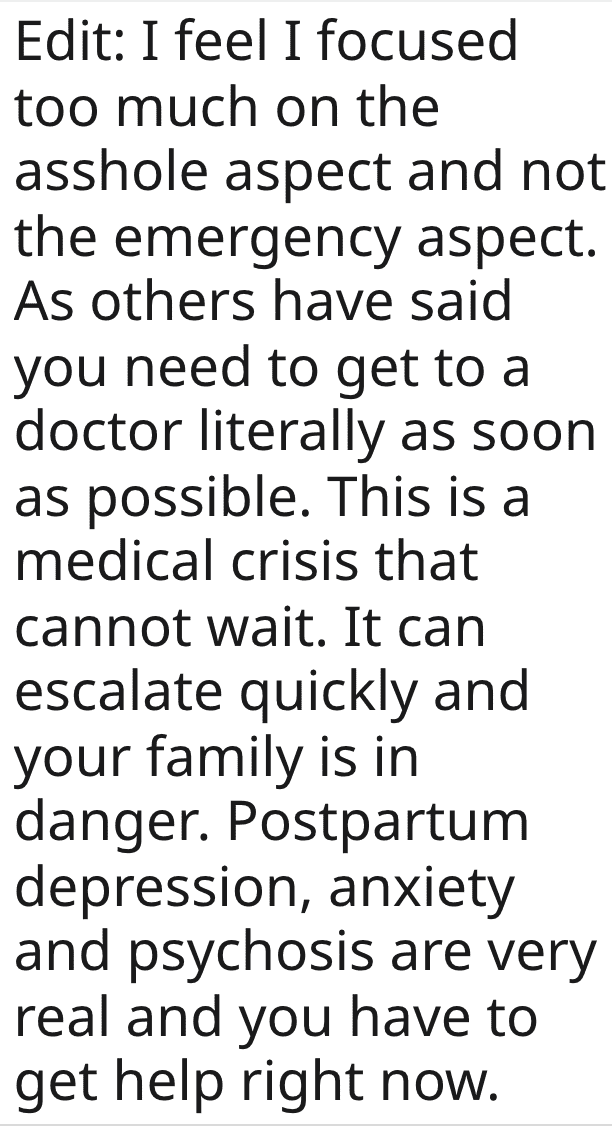 OP needs to switch gears from worrying about himself and his time with his daughter to being very concerned about his wife, who needs to be his top priority. 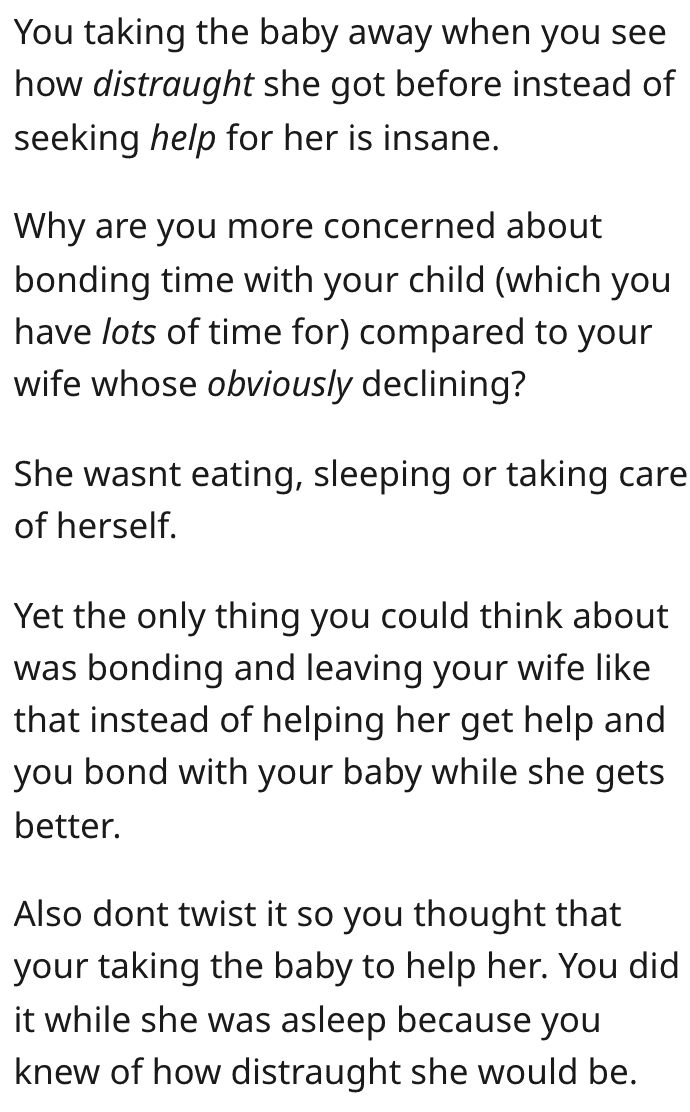 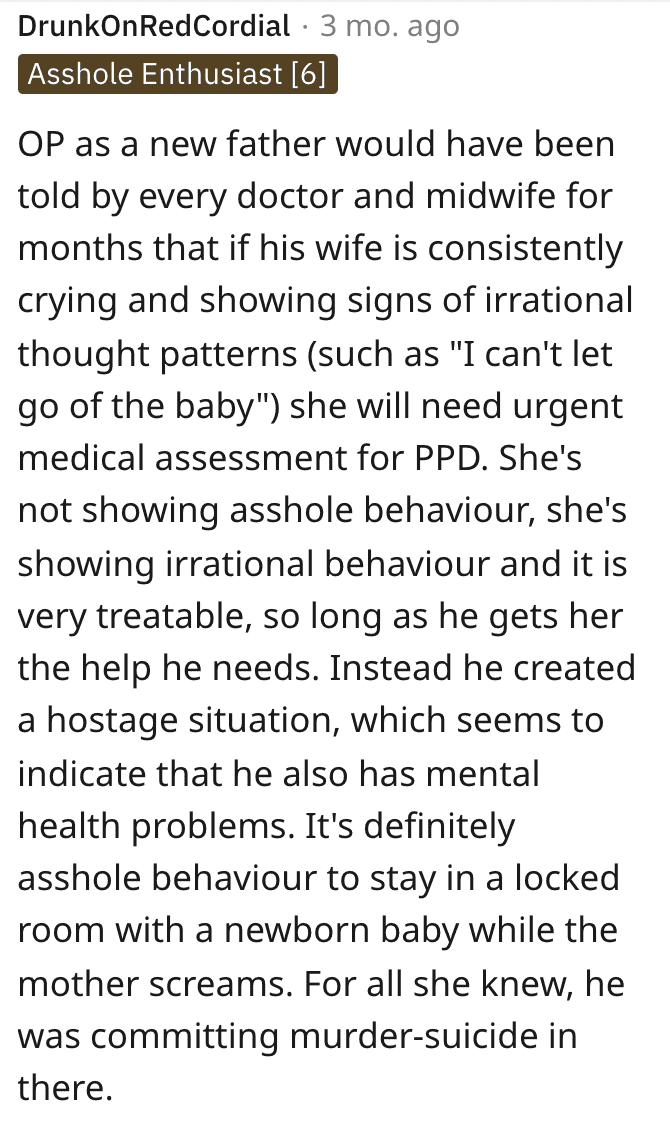 It’s true that not everyone does as good a job educating their patients as possible, and maybe Covid impacted his appearance at appointments. 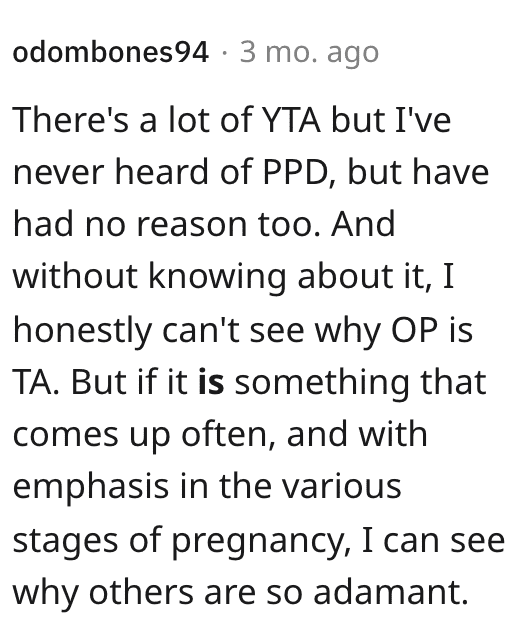 Most people agree he’s definitely crossed a line and needs to apologize, for sure. 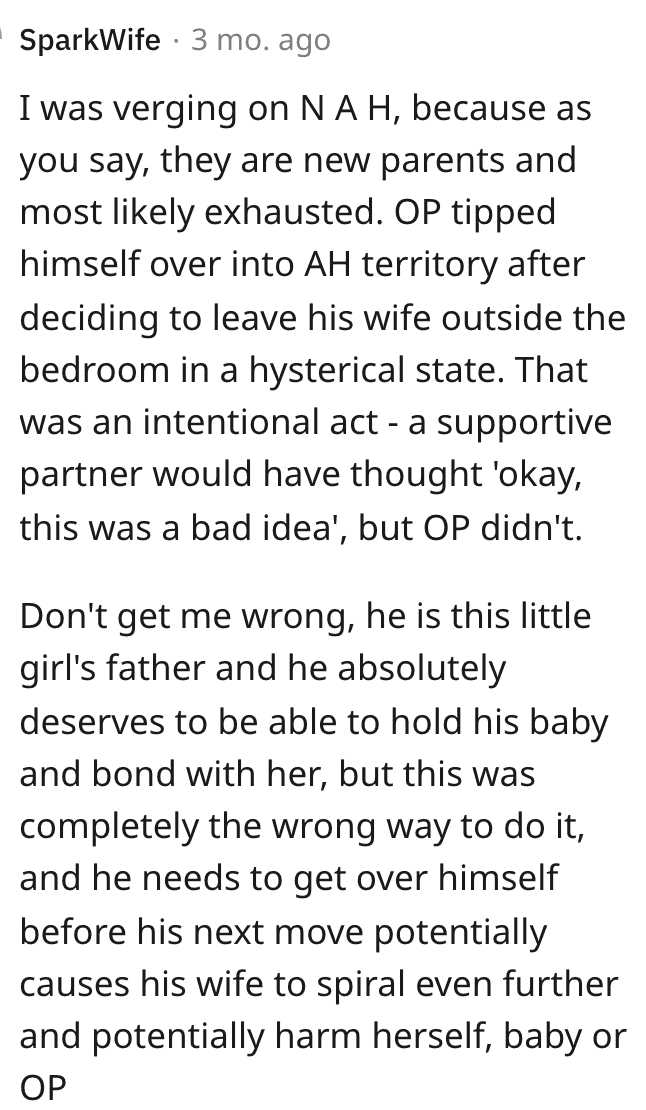 Y’all, I know that he’s also a new parents and also tired, but listen. A quick Google search of his wife’s behavior and “is this normal” should have set off alarm bells.

I’m angry on her behalf and I really hope they’re all doing ok now.

If you know a new parent whose behavior is telling you something is off, don’t hesitate to call for help!