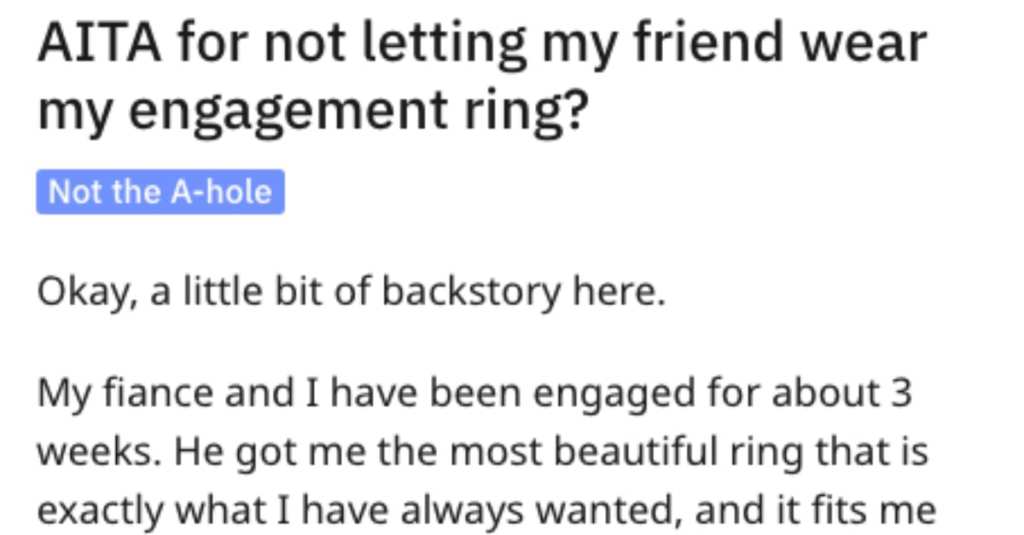 Should This Woman Have Let Her Friend Wear Her Engagement Ring?

Most of us are pretty attached to our engagement rings. They’re sentimental, sure, but they’re also worth quite a bit of money, and so we tend to be protective of them.

I would say that goes double for people who have just received them, too – like this woman, who is just so excited about her ring that she literally never lets it out of her sight.

My fiance and I have been engaged for about 3 weeks. He got me the most beautiful ring that is exactly what I have always wanted, and it fits me perfectly. The ONLY time I take my ring off is to apply lotion to my hands (I work in the medical field, which means lots of hand-washing, sanitizing, and cleaning, so my hands get SUPER dry), and when I do that, I keep it directly in front of me on my desk and within sight at all times. I have never had any sort of issue until a couple days ago.

She has a coworker who used to be a friend but really isn’t anymore, and when she walked over the admire the ring while OP had it off to apply lotion, she picked it up and put it on without asking.

I have a coworker with whom I am friendly. Let’s call her T. We used to be very close until I figured out that she and I lead very different lives, and I don’t necessarily jive with her morals. Whatever, live and let live, I let a little bit of distance form between us. But we are still friendly and still talk at the office, so naturally I told her that I was engaged and she asked to see my ring. She oohed and ahhed at it like most other people in the office, and I didn’t think much about it.

But a couple of days ago, she approached my desk while I was putting lotion on my hands, with my ring laying directly in front of me as usual. Without asking, she reached down and picked up my ring and slipped it onto her own finger instead, holding it up and admiring it, etc.

OP was so surprised that she didn’t say anything, just took the ring back when offered and tried to convince herself she was overreacting.

I was flabbergasted. I didn’t even know what to say, and I was so shocked that I just sat there in uncomfortable silence until she made a comment about how it looked so good on her and I commented “Don’t go getting any ideas!”, trying to be lighthearted but also wanting my ring back.

She eventually took it off and handed it back to me and left. I was super uncomfortable with the whole thing, but I put it off thinking I was being too sensitive.

When the coworker asked to wear the ring again, however, OP told her no and she was pouty about it. Now she’s wondering if she’s being strange or overprotective, or if her feelings are normal.

Today, I was walking past her desk and she asked to see my ring. I held out my hand for her to look at it, and she began to remove the ring from my finger, so I pulled my hand back. She got pouty and asked why she couldn’t take it off and see it, since I had let her before. I told her I had NOT let her do that before, she had grabbed it without permission and put it on without even asking if I minded. She rolled her eyes at me and said I was being ridiculous. I feel like I am justified to be protective of a ring that represents my fiance’s love for me.

People of Reddit have thoughts, y’all – let’s hear them!

Someone suggested she tell her coworker it’s bad luck (some people believe that it is!). 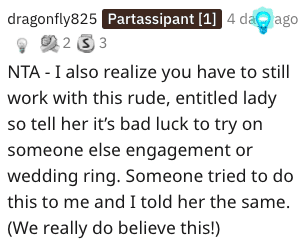 Other people went so far as to suggest she say something to HR. You know, just in case. 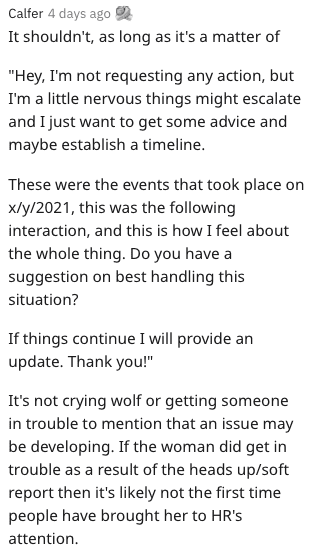 Many people for sure agreed with OP, that the woman was out of line. 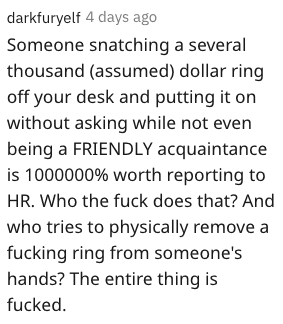 In case you were wondering…just don’t do this. 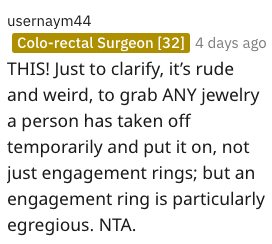 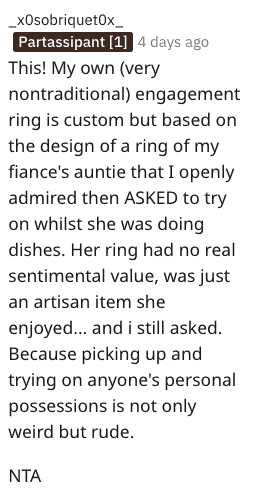 I think the other woman probably just likes playing dress up, but I also definitely think she was wrong. You can’t pick up people’s expensive things, and you certainly shouldn’t pull them off their bodies without asking.

Do you think people are making a mountain out of a molehill? Tell us in the comments!