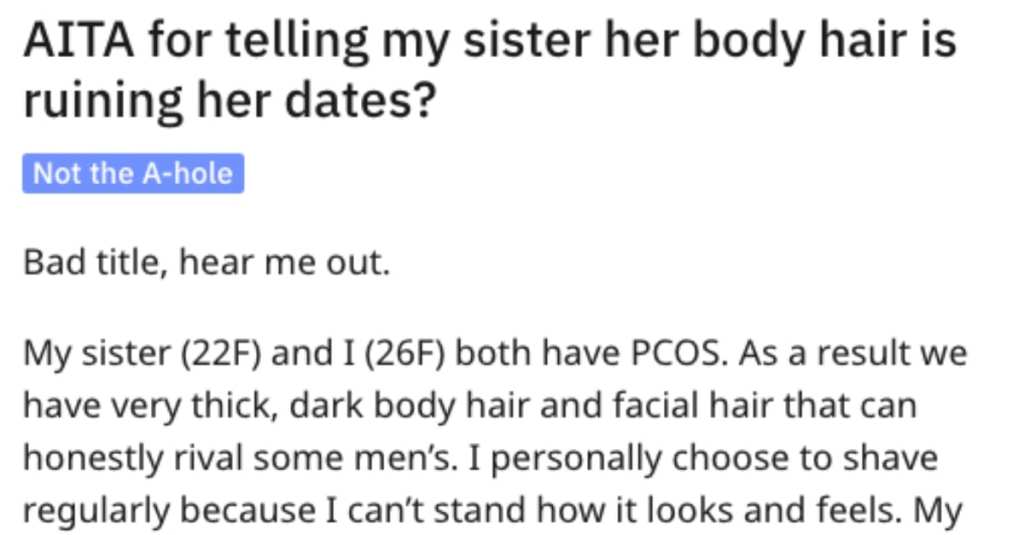 Was Sister Wrong to Tell Sibling Her Body Hair Was Standing in the Way of Love?

When it comes to other people’s physical appearances, keeping mum is often the best and really only course of action. When someone you love comes to you asking for advice or opinions – or is lamenting a problem when you think their appearance might solve the issue – the advice to keep silent isn’t always the best course of action.

This woman and her sister have a condition called PCOS that affects their body hair, leading to a thick, dark covering that society often doesn’t expect to see on women. Both girls used to shave/remove it but recently her sister has decided she wants to live more naturally – which is fine.

My sister (22F) and I (26F) both have PCOS. As a result we have very thick, dark body hair and facial hair that can honestly rival some men’s. I personally choose to shave regularly because I can’t stand how it looks and feels. My sister used to shave but about a year ago decided she wanted to stop. Of course I support her 100% and think she’s beautiful! What she does with her body is her business.

When the sister posts pictures of herself on dating sites, however, she uses old photos from when she was clean-shaven. Her dates often leave in the middle or refuse a second meeting, leaving the sister wondering exactly what she is doing wrong.

OP thinks she knows why, but stopped short of saying it for some time.

However, there is an issue. My sister uses old pictures of herself back when she was shaving on dating apps. This has led to a lot of problems in her romantic life. She often complains she never gets a second date and sometimes people even leave mid-date.

I think this is kind of her fault because she’s being disingenuous about her appearance which is a sh%tty thing to do. I have always bit my tongue and just supported her about this topic until recently.

When OP finally broke down and suggested she update her profile pictures, because leaving them gives her dates expectations that are not being met, her sister flew into a hurt rage, arguing that the right person won’t care.

The other day she was venting again about another failed date. She asked me why this keeps happening to her. I told her she should consider updating her profile pictures. She got defensive and asked why she would need to do that. I told her that it would probably help so people know what she looks like since she looks a lot different than when they were taken.

She started getting extremely angry and said that “a little body hair doesn’t make that much of a difference” and “the right person won’t mind a little hair.”

The sister and even their family think OP was shaming her, which she maintains she was not. She was only encouraging her sister to be herself from the start if she truly wants to find the right guy.

I told her that she’s beautiful but she’s giving people false expectations which is why she’s having bad luck dating. She should just be honest from the start and the right one will come along! But she was infuriated and said I was being unsupportive and misogynistic. She has refused to talk to me since and my family is now calling me an asshole too because they think I was shaming her.

My sister even posted on social media that “body hair is beautiful, the stigma attached to it is misogynistic, it sucks when your own family won’t support you.”

Now she’s wondering whether or not she was wrong to say anything at all, but she still feels like her sister is in the wrong – not because she’s being herself, but because she’s misleading people and then blaming them for her mistake.

Did I go wrong somewhere here? I love my sister and don’t think body and facial hair is a bad thing at all! But I don’t think it’s right to basically catfish people and then blame them for not being interested, and treating them like they’re horrible people when you misled them…

The internet, of course, has some thoughts, so let’s hear them out!

The top comment pointed out that her sister is obviously not as ok with how she looks now as she thought, so there are probably some deeper-seated issues at play. 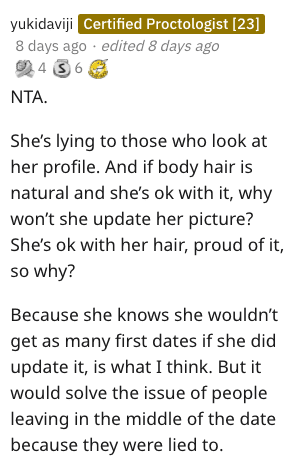 She’s attracting the wrong people, not the right ones, and the sooner she realizes that she’s the one at fault there, the better. 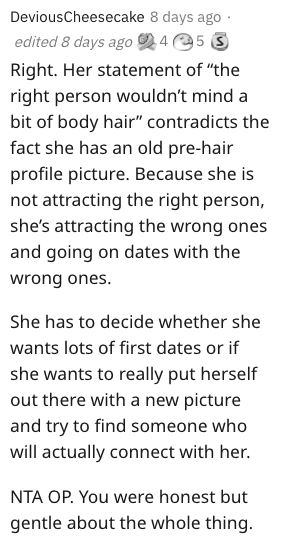 And I mean, no one really likes a liar. 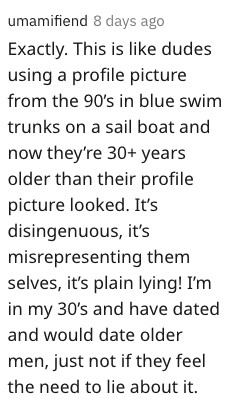 Deceiving people isn’t the way to start any sort of experience. 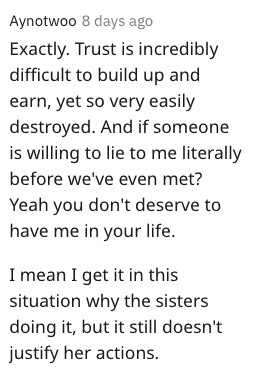 No one likes having their time wasted, you know? 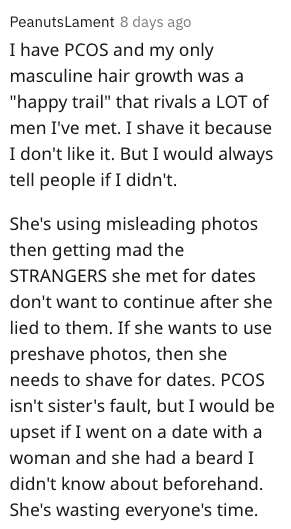 There you have it! I have to say that I agree with OP on this one.

What about you? Drop your opinions in the comments!