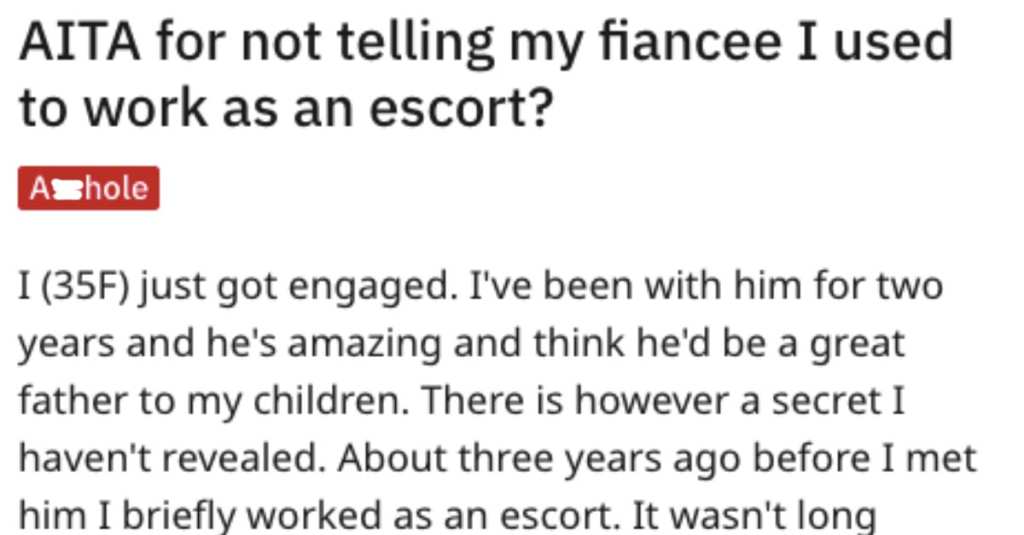 Should This Woman Have Told Her Fiance She Used to Work as an Escort?

Honesty might always be the best policy, but we all know that can get complicated when we’re talking about relationships that are important to us – relationships we really don’t want to lose.

We’re not all proud of our pasts, or sometimes we’re ok with them, but we expect that other people will judge the choices we’ve made previously – and that’s exactly the struggle this woman was having when she wondered whether keeping her former profession as an escort from her husband-to-be.

She did it because she wanted to, it wasn’t scarring or horrible the way it can be for some, and eventually she just decided to move on and do something else.

I (35F) just got engaged. I’ve been with him for two years and he’s amazing and think he’d be a great father to my children. There is however a secret I haven’t revealed. About three years ago before I met him I briefly worked as an escort. It wasn’t long (about 4 months) and I don’t have some sob story about how I felt abused and exploited because frankly I didn’t.

Like any job it had its good and bad parts. I don’t have some dramatic story about escaping it, I stopped simply because I didn’t want to do it anymore. I didn’t require therapy or rehab, I just moved on and got a normal job.

OP knows that she is healthy and has no baggage from a previous life, and she’s been honest as far as her number of sexual partners. That said, she doesn’t feel quite right about keeping something from him for the rest of her life.

She’s worried it will impact the way he sees her, though, and asks the internet for their opinions.

I have been regularly tested and have no STIs, nor so I have any emotional scars from it, so I told myself it’s now no one else’s business because it won’t impact any other relationships. However it feels wrong I can’t share this.

He once asked how many s^xual partners I had and I simply said “a lot” and told him technically the truth: that I was prolific at one point in my life but no longer am and don’t intend to do so.

I’m still scared to potentially ruin a great thing if I reveal it but I’m also not looking forward to keeping this a secret for life.

AITA for keeping it secret?

As always, they’ve got plenty to give, so let’s hear them out!

Basically, a lot of people think she’d be better off finding out how serious of a partner he’s going to be now, and not later. 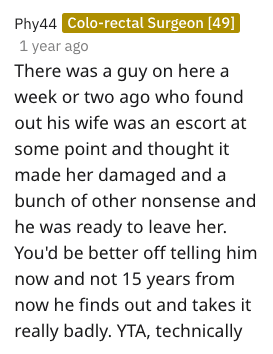 It’s less about her needing to be ashamed, and more about what type of man she’s found herself. 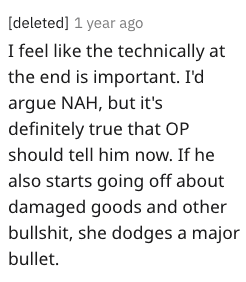 If it’s a dealbreaker, he’s allowed to call it off before paperwork is signed. 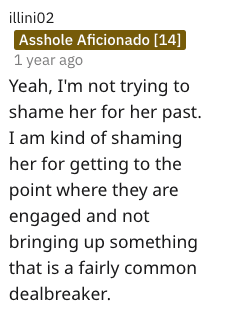 The bottom line is that it’s complicated. 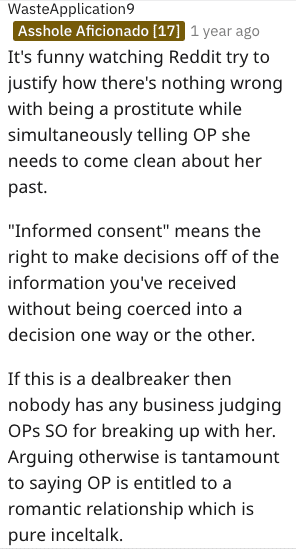 They both deserve to know what they’re getting into, right? 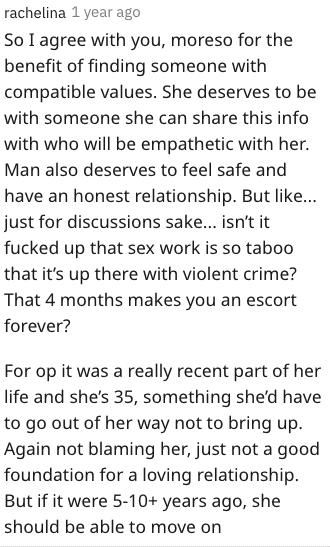 I think that she’s the a$shole, not because she was an escort, but because she allowed things to get this far without coming clean.

I hope things work out when she tells him

What are your thoughts on this one? Drop them in the comments!