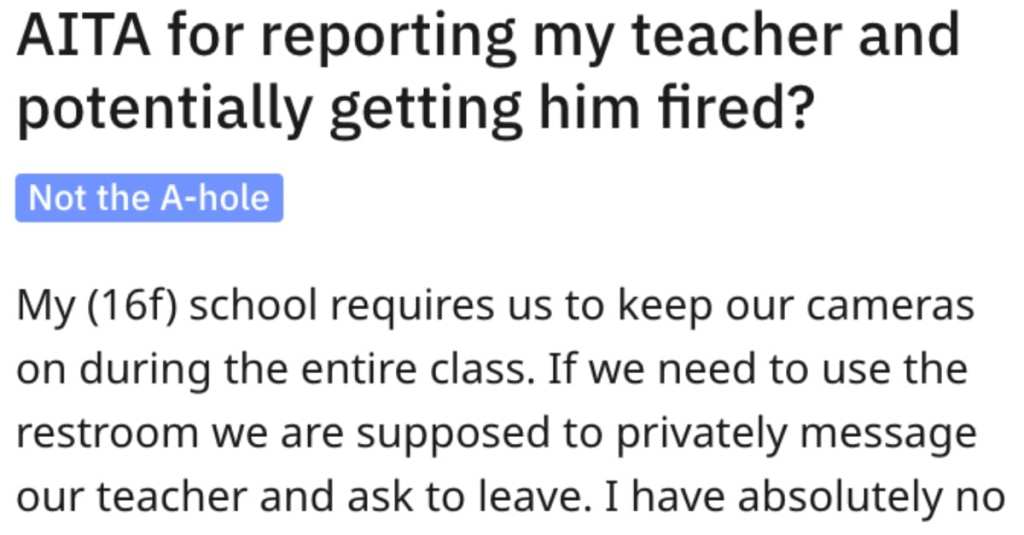 Teachers really need to watch what they say and what they do very carefully these days.

And I think that’s a good thing! Because it wasn’t too long ago that teachers ruled with an iron fist and could pretty much do whatever they wanted without any consequences.

But those days are long gone…

And a teenage girl asked folks on the “Am I the a**hole?” page on Reddit if she was wrong for reporting her teacher and potentially getting him in hot water.

AITA for reporting my teacher and potentially getting him fired?

“My (16f) school requires us to keep our cameras on during the entire class.

If we need to use the restroom we are supposed to privately message our teacher and ask to leave. I have absolutely no issue with these rules as I understand that online teaching is hard and you have to make sure everyone is attentive during classes.

We also have this system where at the end of the week every student is emailed a google document in which we are supposed to type out any problems we had with the classes during the week (eg – a teacher is favoring a student etc..)

On Thursday, I had a math class which was taught by “Mr T”. He’s never really been very strict and had always seemed quite reserved and quiet. Of course, I’ve never been in a lesson with him outside of online school so I can’t really judge.

During the class I realized I had started my period. I privately messaged Mr T asking if I could use the restroom. I waited for 10 minutes but he didn’t reply so I messaged him again, still no reply. By now I was getting extremely uncomfortable so I texted him for the third time explaining I had started my period and I really had to go.

He replies with this, “You should have planned better. Learn to control yourself” uhhh… What? I CAN’T control my period. I tried explained that I couldn’t but he didn’t respond.

I got annoyed and switched of my camera anyways and left to the bathroom. Once I came back, I saw that he had kicked me out of the meeting. I later found out the he had written me for switching of my camera and I was given a warning. I was p*ssed.

Since it was a Thursday I received the google doc and I complained about Mr T in it.

Today (Tuesday) I found out, through my mother, who is also a teacher that Mr. T is being investigated as there have been multiple complaints about his behavior and mine was apparently the last straw.

My dad, brother and few of my friends are calling me and an a**hole as I could’ve just waited for a while instead of complaining and potentially making a man lose his job, especially during this time.

Idk my feeling really guilty now. I don’t want him to lose his job.

Here’s how folks on Reddit responded to the girl’s story.

This person thinks that the girl’s entire male network that surrounds her is bad news. And they think the teacher should be fired. 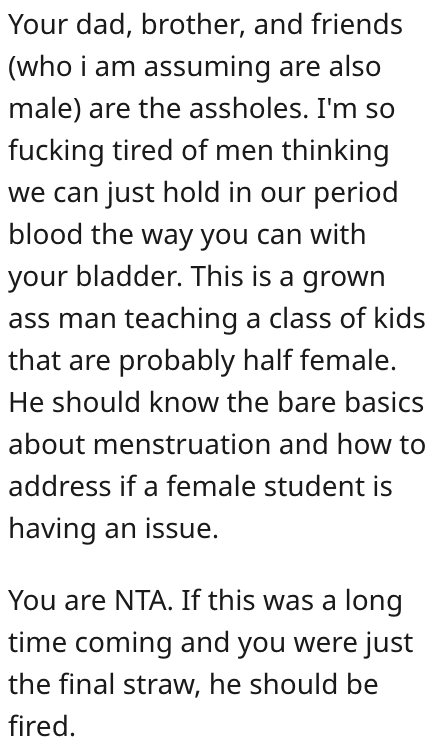 Another reader said that it’s ridiculous that an adult would even believe something like this in the first place. 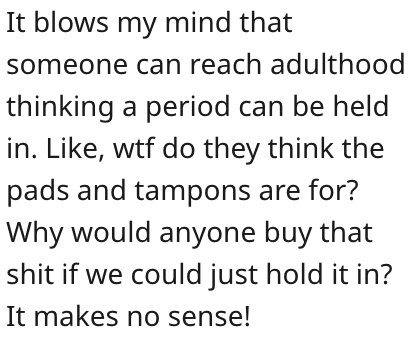 Another person said that even they know this is BS…and they didn’t grow up with a sister. 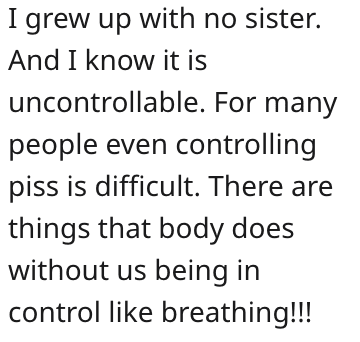 Lastly, this reader said that even if men weren’t specifically taught about this subject, they have a duty to educate themselves about it. 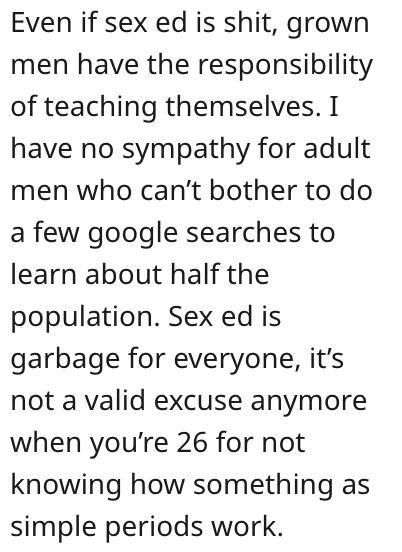 Did this student do the wrong thing?