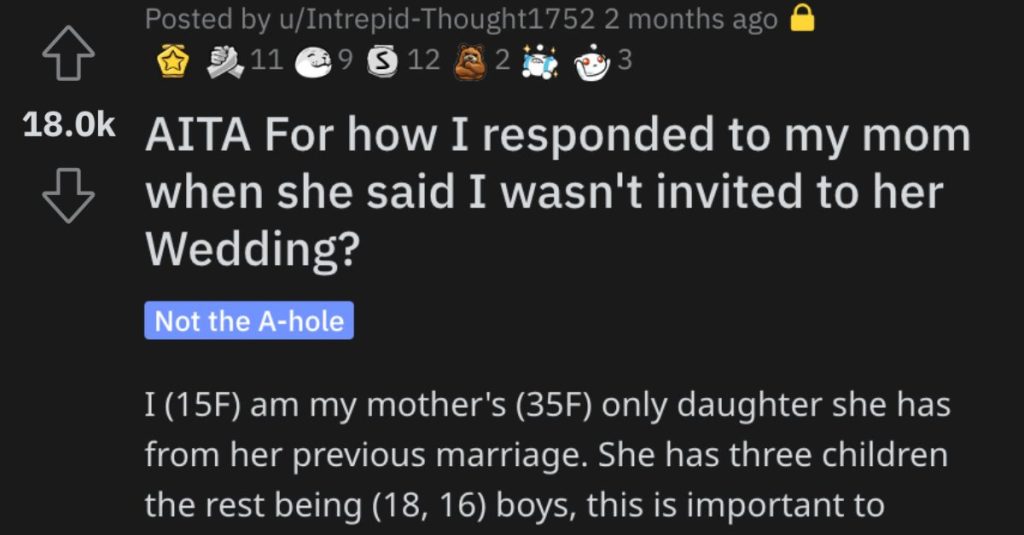 Not getting invited to your own mom’s wedding…?

But there’s gotta be a good reason, right?

Check out this story from Reddit’s “Am I the A**hole?” and see what you think…

AITA for how I responded to my mom when she said I wasn’t invited to her wedding?

Last week my mom was talking with one of her friends about the color she wanted the bridesmaids dresses to be. My mom had been planning this wedding with her new boyfriend for the past two months or so, they have been engaged for about one year.

The wedding is in December and on the day before my birthday, me and my mom have been planning a party for me around the same time she was for the wedding. She insisted it was alright and that her boyfriend and her would go on their honeymoon the next day.

While she was talking I asked her when we were going to look for my dress since she had asked me to be the flower girl. I could see the disappointed look on her face when I asked her which confused me. She responded only a few minutes later and said “We’ll talk about it later.”

A few hours later my mom came to me. I thought she was going to talk about the dress situation but instead she sat me down and explained how her new boyfriend thought it’d be a better fit for their three daughters to lead the wedding.

Whatever, I was cool with that, but it’s important to note that my mom had always wanted all girls, I was a girl but I had looked too much like my father which caused a strain in our relationship. My dad explained to me how my mother had postpartum when she had me and just couldn’t connect with me because of it.

So when she gave birth to my three younger step siblings who all looked like her(triplets 6yo) she was obviously overjoyed, it hurt to see but I was happy for her. My brother’s had a similar experience but were significantly better because they looked more like her. I know this is an over dramatic thing to say but sometimes I feel like because my mother didn’t feel as connected with me at birth was because I was a letdown right out the gate.

After she was done I asked her again about the dress because I still didn’t have one, again that same disappointed look on her face came before telling me I wasn’t invited to the wedding, simply because her boyfriend thought I would upset his family because I was from my mom’s previous marriage and he didn’t like my dad.

She also explained how my birthday isn’t happening either due to him wanting to go on their honeymoon right away. It turned into a screaming match with me yelling “I’m sorry I don’t look like you enough for you to love me. I’m sorry you were too conceited for you to get over the fact I look like my dad.”

I was kicked out by her boyfriend within the same hour because she had cried to him about what I said. All my brothers know what happened and have now refused to go to the wedding which upset her even more, though I don’t care about how she feels right now. My brothers had an actual relationship with her and I probably just messed it up by letting my anger get the best of me.

One individual said she’s NTA at all. 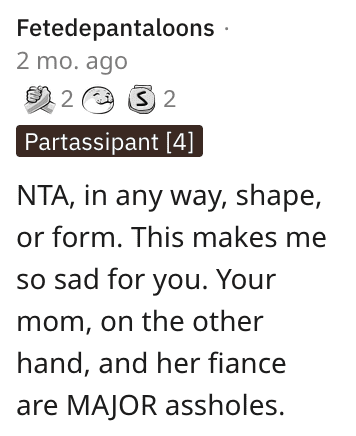 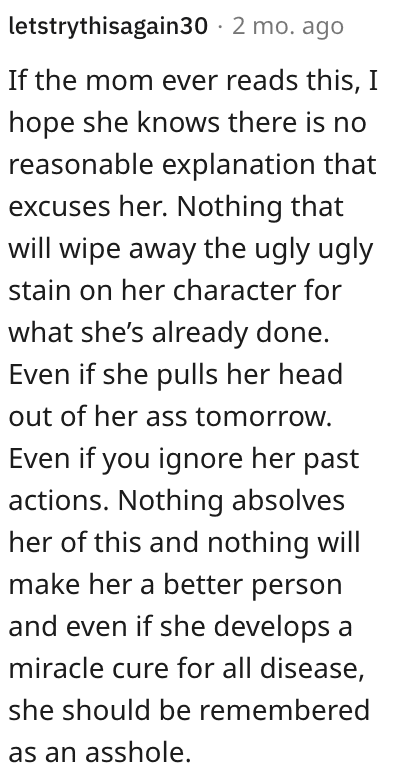 This Reddit user said she’s NTA and said what they’d do if they were her. 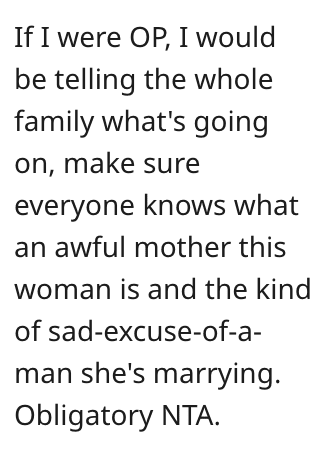