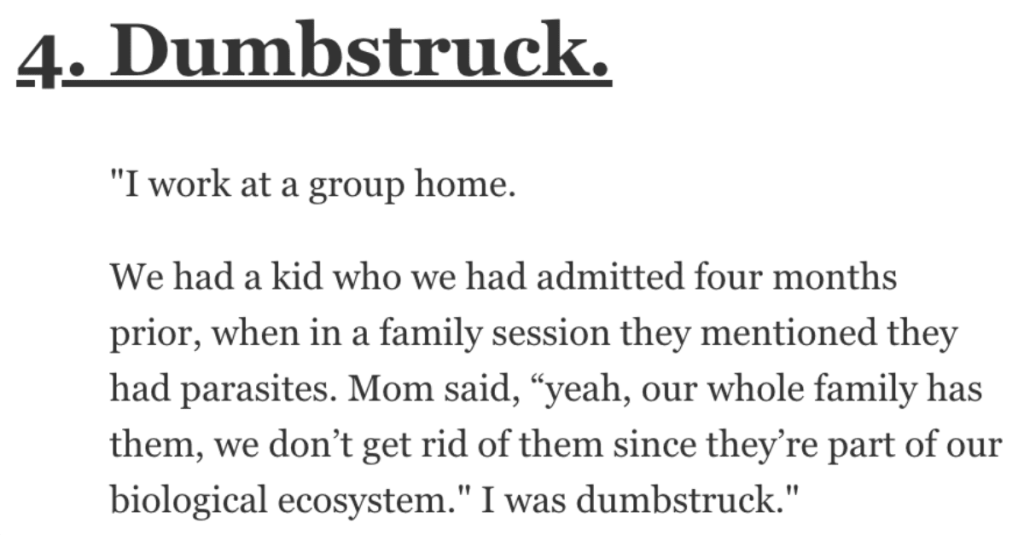 We all have semi-interesting things that we deal with at our jobs on a daily basis, but therapists really see and hear some wild things.

And us non-therapists never really get a peek into that world…until now!

Therapists got real on AskReddit about the unusual things they’ve seen and heard on the job. Let’s take a look.

“I was counseling a 13 year old girl for anxiety and she reported s*xual abuse from her step dad. I called her mom and told her mother I needed to call child protective services. Turns out that CPS was already aware and the abuse was first report around the patients age 7.

Mom was aware of the abuse and stayed with her husband anyway. It was a complicated situation, and it wasn’t. How could she not do more to protect her daughter?!

“My professor once shared what a patient said that made her quit her job: “I didn’t r*pe my daughter, she liked it.” The daughter was six.

She couldn’t take it anymore. She worked in a rehabilitation centre for people who have been sentenced for serious crimes and were forced to get mental help.

Really difficult job and this pushed her over the edge.”

“Once had a patient whose wife shook their baby to death. He wanted help reconnecting with his wife.

At the time I was a young father of a newborn myself, and he triggered a lot of fear in me for my own child, a deep loathing of his spouse, and pity (the “how pathetic” kind) for the patient.

I tried for 3 sessions, met his spouse and everything before handing the case over to my supervisor (who knew about my initial reactions, and tried to help me through it).

Unfortunately, it ended up being more about my feelings than his, and I was new to the profession at the time. These things are expected to crop up from time to time, but I was still taken aback by my own reactions.”

“I work at a group home.

We had a kid who we had admitted four months prior, when in a family session they mentioned they had parasites. Mom said, “yeah, our whole family has them, we don’t get rid of them since they’re part of our biological ecosystem.”

We spent three weeks afterwards convincing this family it was an infectious disease concerns as other residents have fecal eating behaviors and various other unsanitary issues that could cause a unit spread.

Three weeks of education, planning, and worse of all convincing this kid and mother that their IQ wouldn’t drop because they had agreed to irradiate the parasites!!!

Lots of CBT work, but Jesus it took way longer than any of my team expected!”

“I work with kids who have experienced some kind of abuse/trauma (90% of my clients have been s*xually abused). I have a lot of holy sh*t moments but not from judgment of my clients but from what happened to them.

I’ve had clients whose father made them help him dismember mom’s body after dad murdered her in front of them. I’ve had clients under the age of 8 who have been s*x trafficked.

I’ve had clients who have been forced to film torture p*rn. I have holy sh*t moments all the time.”

“I feel like a lot of the comments saying that they NEVER judge their clients might be working in voluntary services or they’ve been very fortunate in their client base. Judgement isn’t an inherently bad thing. It’s how we know that murdering people is wrong.

So when a convicted pedophile client told me, “nothing gets me going like a pair of little girl’s worn panties”, you better believe I judged the f*ck out of him. I continued to work with him and I treated him with compassion and respect because he’s a human being worthy of both; I did my job because I’m a professional.

Understanding your own inherent biases and how they influence your work is a very important part of training and practice.”

“As the pandemic worsened here in the US and more lock downs are on their way, one of my most extroverted clients and I brainstormed ways to meet her social needs while remaining safe.

I let out the deepest most defeated sigh after I hung up the phone.”

“I ran a men’s anger management group though, and some of those men had done some terrible things to women. Most of them I found ways to like and admire for their positive aspects, but there were two guys in that group I just could never find “unconditional positive regard” for.

One guy basically never spoke in group. He would give one word answers and occasionally just discuss how unfair the “system” was to him. I worked really hard to open him up and find things to connect over but he never opened up to me or the group. He left the group after he strangled his girlfriend and went to jail. She survived thankfully.

The other left group early routinely, showed up late, participated minimally and similarly never wanted to open up honestly. He left early one group after we had discussed him staying to the end and threatened me when I told him he wasn’t going to get credit for attendance (something the court required).

Oddly, I eventually moved into the apartment below him (completely without knowledge) and listened to him scream at his girlfriend and break sh*t while I called the cops.

I judge these men. They’re sh*tty. Maybe they’re redeemable, but redemption requires self-exploration and they both refused to do so. It’s worth noting how differently I felt about them than so many others in the group; men I found ways to help and admire and respect even in spite of their awful behavior in the past.”

“I work with youth and adolescents who have anxiety, trauma, and/or depression. Some of the kids I worked with had some pretty severe attachment issues. Regardless of this, I never thought I’d have to seriously explain:

“You can’t just buy a straitjacket for your kid.”

“Feeding your kid ultra Spicy Ramen each night instead of the meal everyone else is eating isn’t specifically defined as abuse, but you have to understand the emotional abuse that this causes.”

“Your kid isn’t trying to kill you because they stand in your doorway at night crying. Thats likely because they’re scared of their traumatic nightmares, but feel like you will just yell at them if they wake you up.”

“A woman who deliberately kept getting pregnant because she enjoyed the attention, and then would immediately afterwards dump her kids with the foster system or in one case a willing relative.

She had six kids at the time I met her…”

“It’s not often I get to talk about my profession, but here goes: I was working at a drug and alcohol rehabilitation center and had a client come in who was a self proclaimed “drug lord”.

As we worked together, he told me about his history. Included in this history was how he got to where he was currently at.

During the conversation, this man admitted to selling his sister into s*x slavery, forcibly injecting her with several sedatives and narcotics, and having several people “teach her a lesson” (what this meant, he never shared). He told this story with a blank face, smiling only when he recalled the “good times”, which he referred to as times when he had enough heroin to get through the day.

I’m not sure where he is at now, but this man inspired me to work with victims of s*x trafficking, because not only do they deal with the stigma of “selling their bodies”, they often manage drug addictions.

People would honestly be floored of they realized how many people were addicted to chemicals that they were forcibly given.”

“I work in mental health and have worked in acute and crisis settings for the majority of my career.

The most notable event I experienced was when a young person had presented with significant ongoing suicidal ideation who was dealing with a lot of sh*t. I spent a lot of time with them mostly deescalation and working out what the plan should be moving forward.

One of their parents came in a little while later and I had the opportunity to speak to them about where their child was and what had been going on, with their consent of course. Midway through me trying to explain some of the psychological constructs and ways the parent could help they said to me, “is this going to take much longer I have a show to go and watch”.

All I can say is, I never judge my patients, I have never walked their path or viewed the world through their eyes. But the people around them who perpetuate the suffering of the people I work with through ignorance, malice and selfishness, I judge them.”

Have you ever had any major “oh sh*t” moments at your job?