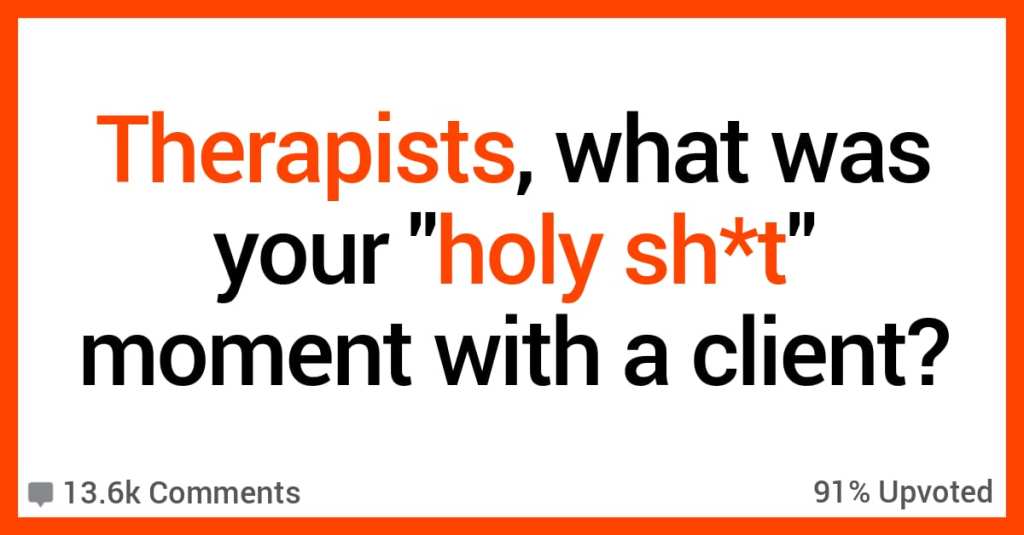 Therapists Shared Moments When Clients Really Caught Them by Surprise

I really admire therapists because they have a very tough job.

But we’re dealing with professionals here, okay? And we’re in luck because they talked about some clients that did some crazy sh*t.

Therapists opened up on AskReddit about some of the more interesting things they’ve seen on the job.

“Parents of a “troubled” child, which turn out to be the problem themselves.

Total refusal to do any kind of introspection, try to convince everybody (cps, police, psychologist, doctor) the kid was the problem, complain the kid was… A kid (a teenager a that point) by growing too fast and costing money to feed and clothe.

He had smashed their t.v. with an axe. Turns out they hadn’t speak or pay any attention to him in several years and they spent 99% of their free time watching t.v. Kid had no other behavior problem, great in school, very calm. He just reach a point where he couldn’t stand being ignore any longer so he had what she called a “Fried Green Tomatoes” moment.

Parents dismissed their responsibility, only problem they saw was the wacked t.v. Kid got emancipated at 16 and moved to f*ck out of there.

She had a private practice and the only times she expressed any judgment was when someone seeks therapy but refused to do any work or partake in the process. Paying a therapist is not paying someone to agree with you.

“I now work in the jail and there are quite a few s*x offenders in my program.

I struggle with the ones who honestly believe their victims (as young as 8) were in mutual loving relationships with them.

3. Give yourself some credit.

“Some of my clients are SHOCKINGLY BAD at giving themselves credit.

They might get a nearly straight A GPA in a brutal major while battling depression, or overcome years of phobia and get behind the wheel again, or write a literal novel, or raise a kid as a single parent with low income

Rr build new relationships after being burned, or cope with OCD well enough to hold down a job. And they’ll talk about themselves as if everyone on earth is better than them, as if their accomplishments are worthless.

And I know it’s because of depression or anxiety or another condition, but I’m often stunned by how differently I see them compared to how they see themselves.”

“Had a patient apologise for crying during a consultation, saying ‘I know I shouldn’t be sad, I’ve got so many great things going for me’

Three months ago you had to move back to your parents after an unexpected breakup.

Back to the environment which contributed to your official diagnosis.

The same place where your sister was living- before she died, one month after your return to that house, of the same diagnosis you have.

And because she died during a pandemic, not only could you not visit her in hospital before she died, you had difficulty organising her funeral.

In addition to all that he felt financially responsible for both his parents as they’d both lost their benefits- a loss which they couldn’t appeal as their mental health was so poor the concept of fighting that decision was making them suicidal.

I want to hug a lot of my patients, but this one made my heart ache.”

“The one thing I’ve judged is the situations that people survive and continue to live their lives.

I’ve worked with torture survivors, survivors of genocide and famine. I’ve worked with people whose entire villages were wiped out because a war lord wanted the water well that was sitting in the town.

It always gives me pause in terms of the anguish some people face and their resilience. So if I have one message, it would be in the words of RJ Palacio, “Be kind for everyone is fighting a hard battle.””

“I’m a psychotherapist on an adult inpatient unit, so things rarely phase me. I purposely do inpatient because the thought of seeing people for years at a time bores me.

I’ve been kicked, spit on, seen a lot of nude people, but I help pull people back from their darkest points. It’s pretty awesome. My theory is everyone has a story of how they got there. Even a pedophile.

That being said, I had a patient that was having consensual s*x with her uncle. Very wealthy, society type people. She went very in-depth about the relationship. That one weirded me out.”

“I currently have a young female client that is struggling with homelessness, a history of trauma, s*xual abuse, etc.

She’s not handling these things well, as can be expected. Grandmother, who is her only support, keeps kicking the ten year old out of her house (making her homeless at ten) for acting out, and told me she can’t understand why client won’t just “act right.”

Lady. Are you serious?”

“There was a client a young teenager that was hearing voices to hurt himself.

He had multiple crisis calls and was admitted several times to crisis centers for observation until he got prescribed meds and was starting to show improvement.

He was starting to disclose that he may have been Gay and was stressed out because his father was old school religious and a pillar of the community.

The young man was recommended to go to treatment abs start in a facility to keep him acclimate to he meds and just to give him some coping skills and all that.

His father pulled him out AMA and refused to allow him to continue medication. He also discontinued his therapy for a more religious approach.

3 months later he completed his suicide.

I see that father around and I want to f*ck him up. I wish I could.”

“In working with a young elementary aged student, he would start mast*rbating when explaining how he wanted to kill his teacher and classmates in gruesome detail.

Thankfully we were able to transfer him to a more appropriate day school setting where he could receive special services.”

“Couples counseling; parents of a baby (4 or 5 months old).

We are halfway in our session when I ask them about their baby. Mom: she is in bed right now. Me: ah, grandparents babysitting? Dad: no, she is at home alone. Nothing can happen to her. We bought a special mattress, one where she (baby) cannot suffocate

Me: mouth open… staring at them for a couple of seconds. Then: how long did it take you to get here? Mom: 15 mins or so. Me: alright, the session is over.

I want you guys to go home immediately and call me when you arrive. Please hurry. And Never ever leave your baby alone!”

“I’ve worked with some really sh*tty parents in my career. Probably one of the worst was the mom who kept sneaking the stepfather back into the house who was being investigated for molesting her daughter.

Hard not to judge someone who puts her own daughter at risk so she could get laid.”

“It is highly unlikely for me to have moments where I judge my clients.

It happens sometimes, but I’m able to shut down those thoughts quickly in my head and return to being present for the people I see. People are so incredibly complex that my judgment wouldn’t have any meaning anyway and it doesn’t have a place in our work together.

I will admit though, something that does get me feeling a little salty is when I have a client’s parent that attempts to sabotage the therapeutic relationship I have with their child.

Or pulling them out of therapy entirely when some of the things we talk about challenges some potentially unhealthy family dynamics. I don’t feel anger toward the parents, mostly I feel bad for the kid.”

What do you think is your biggest “oh sh*t” work moment?