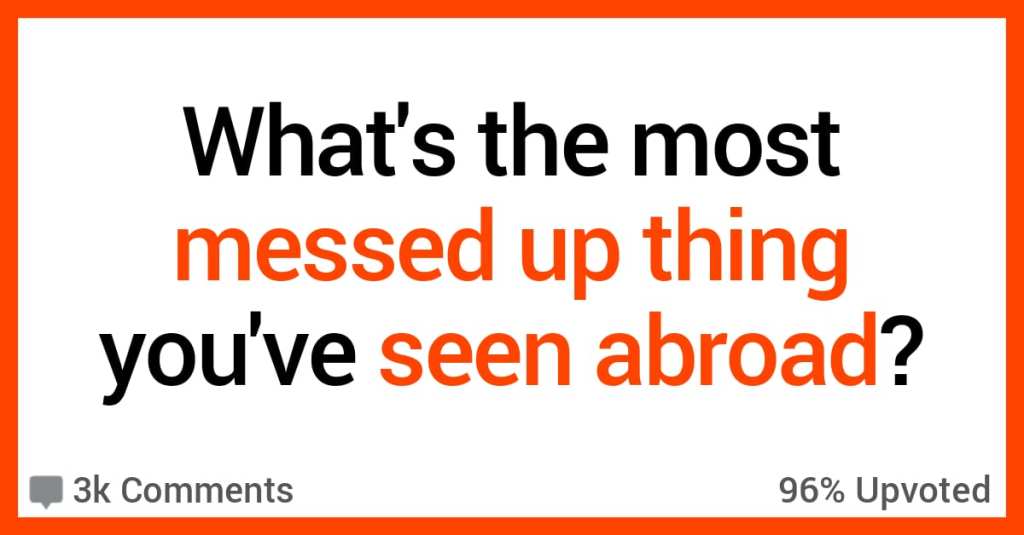 These 14 Tourists Had Some Pretty Wild Encounters While Abroad

Traveling is one of my favorite things to do. It’s great to get out of your comfort zone, take some time away, see some new sights…sometimes, though, we get a bit more than we bargained for, and the cultural divide can see huge.

These 14 people stepped into situations they were not prepared for at all, but at least if you read about what happened to them, you will be.

6 year old kid selling sweets on the streets in Brazil. Spent some time talking to him. His parents had convinced him that school was for suckers and that he wouldn’t like it. So sad to see. This kid was full of charisma, well spoken and clearly intelligent even though he couldn’t read or write. Such a waste of potential.

Really hope he gets an education at some point and gets to so something meaningful with his life.

Saw the cops in Barcelona hit some street kid with their nightsticks unprovoked and completely out of the blue. Kid never saw it coming. Smoked him right in the throat.

He was just walking up the street, cops were walking toward him, and just unloaded on the poor kid. Left him there, too. They just walked away. Horrible cheap shot.

Chained and drugged baby big cats for photo opportunities on the streets of Cancun.

11. Hopefully someone was watching.

In Nepal I saw a two year old sitting alone on a busy sidewalk. He/she had a cup for begging.

The sad thing is the child was probably being used as a pawn by someone.

The child would take the money back to an adult at the end of the day, in exchange for a crowded room to sleep, filled with a dozen other kids doing the same thing.

10. It only took one breath to get a real sense of NYC.

Day 1 of our honeymoon- getting off the subway in NYC. Looking up at the huge buildings outside MSG in awe of how cool everything was, look down and see a homeless chap shitting in a carrier bag in the middle of the busy street.

No one bats and eyelid.

Welcome to the big apple

In Vienna I saw a homeless man sat at a bus stop, naked from the waist down, writing a music score.

Seen a lot of pretty strange and alarming things, but for some reason one that really stands out is Garbage city in Cairo, Egypt. A lot of Cairo is pretty run down, many people living in houses and homes that are missing walls and roofs with garbage and filth all over the place, but Garbage City was something else.

Kids, women, grandparents, everyone was sorting through massive piles of trash outside of their homes so they could scrape together a living. Those with babies would have them laying on top of the mounds of filth while they worked.

Seeing the babies and children in and on the trash really stuck with me for some reason.

Lived in Saudi Arabia as a kid for a few years. Public beheading was pretty f*cked up.

Saw a few dead bodies on the street in a couple places in SE Asia. Pedestrians just walked over or around them.

I was held against my will in a brothel somewhere in the Caucuses. I’m a guy and I was there ostensibly as a customer but more like brought by people I barely knew as a sign of “hospitality” despite my protests. They left me there with armed guards patrolling the grounds. Since I didn’t speak the same language as them, when I tried to leave they corralled me back, guns drawn. Several hours later, the people that brought me collected me and wanted a detailed account of how it went. Thankfully I thought ahead enough to ruffle my clothes and hair. The prostitute insisted I take her number and call her if I wanted to “hang out”.

Same city, walking around downtown with a buddy and his girlfriend. We see a group of guys hassle a couple. There must have been 3-4 guys and they started attacking the boyfriend. I wanted to intervene and even the odds. My friend stopped my and said that we couldn’t get involved because now our task was making sure his girlfriend was safe. He assured me that everything was going to be OK for that guy.

Before my friend even finished talking, random people walking by intervened to help the guy. When I say help, I mean “beat the offending party to within an inch of their life”. Apparently hassling a guy walking by himself with a female is a major taboo over there so random strangers were so insulted they tore into the guys. They coordinated enough to have some people holding them up and others taking turns whaling on them.

I legit thought they might kill them and this was a major walking street in view of police. Police watched the whole thing and threw the guys into their car after they’d been beaten to a pulp. I was later told the only people who would have violate the social norm were either country bumpkins or drug addicts so no tears need be shed.

This comment is getting some attention so I should clarify this happened in Azerbaijan. The city was Baku but the brothel was either on the outskirts or in a suburb. I’m sorry, my experience in the West has been peoples furrowing their brows when I say Azerbaijan so I opted to be more general. You all are some scholars and gentlemen.

Someone tried to kidnap my sister in South Africa.

I remember someone in a crowd tried to yank her away and she managed to slip free and the dude just disappeared into the crowd.

In saint Martian in the 90s saw a guy from the nudist beach wander over to a payphone and make a call.

Always wondered were he kept his change.

2. What on earth is wrong with people?

Not another country, but I went cliff-jumping in Oahu (about 30-35 feet) and there was a 4 or 5 y/o kid standing at the edge of the rock, crying because he didn’t want to jump. His dad was forcefully shouting at him that he could do it, ‘do you want me to push you? Jump, don’t be afraid boy!’

The kid kept full-on tantrum crying so the dad picked him up screaming and and just threw him off. He spun in the air and definitely didn’t land feet first, and surfaced still screaming. Felt so bad for the kid.

1. That’s something you don’t forget.

I remember walking down the street in cusco and seeing a cute street dog playing with a plush toy and throwing it in the air.

When I got closer the dogs mouth was bloody and I realized it was eating a guinea pig.

I have no idea how I would have reacted to any of these things in real time.