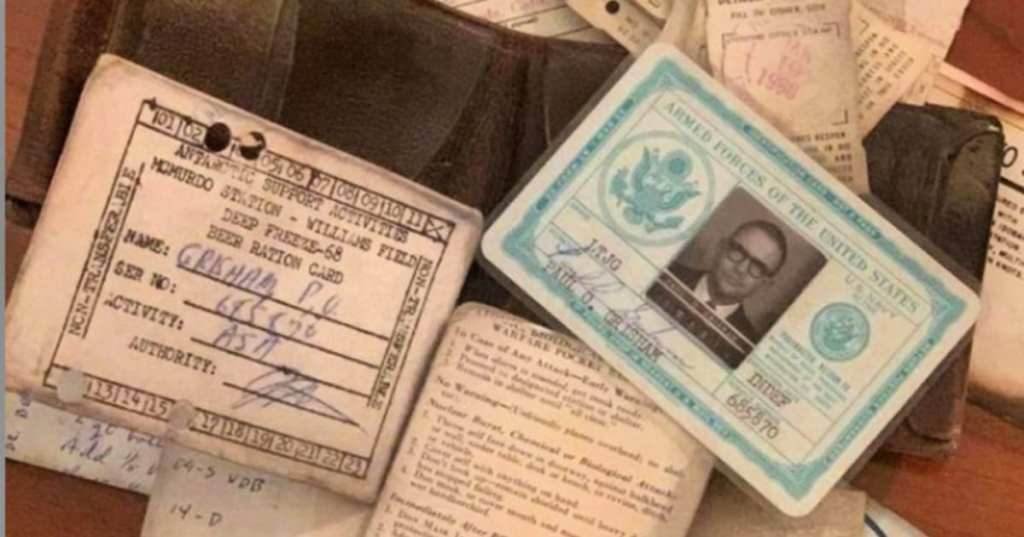 There’s nothing quite as disconcerting as losing your wallet. It contains money, your ID, a bunch of cards that will have to be canceled and then updated on various sites, and on and on – it’s more than a little annoying, basically.

That annoyance and stress doubles when you lose your things on vacation, away from your home base where it will be simple to have things canceled and replaced – and I imagine it’s far more stressful than that, even, to lose them somewhere like Antarctica, where it’s very unlikely to ever be found.

That’s what happened to retired Navy meteorologist Paul Grisham, though, when he returned home from being stationed in Antarctica in 1968.

Grisham, 91 now, was surprised to have his wallet, which was found when some old buildings at McMurdo Station were demolished, back in his hands.

“It brought back memories, oh yeah.

I had dark brown hair at the time.”

Grisham lived on the base from 1967-1968, which I’m guessing is plenty long when we’re talking about Antarctica.

Back then, the Navy men called service in the Antarctic “The Ice,” and his wallet was full of relics, like a beer ration card, his driver’s license, and instructions on what to do in the event of a nuclear, chemical, or biological attack – and a handwritten recipe for making homemade Kahlua, which I kind of want to try.

His job on The Ice was mainly to monitor the weather and to provide reports for the airplanes and ships delivering more personnel, equipment, and supplies.

“The entire station worked 12 hours on and 12 off around the clock for a period of five months because there was so much to do to get ready for the long, black winter.”

The cold, Grisham still recalls, was nothing to sneeze at.

“It’s almost inconceivable just how cold it is.

It’s almost impossible to describe to people who haven’t been there.

In fact, we spent a lot of time trying to figure out ‘how to we explain this to the folks at home?’ and we just never really came up with a good way to explain it.”

One example they used was a soda can, which would freeze and burst within 14 minutes if left outside in the elements.

It wasn’t all work, though, as McMurdo contained both a two-lane bowling alley and a small gym, and the men there found plenty of ways to amuse themselves.

“The one thing that really made life worth living down there was the people that were there.

We wintered 180 men and they were the most congenial, likable men that I ever had the pleasure to be around.”

They played a lot of cards, Grisham recalls. It was mainly poker, and the money order receipts for his winnings – sent home to his family – were still tucked in the wallets as well.

He even got to meet explorer and mountain climber Sir Edmund Hillary while he was there, and recalls the legendary figure picking his brain about the weather.

Grisham returned home after his tour, assigned to San Diego and later an aircraft carrier in Vietnam. He retired in 1977 with 25 years of service under his belt, and set off to continue traveling the world.

After the death of his first wife he met a woman, Carole Salazar, in Paris and the couple have settled back in San Diego.

His 26-year-old granddaughter Christina Salazar, is enamored with the find, and marvels at the way the wallet looks as if he could still use it.

“Growing up, it was always my favorite to listen to him talk about the Emperor penguins that he would encounter.”

She says that a good gin martini is the way to get him talking about those days, and that “it’s an honor to share a martini with him and listen to him talk endlessly about his time.”

She learns something new every time they talk, and I have to say, I think he’s still accomplishing great things every single day.

May we all be able to say the same after 91 years on the planet.