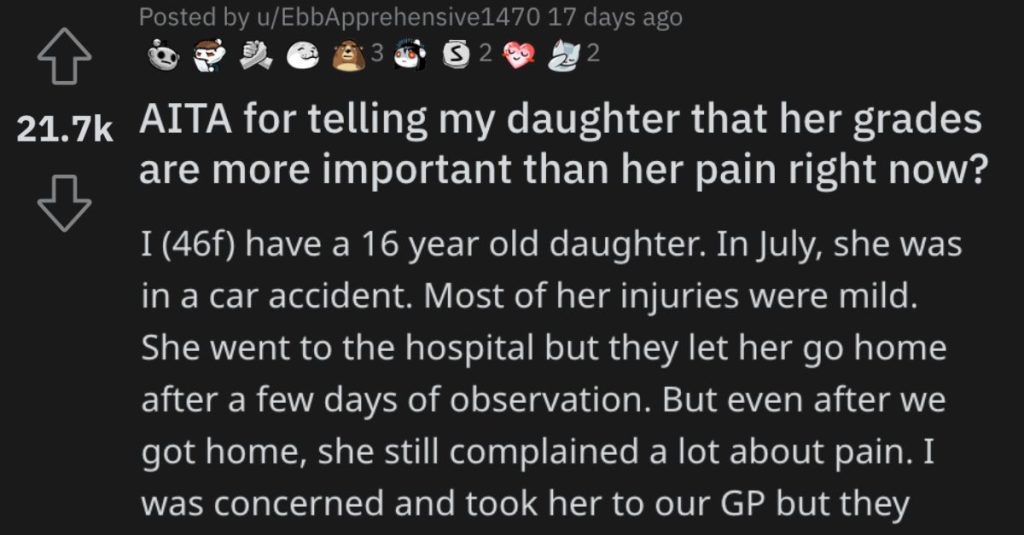 Is this kid faking it?

Or is her mom pushing her too hard and not being sympathetic?

That’s the dilemma at the heart of this story from Reddit’s “Am I the A**hole?” page.

Let’s see just what the heck is going on here…

AITA for telling my daughter that her grades are more important than her pain right now?

She went to the hospital but they let her go home after a few days of observation. But even after we got home, she still complained a lot about pain. I was concerned and took her to our GP but they couldn’t find anything wrong.

I told her it was probably in her head and in response to the traumatic event and that she’d be fine in a few days. She stopped complaining about it after that and everything seemed good.

Fast forward to yesterday and I got an email from her teacher that’s she’s constantly despondent in class and laying her head down and not participating. I was already seeing red from that and I decided to check on her grades. She turned in multiple assignments late and lost points on them, which is not at all on par with her typical performance.

I confronted her about it and she was really quiet at first, like she didn’t know what to say. I pushed her on it and she started talking about pain again which I frankly think is bulls**t.

She hasn’t said a peep about it for two months, only when her grades are slipping. We started arguing about it and I said that her grades matter more than her “pain”. She’s a junior this year, it is not the time to be slacking.

She’s been in her room since, refusing to talk to anyone. She wouldn’t even go to school today. I’m at a loss, she’s never been so difficult. And I’m questioning whether or not I’m in the right here.

Now see what Reddit users had to say about this.

This reader said that this woman is an a**hole and she needs to do better for her daughter.

Another individual had some serious questions for this mom… 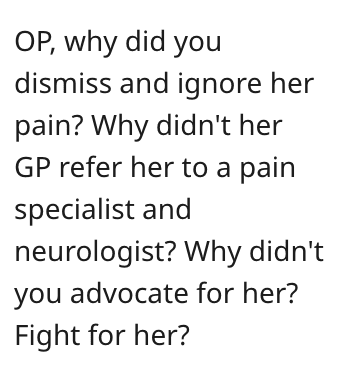 And this Reddit user said she’s an a**hole and said she sounds pretty dense.