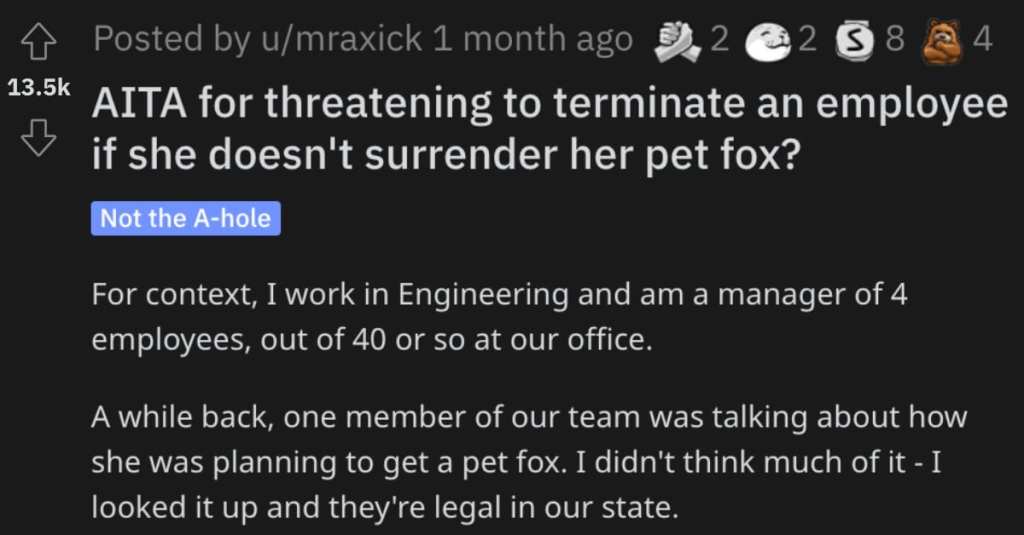 This Person Wants to Fire an Employee Because Her Pet Fox Is Causing Problems. Is She a Jerk?

But, variety is the spice of life, people!

And some people are…well…kind of weird.

Take a look at this story from Reddit and then we’ll see how folks responded.

AITA for threatening to terminate an employee if she doesn’t surrender her pet fox?

“For context, I work in Engineering and am a manager of 4 employees, out of 40 or so at our office.

A while back, one member of our team was talking about how she was planning to get a pet fox. I didn’t think much of it – I looked it up and they’re legal in our state.

She apparently got the fox about a month ago, and has been sharing pictures of it frequently with others (including keeping one on her desk), but we’ve also been noticing several problems.

Firstly – when she first got the fox, she was missing from work quite often. She was leaving early, taking 3-hour lunches, and arriving late almost every day.

She was aware of it and apologized, saying “sorry, I had to take [the fox] to a vet 1 hour away ” or “sorry I’m late, [the fox] peed on me this morning before work and I had to re-shower,” but it was happening nearly every day.

I talked to her about it, and she was embarrassed and said that she’ll do better, and to her credit she has been better about that for the past couple weeks.

But then the other issue – the bigger issue now – is the smell.

After she got the fox, I got a couple of complaints from others that she smelled bad. I only noticed it at times, but it was definitely there. Most notably on that day when she said she was late because she had to re-shower when the fox peed on her – I’m not sure if she actually showered, but it certainly didn’t smell like it.

But more recently, it’s become almost constant. When she walks into the room you can smell it. Even if she leaves her jacket on the desk when she goes out to lunch, the jacket smells like fox. And it was much worse this week than the week before.

I had an uncomfortable conversation with her about it a week ago and said it was becoming a problem, and she seemed very upset and promised that she’s showering right before work every day and washing her clothes frequently to make sure it’s not an issue. But again…over the past week it’s gotten much worse, not better.

So after talking with my supervisor for advice, on Friday I had another talk with her and told her the issues weren’t really improving despite her efforts and that something has to change, and it seems like it’s impossible for her to meet attendance and hygiene requirements while caring for a pet fox, and if this doesn’t change, we would have to consider firing her.

This made her very upset and she started crying and saying how heartless that was, and how I was unappreciative of everything she’d done over the past 2 years, and how would I like it if someone talked about my child like that

I do feel bad for making her that upset, but I wasn’t sure what else to do…I’m wondering if I handled it correctly.

Well, that’s a weird one…let’s take a look at how folks responded on Reddit.

This person made no bones about it: fox urine is BAD NEWS. 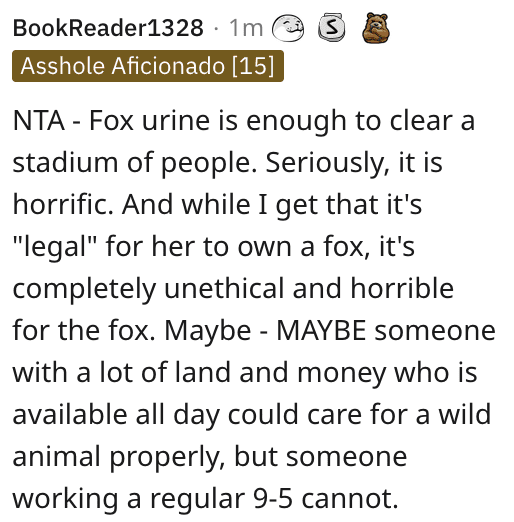 Another reader agreed and said you can smell fox urine even in wide-open areas. 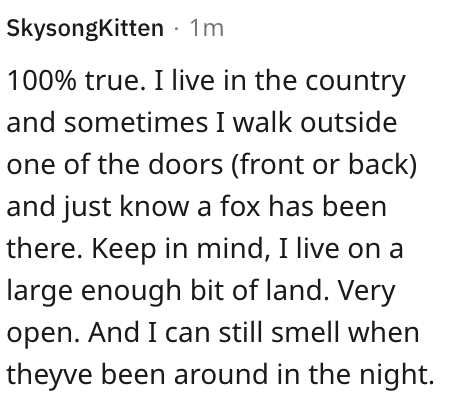 This individual said that the person who wrote the post is not the a**hole here and that the woman who bought the fox should have know what she was getting into. 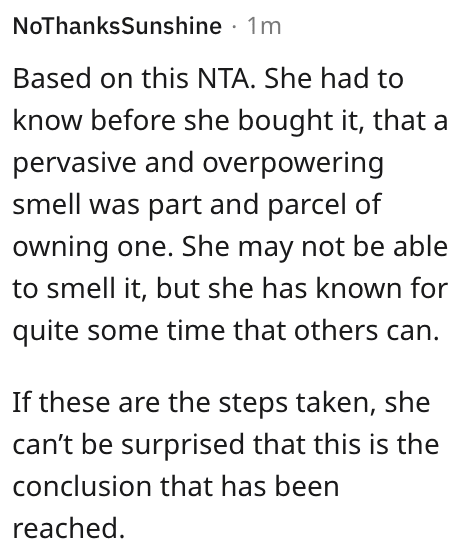 And finally, this reader said that foxes actually do not make good pets and that it’s just not a good idea overall. 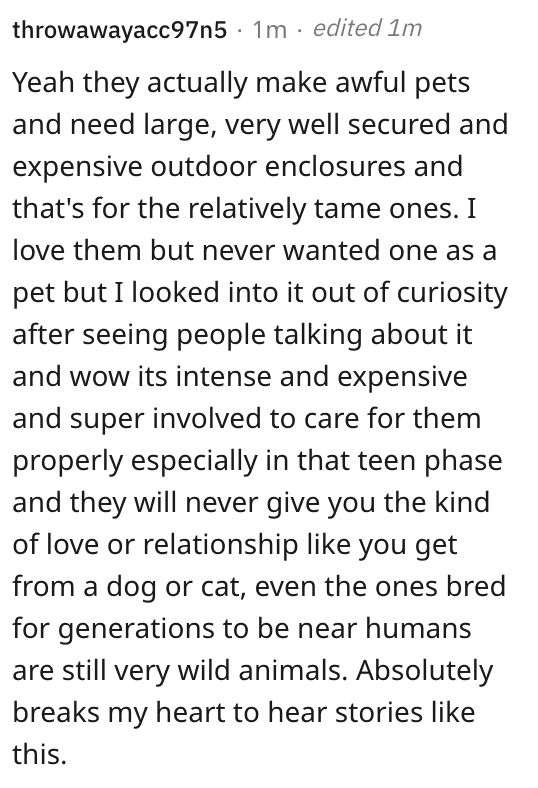 Now we want to hear your thoughts.

In the comments, tell us what you think of this story.