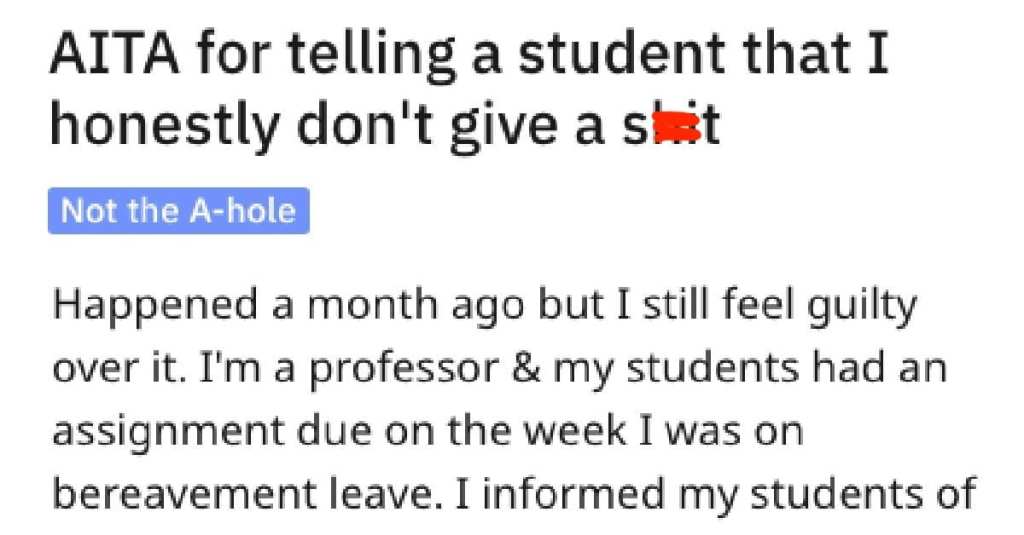 I used to think that being a college professor would be one of the best jobs in the world. You get a flexible schedule, you get to read about, publish, and teach about something you’re super into (you would have to be to get a Masters or PhD), and your students are old enough to be considered adults, so you wouldn’t have to deal with parents the way high school teachers do.

Then I learned about all of the politics that are involved with University teaching, and I’m kind of glad I petered out 80% of the way through my MA.

This professor is having an attack of a guilty conscience after following a school’s policy to not give deadline extensions on certain assignments without an excuse (and proof).

Happened a month ago but I still feel guilty over it. I’m a professor & my students had an assignment due on the week I was on bereavement leave. I informed my students of this, and let them know that I would be answering emails/ requests late, so it was better to inform the other professor in charge of the unit.

This assignment was given at the beginning of the semester & they were informed that no deadline extension would be provided unless there was an emergency (with proof) or requested in advance cause it was the school’s policy.

He had one student who emailed him timely, said her grandmother had passed, and was given the extension (pending proof).

One of student’s grandmother passed the day the assignment was due, so she emailed me & CCed the other lecturer. I happened to see the email in time, & I made a note in the system of her case & the deadline was extended with subsequent action pending the submission of proof.

Then another student emailed, citing “personal reasons,” but the professor did NOT see the email in time to stop him from getting an automatic fail because he was on bereavement leave (the students were informed ahead of time).

The student became upset and elevated the matter to both the professor’s superior and the dean, and he was forced into an online meeting while he was supposed to be grieving his brother’s death.

A day after the deadline, another student emailed me (only) saying that he couldn’t submit his assignment due to personal reasons & asked for a backdated extension. I didn’t see the email until a couple of days later. Because of the delay, he received an automatic fail. I emailed him back explaining what had happened but if he could provide proof of the emergency I may be able to find a solution where he won’t be failed (but won’t be given high marks).

He sent a really nasty reply & CCed the dean & my superior (the other lecturer in charge of the unit). I was dragged into an online meeting to sort this issue (while on my bereavement leave).

The conversation got a bit heated, with both parties saying things they probably shouldn’t have.

He called me a sh%tty professor because I was on leave the week the assignment was due & I was playing favourites cause I gave an extension to his classmate but not him & didn’t answer his email on time. He also said that I had no right to ask for proof because it was personal. I interrupted him to tell him off, saying that I honestly don’t give a shit about what excuses he has because I have proof that he acknowledged my emails.

I also said that I’m sorry that my brother’s death inconvenienced him but that it was his responsibility to keep track of dates & understand that certain things were out of my control because it’s the school’s policy, not mine. I also reminded him that I did say that I would try to not fail him but I couldn’t do that if I didn’t have proof.

I admit I was not as polite as I normally would be, & I was visibly upset by the time the Dean cut in.

The Dean excused the professor from the conversation, since he was on bereavement leave, saying the others would settle the matter. The prof found out later that the student came from a rough background and was already on academic probation, and now he’s feeling badly about the entire thing.

The Dean apologised to me first because he had no clue I was on bereavement leave (apparently my superior didn’t tell him for whatever reason). He then said I could excuse myself from the meeting cause he would settle this matter with my superior. I left the meeting & I found out later that the student was already on academic probation & would possibly be expelled cause he failed my unit (assignment was 60% of overall grade). He also came from a troubled background, which explained the personal reasons.

I really do care for my students, & knowing I may have contributed to him being expelled from the university does not sit well with me.

He did do his best to advocate on the student’s behalf, he said in an edit, but isn’t sure what will come of the whole thing.

I did write my superior a recommendation that he still be able to submit the assignment at a later date. My superior told me that because he was on academic probation, there would be another meeting to decide but they would take my suggestion into account.

The internet was ready to give their verdict on this one, though I honestly think everyone involved was a little bit right – and also a little bit wrong.

This fellow prof said the original poster wasn’t wrong, but that in the future he should work harder to be the bigger person as far as how he treats his students. 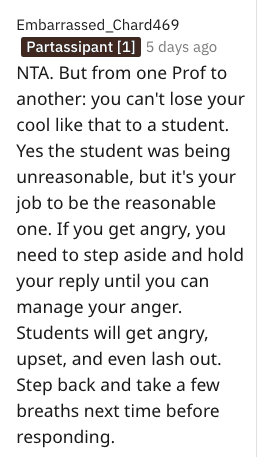 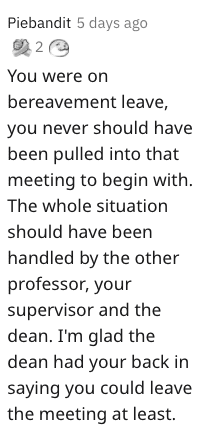 Everyone should have taken a few deep breaths before getting together.

A few people thought the professor’s tough love might have been just what this kid needed to keep things together in the future. 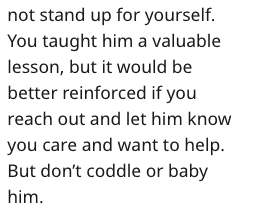 In the end, the professor is human and doing his best – and he’s done his best to correct things, too. 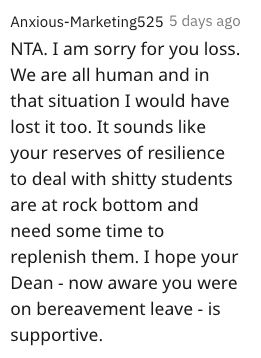 I think the very first response on this one was the best – the professor wasn’t wrong, but he could have handled it better.

Let’s hope everyone involved has learned a little something for the next time, eh?