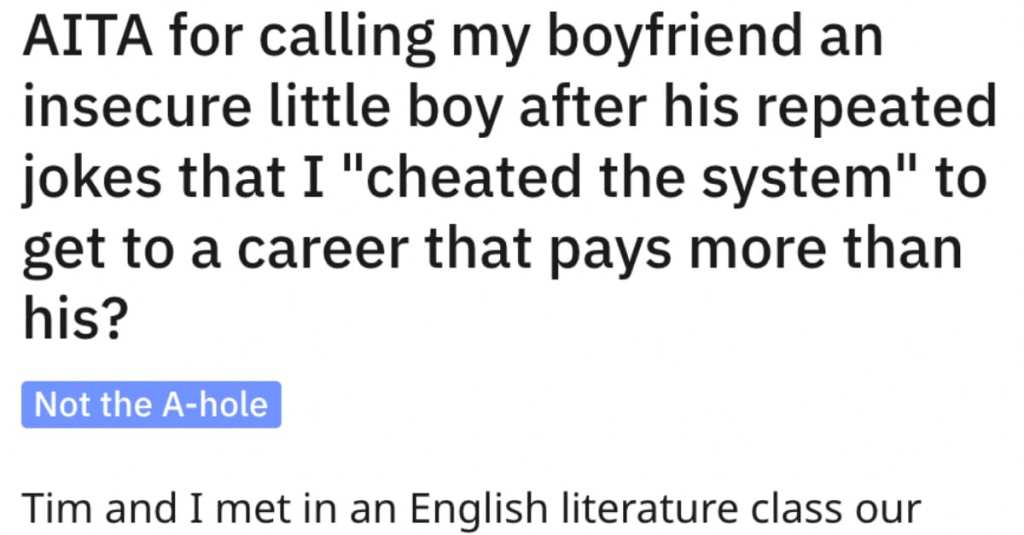 Relationships are tough, my friends, I’m not going to lie. It can seem impossible to find that other half, the one that matches up with us, challenges us, supports us, and loves us despite all of our many flaws.

I think that’s one reason it can be hard to see right away – or admit, perhaps – when the person who initially seemed to be a good fit keeps showing edges that don’t match up at all.

Things snuck up slowly on this woman, who earned a liberal arts degree to her boyfriend Tim’s IT diploma. They’ve been together and happy, while she searched for a career path that satisfied her and him climbing the IT ladder.

Tim and I met in an English literature class our junior year of college, and we’ve been together the ten years since. While he ended up going into IT, I stayed in the liberal arts track and ended up doing non-profit work after college when I realized I didn’t actually want to be a schoolteacher. Just to say that we always assumed he’d out-earn me by a considerable margin, though when he made more I always insisted we split things evenly to avoid potential resentment down the road.

Now, she’s bounced around long enough to find not only a job she loves, but one that pays even more than he makes at his cyber security job.

I’ve had sort of a non-linear career path, but ended up switching to the corporate world. To make a long story short, my liberal arts degree and time doing non-profit work gave me a lot of skills that enable me to really excel professionally in some more niche areas. I recently started a new job as a consultant, making way more than I’d ever anticipated.

When I got the offer, I told Tim that the pay was “amazing”, but he didn’t ask about the actual amount and I didn’t want to be braggy about it, especially since I was fairly sure it was above his current income.

He’s just thought to realize that she’s making quite a bit of cash, and is making comments that show it’s obviously bothering him that her English lit degree has managed to snag her an awesome job.

He’s telling her she “cheated the system” to make himself feel better (I guess).

Well we just put in an application for a new place, and in the process of having to submit our paystubs it’s become obvious that I make roughly 30% more than he does now. I expected him to think that was cool, since he’s a feminist and has always been super supportive of my career. But instead he’s started to make increasingly harsh jabs about how I “cheated the system” to get where I am, that no English lit major makes more than a cyber security professional without cheating somehow.

He makes three ridiculous points about her “cheating,” two of which hinge on her just “being female.”

Also, I don’t think it’s called nepotism when your sorority sister recommends you for a job.

His major point is that I got my first job out of nepotism, which set me up to “trample” more qualified people who didn’t have the same advantages. It’s true that I got my first post-college job after being referred by a sorority sister, but it was for non-profit work making 22k/yr, not exactly at somebody’s daddy’s firm.

He also points out that at my first corporate job, I snagged a big promotion after volunteering to take on starting up the company’s diversity/equity/inclusion program, and I’ll admit that were I a white man, it’s highly unlikely I would have been able to be the face of the eventually high-profile diversity program.

Tim also notes that I was awarded a small college scholarship for being a “promising female writer”, when no such scholarship existed for males.

Except she didn’t cheat the system, and his ongoing “jokes” about not only her, but other women who are getting what they deserve (in a good way), pushed her over the edge and she’s wondering if she’s gone too far.

But all that said…I still don’t feel like I cheated the system, and it makes me angry to listen to him “joke” about it, especially since I grew up blue collar and worked fulltime while going to school fulltime to afford my degree.

I reached a breaking point yesterday when he made a crack about how the new/first woman on his team is an obvious diversity hire. I told him that his jokes about women cheating the system to get ahead aren’t funny or “guy-talk ribbing” as he says, they make him sound like an insecure little boy. He told me I was being a naïve Karen and we haven’t really talked since yesterday.

Did I go too far?

This first person really breaks down all the reasons she’s way too good for him, and I am here for it. 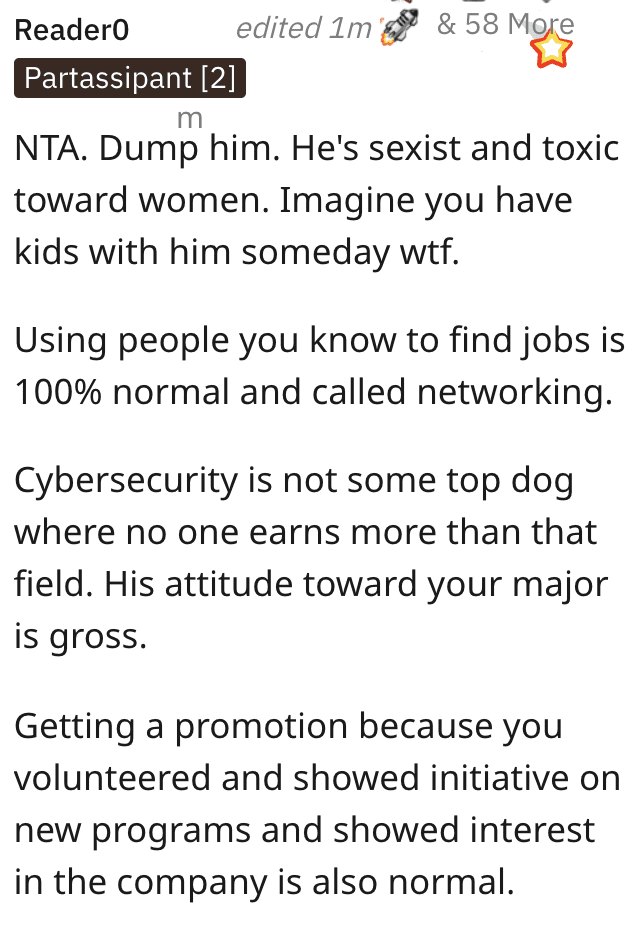 Toxic seems to be the word of the day. 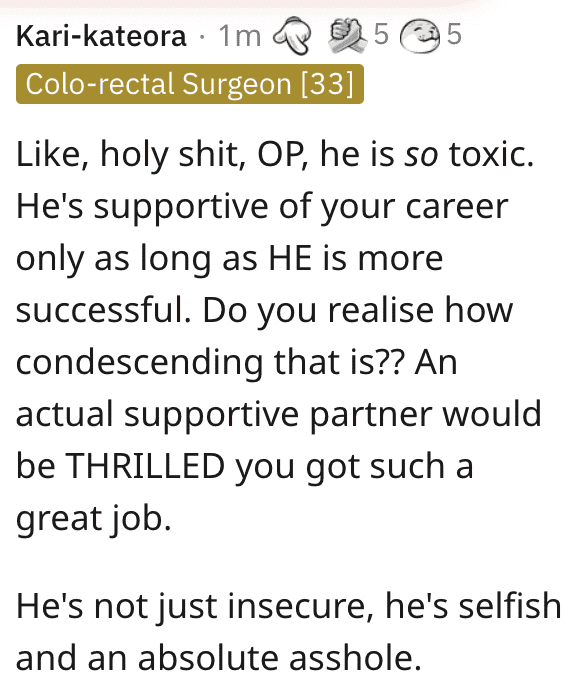 She needs to go find someone who is actually a feminist and who isn’t intimidated by her confidence and success. 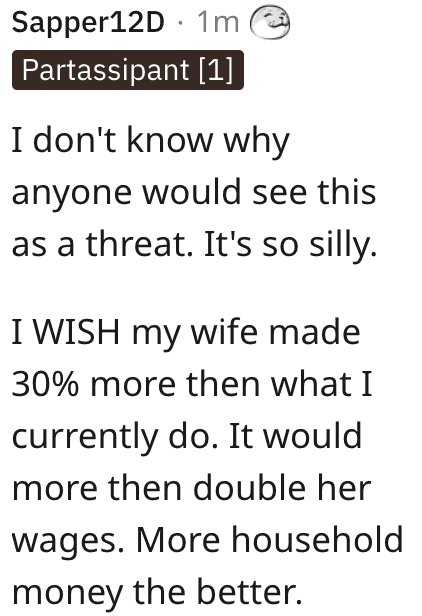 It’s so seriously his loss and if he’s smart at all he’s going to regret acting this way some day. 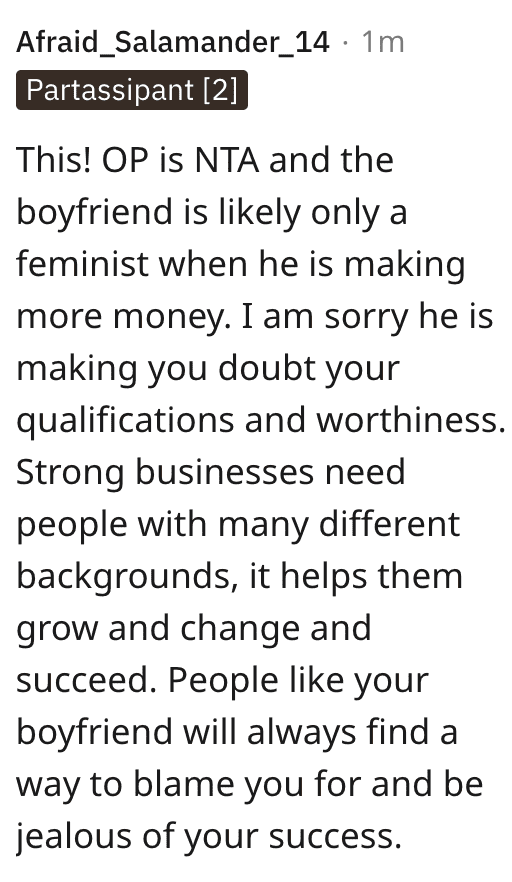 She hit the nail on the head, actually, calling Tim insecure. 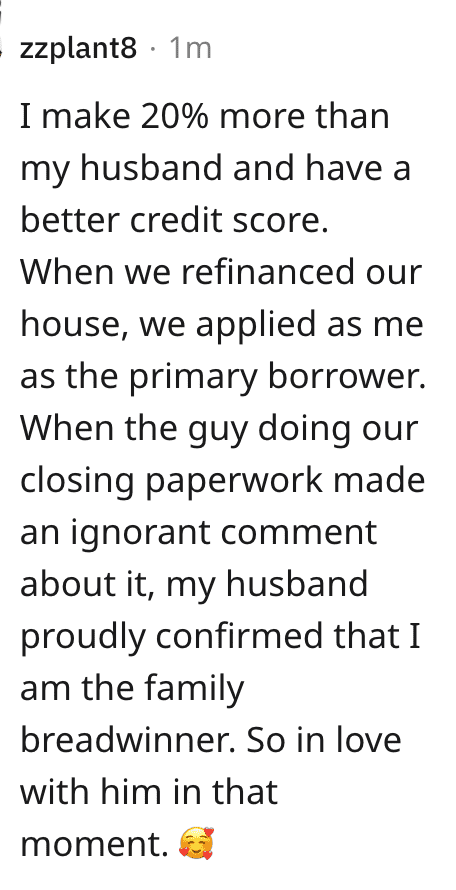 I hope this woman read all of these comments, printed them out, and left them on the coffee table when she packed up and left.

Too harsh? Tell me why you think so in the comments!