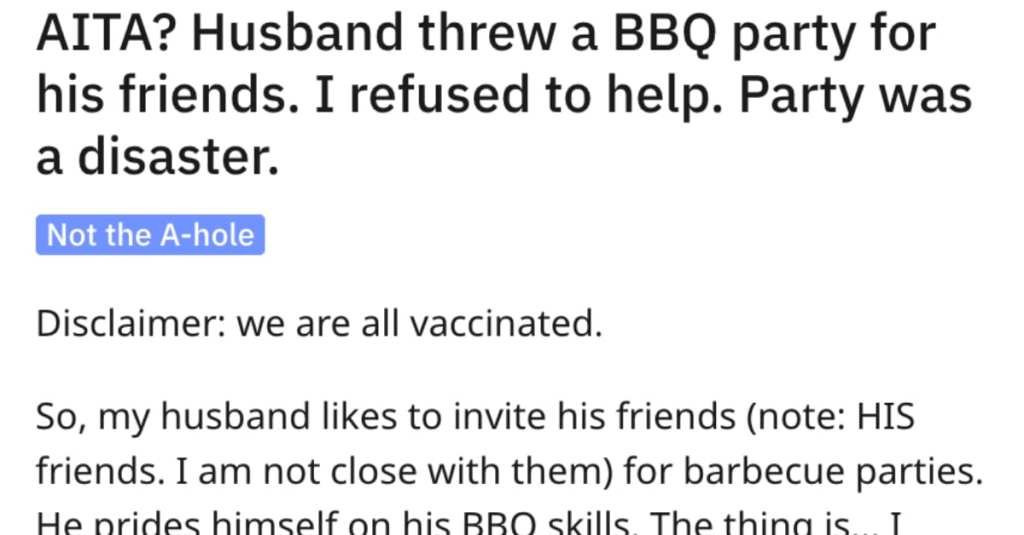 Was This Woman Wrong for Refusing to Help Her Husband Throw a BBQ for His Friends?

Marriages can be tough work, but most women I know agree (and most men, too, if they’re brave enough to admit it) think that the bulk of the home and family work fall on their shoulders. We take care of the kids, we make sure the calls and appointments are made, the groceries are shopped, the meals are planned, et al – and that’s just on a normal day.

If people are coming over, our duties increase ten-fold, and very often, we do it without being asked.

In this case, that sense of duty came home to roost when OP’s husband announced that he would be having his work friends over for a BBQ – no other women, no spouses, etc, so just his friends.

His wife normally handles a good bit of the hosting duties – everything except actually grilling the food, to be honest, but this time she didn’t want to do it.

So, my husband likes to invite his friends (note: HIS friends. I am not close with them) for barbecue parties. He prides himself on his BBQ skills. The thing is… I always end up doing everything! He buys and preps the meat and then grills and serves it (and collects praise for his BBQ skills). I have to buy drinks, get out enough dishes, clean up the patio/deck (non native speaker, idk which one to use). I prepare the sides and veggies, I refill the drinks and take away dishes (we don’t use paper plates or plastic cups since I find it wasteful) so as to keep the main table tidy. It’s just nonstop work for me.

He said he would handle it which, I feel like everyone involved should have known, was a recipe for disaster.

He just told me last week that he invited his friends for Saturday (so yesterday). Just announced it, didn’t ask me. I said well okay, do I know anyone? Nope, those are his work mates and they won’t be bringing their spouses. My husband called it a “guys’ night”. I said okay then, guys’ night, well enjoy yourselves, I will be in my craft room working on some of my projects and drinking wine. He said he will handle it.

He did not, of course, handle it, and the place was a mess when his guests arrived.

Spoiler alert, he did not handle it. He got the meat alright, but just ignored any other preparation and I was just so sick and tired of being taken for granted (he never -asks- me for help, I just do stuff…) so I didn’t do anything. The patio was a mess, the upholstery of the garden furniture was all messy from our dogs, the table wasn’t wiped down, there was stuff lying all around. His friends arrived, I welcomed them and then excused myself to my crafts room, put some music on and worked. Cue the messages.

He began messaging her with all kinds of questions he didn’t know the answers to because he clearly never does any of the work.

They ended up sorting it out (mostly) on their own.

He started asking for stuff, like where are the plates (we only keep a small set in the kitchen, the rest is in the basement), where are the cups, why isn’t the beer chilled, where is the non alcoholic beer – did I not buy it? Where are the sides? I just replied that he said he would handle it all himself. (EDIT: this is also where I fee I might have been the asshole, it would have taken me just minutes to at least tell him where the stuff is).

I checked on the guys a few hours later and it was a disaster. Table all cluttered, they ordered some takeout as sides, there weren’t enough dishes and silverware, someone had to go drive for drinks.

The following day her husband was upset and felt that SHE made their family look bad in front of his friends from work. When she told him that he made himself look that way, he went for a run to cool off.

On Sunday (today) he was all grumpy and actually told me that he is disappointed that I didn’t pull my weight and that I made our family look sloppy and bad. I told him that I am not his little housewife and that he is a big guy and if he embarrassed himself in front of his work mates, that’s all on him. And that I’m glad that he can see at least a tiny bit of work that I do around the house. He got upset and went for a run to let off some steam.

The place is a mess and she’s refusing to help clean any of it up, and now they both have things to think about in their marriage going forward.

Oh and the patio is full of dishes, he didn’t even clean the grill. I’m not touching anything.

They think she’s a hero, honestly. 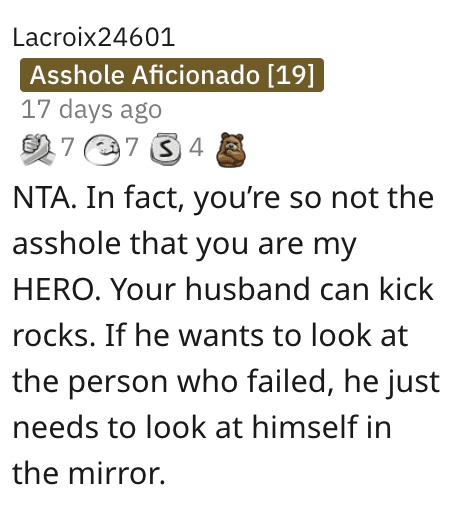 They also let OP know she’s so not alone.

It certainly sounds like they both have a lot to think about, right?

Why do they pretend to be stupid? 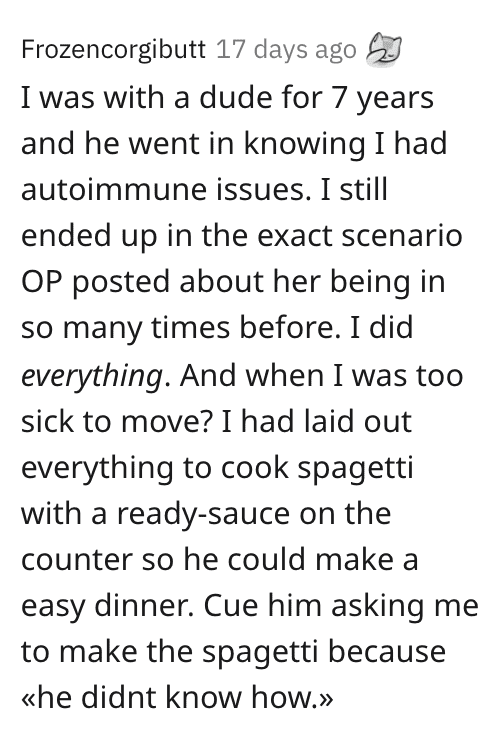 Basically, we’re all on her side. 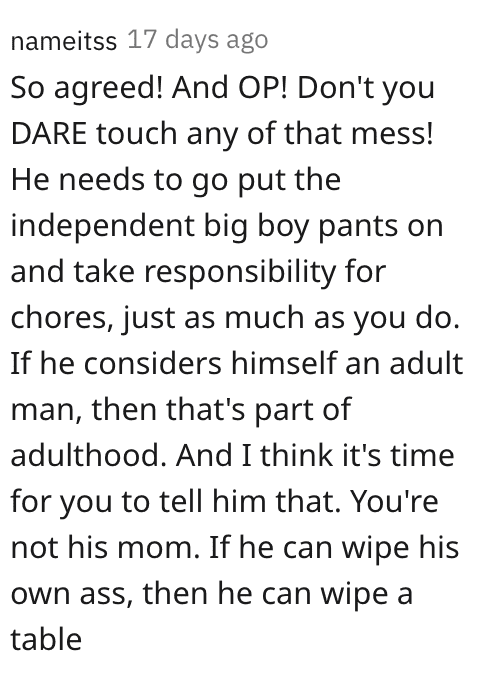 Men need to stop getting away with the bare minimum, don’t you think?

What advice would you have for OP? Drop it in the comments!