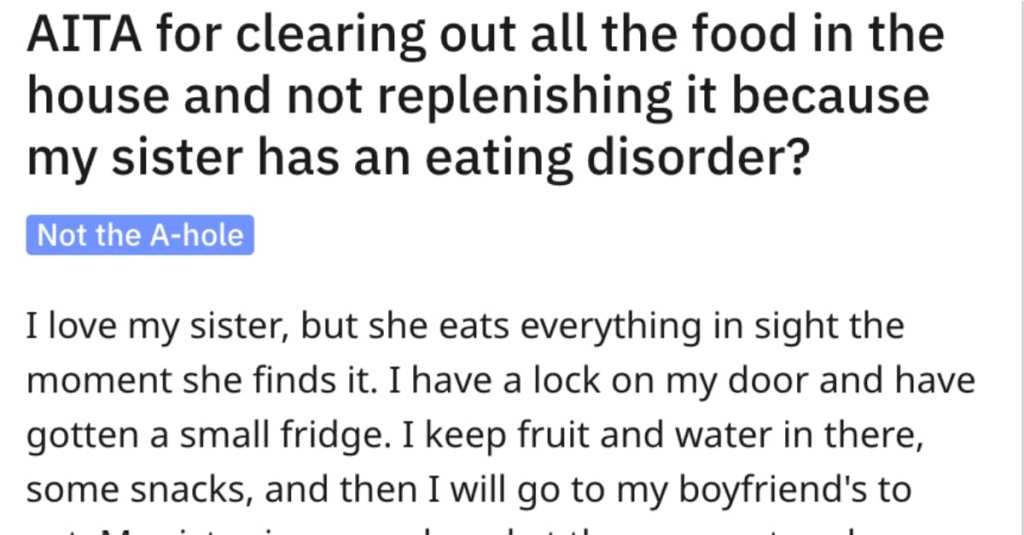 Living with family, especially when they have mental health issues, can be extremely challenging. We want the best for the people we love, but sometimes it can be hard to know what that is – and when different family members have different takes on how best to help, things can get complicated fast.

In this poor woman’s case, she’s living in her childhood home with her sister, who has a significant eating disorder that’s affecting everyone in her life.

OP has managed the situation by keeping a small fridge and snacks in her locked bedroom and eating meals at work or with her boyfriend. Their parents bring her sister (and sometimes her) meals, and those are all gone within minutes.

I love my sister, but she eats everything in sight the moment she finds it. I have a lock on my door and have gotten a small fridge. I keep fruit and water in there, some snacks, and then I will go to my boyfriend’s to eat. My sister is unemployed at the moment and my parents bring her meals (about 1200 calories per meal) and she will scarf it down. If they leave something for me, she eats that as well.

She’s tried talking to her sister, begging her to get help, keeping groceries in the fridge, etc, and nothing has worked. Her sister is caught in a binge/purge cycle that never ends, and all their parents do is enable her.

She once got so hungry she ate parmesan cheese from a shake bottle. As much as I love my sister, she has eaten about $400 in groceries this month alone. I tried so hard to refill it, talk it out with her, and she just binges, purges, binges more. She couldn’t even be measured on my scale, which goes up to 450 pounds.

OP says she’s done buying food for her sister, who obviously has a problem.

Their parents are going out of town, and everyone is wondering what the sister is going to eat after she inevitably eats everything her parents leave in the first couple of days.

I told her that I was done feeding her. She can talk to our parents and figure it out. I was done. I have the lock-in in my bedroom, which has always been there, and I eat with my boyfriend. I eat at work. But there is nothing but bottled water in the fridge for her right now.

My parents are going out of town next week and have agreed to buy her food for the week. I told them that if she eats it all, she is going to be hungry the rest of the days.

OP is the only one pushing for treatment, and is about at the end of her rope. She’s going to kill herself without help, and OP is ready to move out and in with her boyfriend to remove herself from having to watch it all go down.

I have been very clear with them that she needs to go to some kind of therapy/clinic. There has to be something to be done for someone with her issues. But she ignores it. It is at the point where she cannot get into my Corolla to drive anywhere because she is too big.

The house we live in is my childhood home and I lived there with Ashley because she is my sister. But now it’s to the point where my boyfriend has said to just move in with him. Which would mean my parents would have to watch her because her health is so bad she can’t do a lot of things without help.

She’s wondering if she’s wrong to walk out, or to stop feeding her sister in the first place, so let’s see what sort of advice Reddit has, hmm?

I really don’t think there’s any arguing against this point. 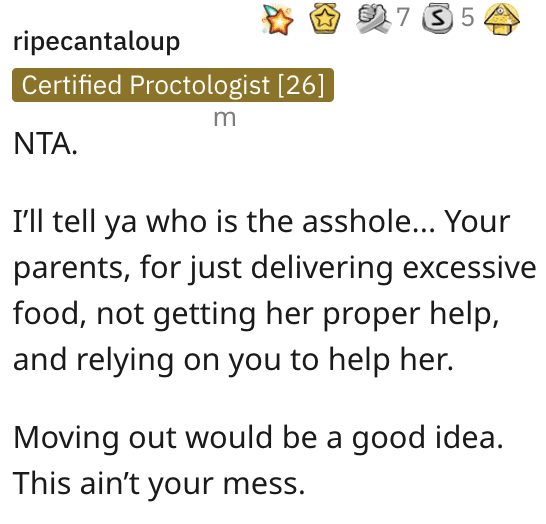 It’s sad, but you can’t help people who aren’t willing to help themselves. 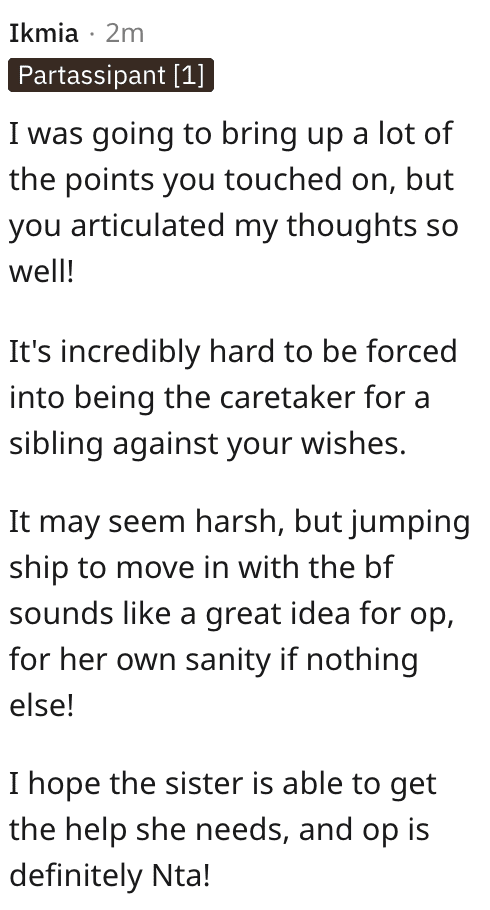 Everyone needs to be on board, otherwise nothing is going to change. 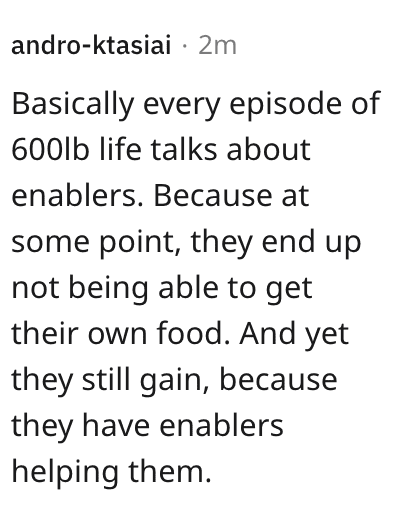 Therapy sounds like the obvious answer, and I really hope for this family’s sake that the sister makes her way there, and soon.

Maybe the parents should stay out of town a bit longer.

I feel for the sisters here, and want to smack the parents up the head. I hope the story has a happy ending, but it’s not looking like it right now.

What do you think OP should do? Is it her responsibility? Let’s hash it out in the comments!