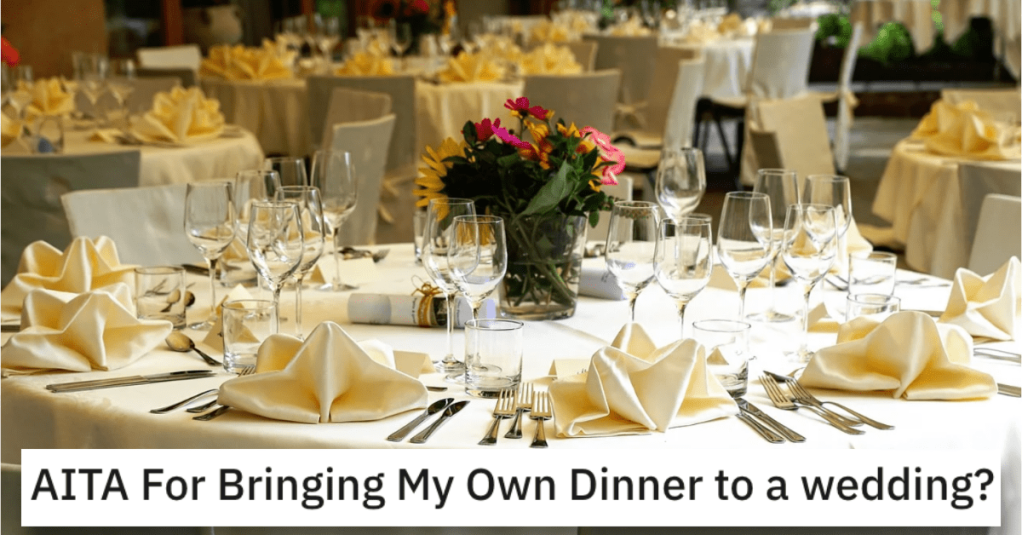 Was This Woman Wrong to Bring Her Own Dinner to a Wedding? Here’s What People Said.

I can’t say I’ve ever heard this one before…

Bringing your own dinner to a wedding?

That’s a brand new one for me!

You get to read all kinds of real stories that people want advice about.

Let’s take a look at what happened here…

AITA For Bringing My Own Dinner to a wedding?

My cousin (k) had her wedding a couple weeks ago and they did not have any menu items that I would be able to eat except a couple of the appetizers. Even then, I am a little uncomfortable because they chose buffet style for the side dishes and catering creates a lot of opportunity for cross contamination.

I understand what it is like leading up to a wedding and I received no response to my message, though it was on fb and I knew she had opened it. I decided I would just put together a little lunchbox and leave it in the car so when I started to get hungry I could just go grab a snack and come back in.

Well, the reception came and all was well. Then dinner time came, and K came up to me and asked why I leaving the venue. I told her that I just had to get some food in my belly and that I would be right back to finish celebrating. She got an appalled look on her face and asked why I would bring food to a wedding I knew would have some of the best.

I let her know about the restrictions and reminded her about the message. She said “I just figured you were being dramatic and someone in the family would get you under control. Guess nobody could.” My jaw hit the floor. I wish that my restrictions could be casually broken, but unfortunately I get quite ill if I break the food boundary. It is well known within my family that this is true. I’ve ruined a holiday or two by accidentally eating contaminated food.

Anyway, I really didn’t know how to respond so I just walked out to the car and had my food with the company of the car radio. I am the queen of being hangry so I hoped that getting fed would help me get a better grip on the situation but I was still shaky mad. I came back in prepared to sit quietly and get through the rest of the night without too much more to say but my aunt and uncle came to the table and told me how much I hurt k’s feelings by bringing my own food.

I explained (although I still feel a certain sort of way about having to explain) the restrictions again and told them I tried to be as polite as humanly possible by reaching out beforehand and leaving my snacks out of sight of the reception guests.

They told me it gave the whole wedding a bad look and if it was really that big of a deal then I needed to eat beforehand. Nobody else has really weighed in and at this point I really don’t know if I was in the wrong.

Now check out what Reddit users said about this story.

One reader said that this woman is NTA. 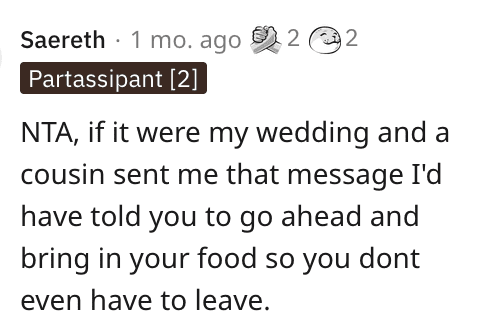 And this individual said the cousin is responsible for making a scene, not the OP. 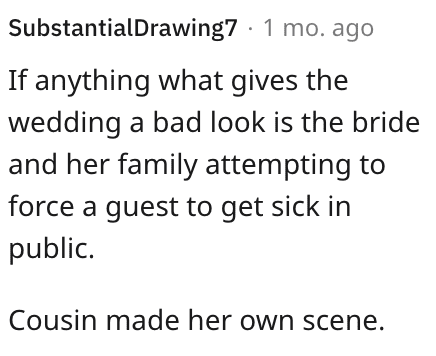 This Reddit user made a good point and could relate to this woman’s story. 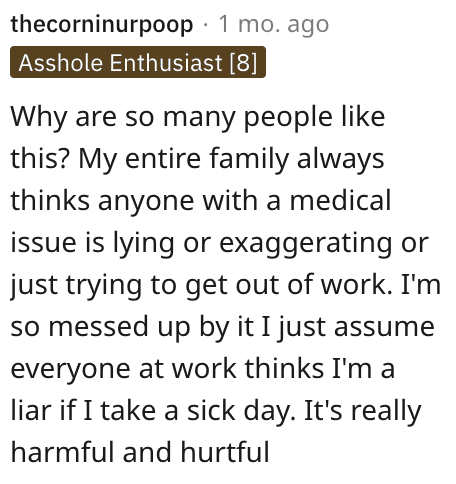