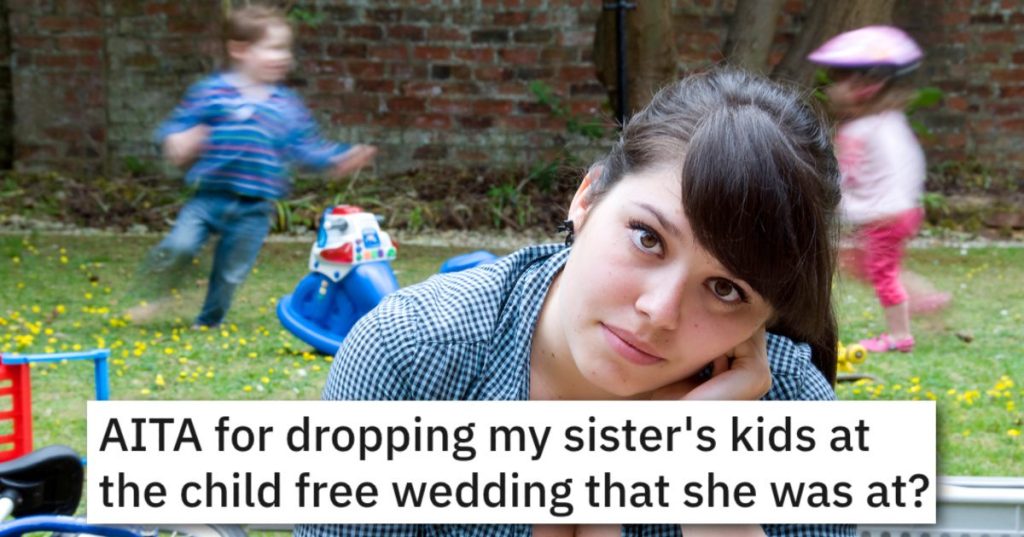 Was This Woman Wrong To Cut Off Her Sister’s Free Babysitting Without Warning?

Everyone who has children needs help and support, and sometimes even a break to be able to come back to their kids as their best selves. The proverbial village, if you will.

That said, I think most of us arrange that sort of thing in advance, and also do our best not to take advantage of those willing to help out when they can.

OP’s sister has three young children and often “dumps” them on her without warning, despite the fact that OP herself is in medical school and has many demands on her time.

To make a long story short, I (f25) am a medical student. My free time is very limited and I have lots and lots of commitments.

My sister (f33) has 3 kids all under 10 and she often expects me to babysit for her which isn’t the main problem, but she drops them off at random times with very short notice or no notice at all!.

In this case, the sister said she was coming over with the kids (didn’t ask) and then sped off before OP could tell her that she needed to study for a big upcoming exam.

The other day, She called saying she was on her way to drop the kids off at my place, because she was attending her friend’s child-free wedding and she couldn’t take the kids with her.

I had a huge argument with her on the phone because I had to study for my upcoming exam but next thing I knew, the kids were at my doorstep and she was already back in the car and then drove off with her husband.

After thinking about it for a few minutes OP got dressed and took the kids to the wedding their parents were attending, despite it being a child-free event.

I was so pissed I couldn’t handle it. I decided to get dressed 30 mins later and take the kids right where their mom and dad were. I drove them to the wedding which was at her friend’s house and had them go in.

The men there tried to stop the kids til my sister and her husband came rushing. My sister was shocked. She started shouting after me but I quickly got into the car and drove off.

Her sister and even her husband are angry, saying that OP embarrassed them and ruined the wedding, that she should have sucked it up, etc.

I went home and she started calling me. After she realized I wasn’t going to pick up, she sent few texts calling me unhinged and a “f**king b*$” for putting her in this situation and embarrassing her infront of her friends.

She mentioned that by bringing the kids to the child free wedding I disrespected her friend which affected their relationship amd caused her and her husband to go home and miss out on tje rest of the wedding.

Her husband called later and I picked up thinking he’d speak to me rationally like he always does but he scolded me saying that it wouldn’t hurt if I kept the kids for few hours, and then expressed how disappointed he was and how selfish and petty I was to do this to my sister and her kids.

Now OP is wondering if maybe they aren’t right, and she’s the one who was wrong in this situation.

Now I’m thinking I should’ve sucked it up for few hours. AITA?

Reddit’s got some advice for her incoming!

The top comment reassures OP that her sister and brother-in-law are trying to blame her for their own error in judgement. 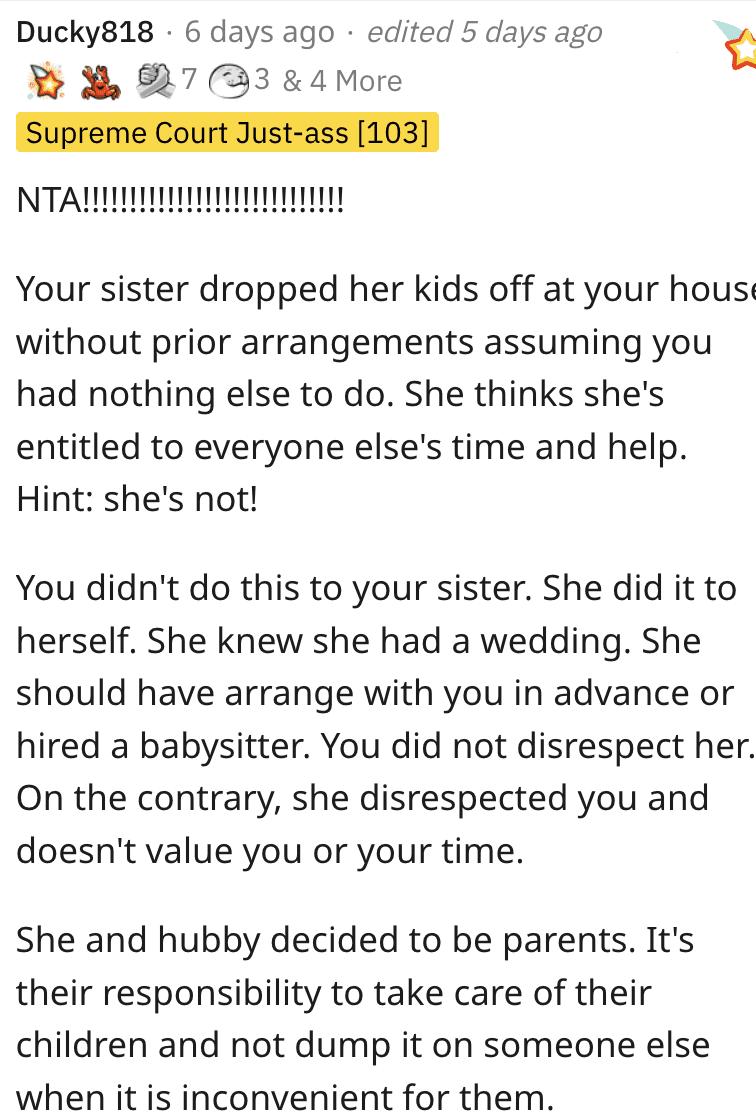 This person says not only is OP not wrong here, but that she should outright refuse to babysit in the future, too. 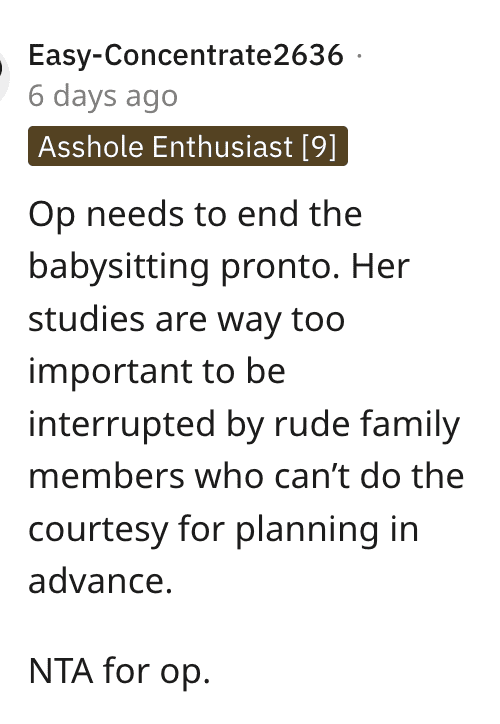 There was no reason for OP’s sister to wait until the last minute to make arrangements here. 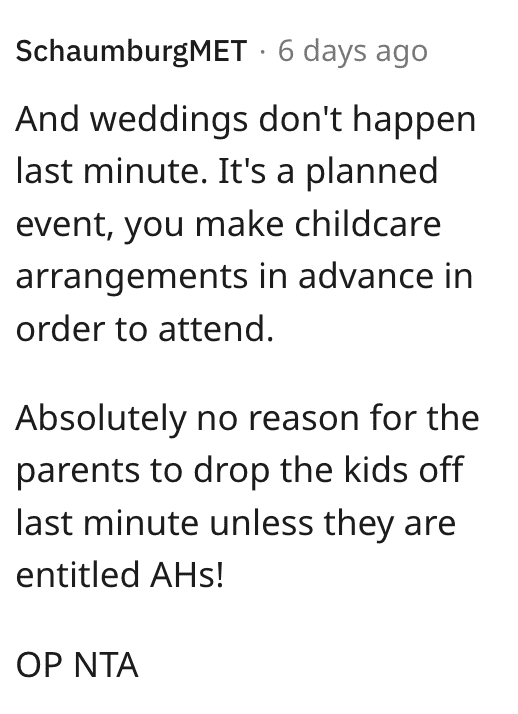 It definitely sucks for the kids, but they’re not OP’s kids. 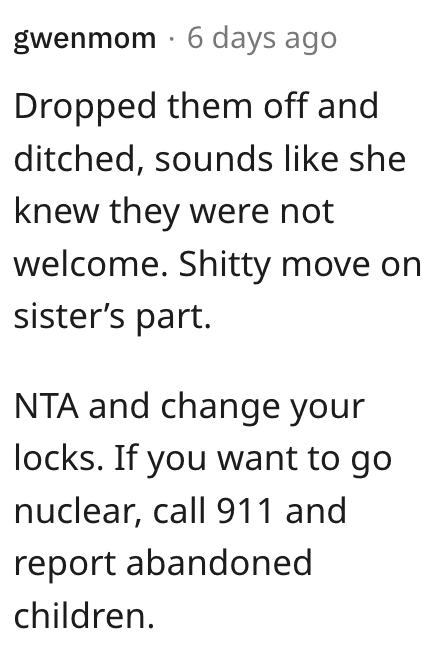 Sometimes public shaming is the only sort that gets through.

Just when I think people can’t surprise me anymore I read something like this. The gall!

Would you have watched the kids one last time or done something similar to OP? Let us know in the comments!