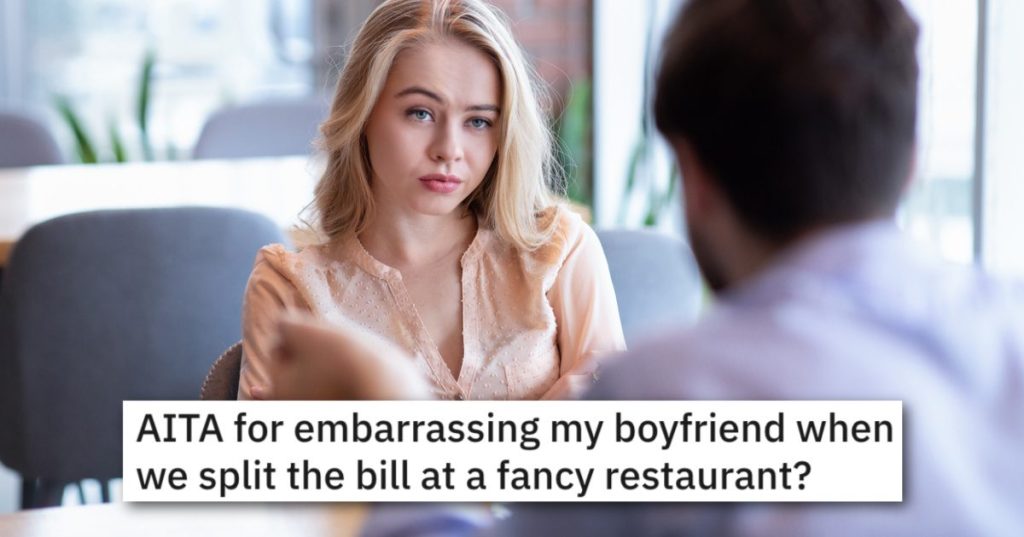 Was This Woman Wrong To Insist On Splitting The Bill On A Date?

If you’ve spent any time in a relationship, you know two things for sure – they’re not as easy as you expected them to be as a starry-eyed teenager, and you often can’t see all of the issues you’re having from the inside.

For this woman, who started dating her boyfriend of three years when she was just 22, receiving feedback on a rough patch has turned into a watershed moment.

I’m 25, my boyfriend is 35, and we have been together for almost exactly three years. In a funny coincidence, both of our birthdays and our anniversary (the day we met) all happen in the same week.

We discussed budget in advance, and we agreed that we would split the cost of the dinner. It was a set tasting menu so we knew the exact price ahead of time.

Her birthday was a flop, from him trying to multitask by working while they were out to his “gift” of a fancy dessert containing an ingredient she was allergic to.

The crap topping on the cake was him leaving to go hang out with his friends for the night instead of spending time with her.

My birthday did not go well. My boyfriend lied to me about taking the day off work and kept disappearing to the bathroom to answer emails and make calls, when we were at a museum together. (I didn’t ask or expect him to take the day off – I’d have been fine doing something in the evening.)

Then for my present, he gave me a pastry made of a specific ingredient that I’m allergic to, so I couldn’t eat it. Then he left at 8pm because he wanted to watch a football game, so I ended up spending my birthday night alone.

The next day, I told him I felt like he’d given zero thought to my birthday and made me feel like I was a burden on him. He just said he’d done his best and I need to learn to be grateful when other people ‘try.’

His birthday, on the other hand, was great because she put a ton of effort into making it that way.

His birthday went off without any issue. I had specialty food and wine shipped in from his home country, got his favourite childhood recipes from his grandmother, and spent several days preparing a dinner built around his preferences and dietary requirements. He loved it.

Then came their anniversary dinner. Even though they’d agreed ahead of time to split the bill, OP was hoping her boyfriend would offer to pick up the tab as a way of apologizing for her whole birthday mess.

He didn’t, but wanted to pay the entire bill to save face anyway and just have her pay him back later, and that was the last straw for OP.

Then came our anniversary. We agreed in advance to split the bill, but by then I was hoping that he’d offer to cover it – not because of the money, but as a gesture of apology for how my birthday went. At the end of dinner, I asked if he still wanted to split.

He replied, “Yeah but it would look weird if we asked for separate checks, since this is a nice place. So I’ll pay here and you can transfer me the money afterwards.”

She told the waitress they were splitting the bill and then proceeded to pay nearly 70% of it, which angered her boyfriend, who thought she didn’t have a right to be angry since they had agreed ahead of time about budget and splitting the bill.

I honestly saw red. When the waitress came over with the bill, I said, “We’ll actually be splitting.” She asked how we wanted to split,and I said I’d pay for the wine and my food. So in total, I paid for about 70% of the bill. My boyfriend just shrugged and paid for the remaining amount.

As soon as we left, he said I humiliated him and acted like a spoiled brat and he “couldn’t change the past”, and I need to learn to move on when I’m annoyed.

I said my issue wasn’t about changing the past, but 1) he hadn’t even properly apologised for my birthday or tried to make up for it in any way, and 2) he cared more about the restaurant staff thinking that he was a big spender treating me to a fancy dinner, when I’d actually be paying for half of the meal.

He said I’m the asshole because we had agreed to split the bill, so I had no right to be annoyed about it.

Does she have the right to be upset or not? Reddit has some thoughts, and I don’t think her boyfriend is going to like them…

I mean turnabout is fair play. 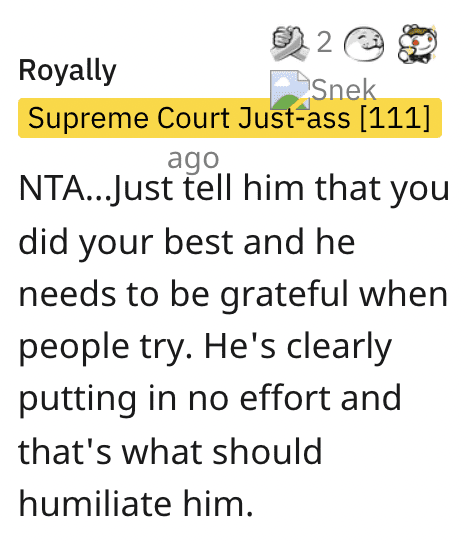 This person has written a thesis on why OP is not only not wrong, but about how she needs out of this relationship ASAP. (3) 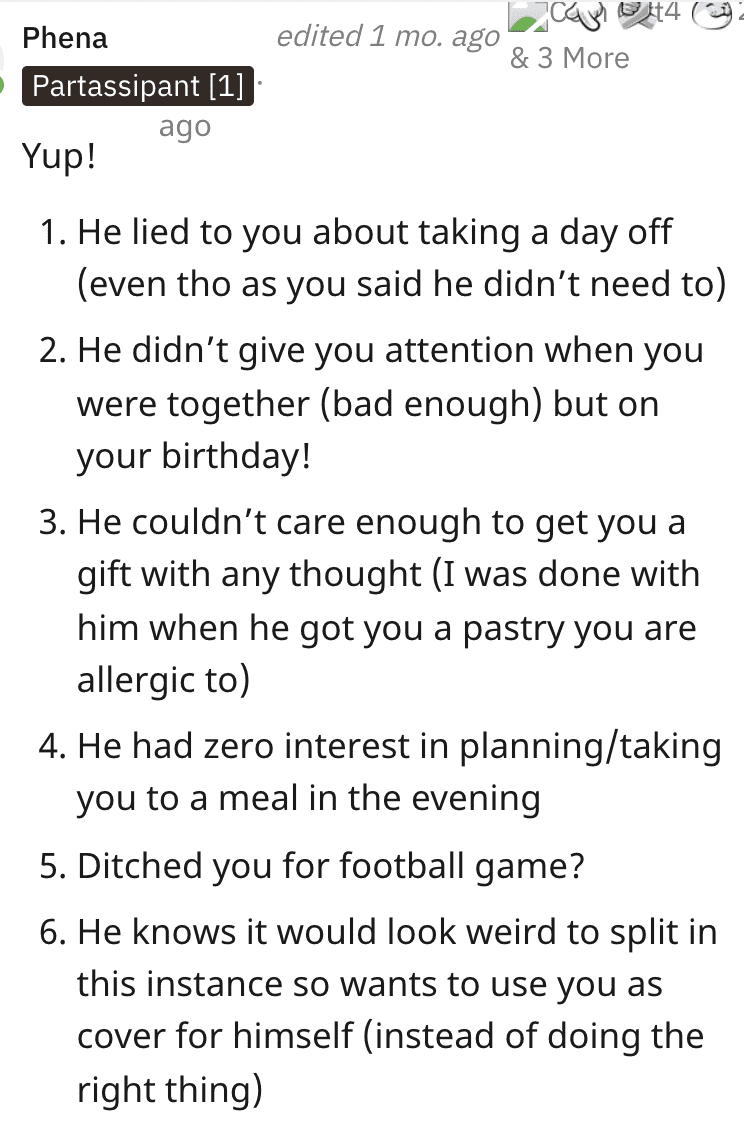 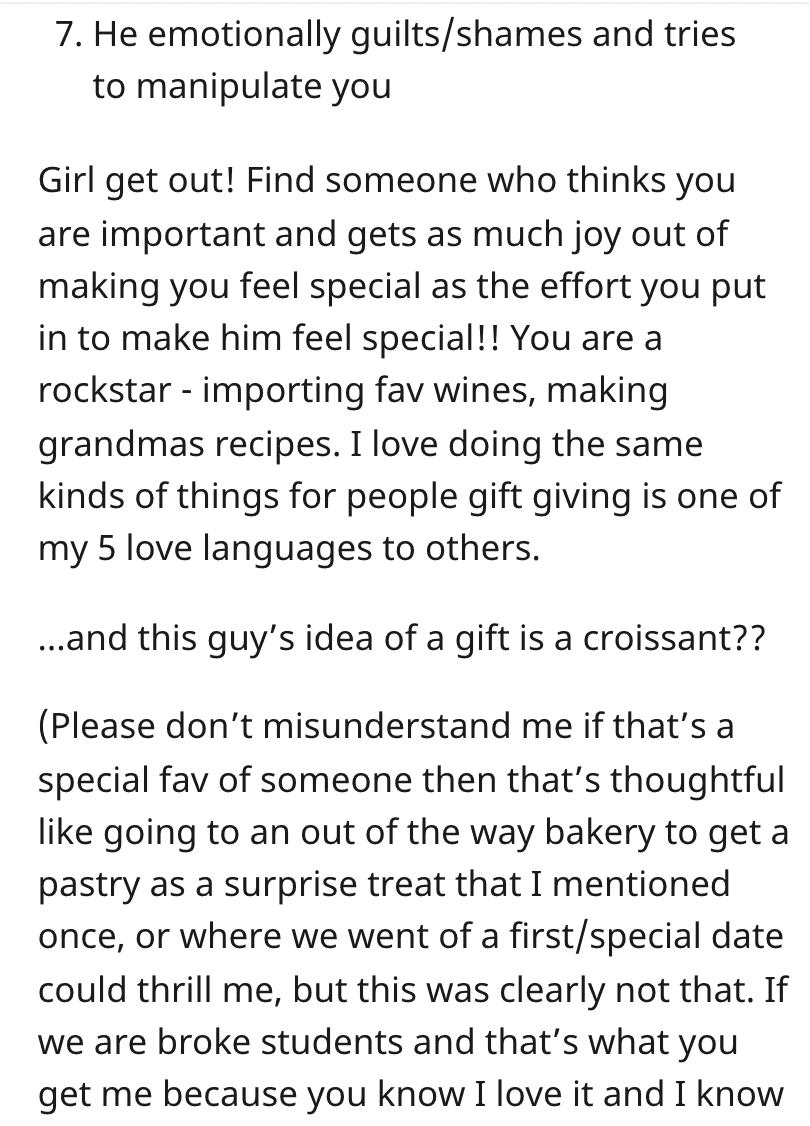 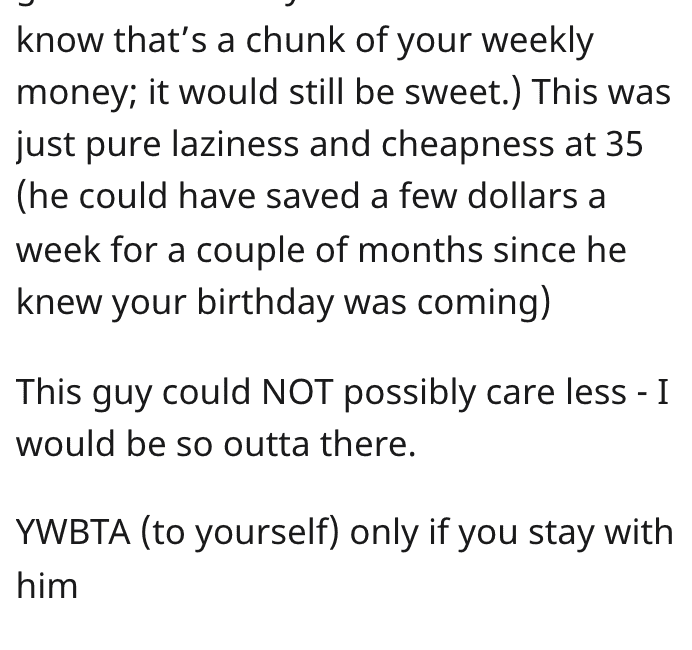 And yet this person still found something to add. 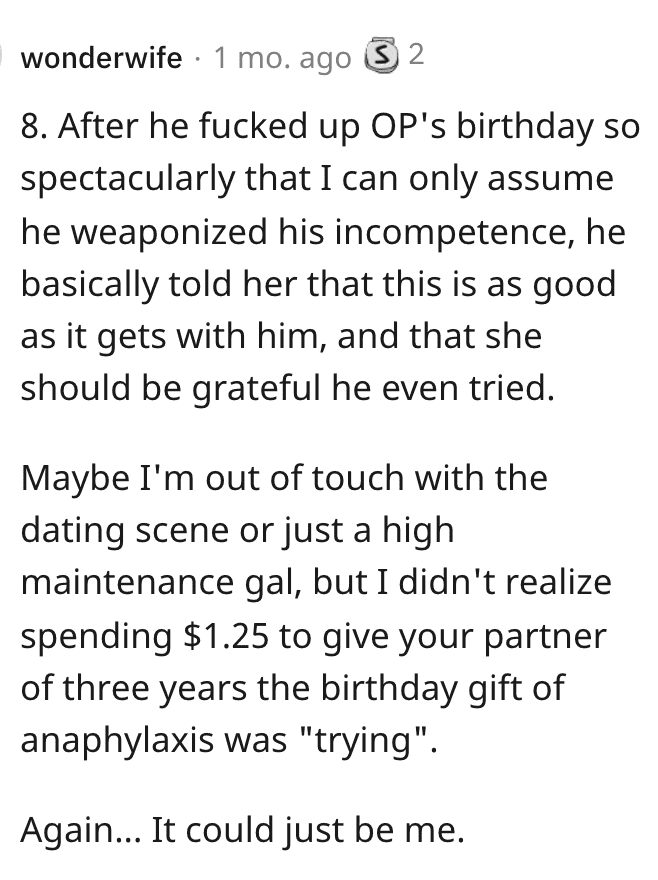 Pretty much everyone thinks she can do better. 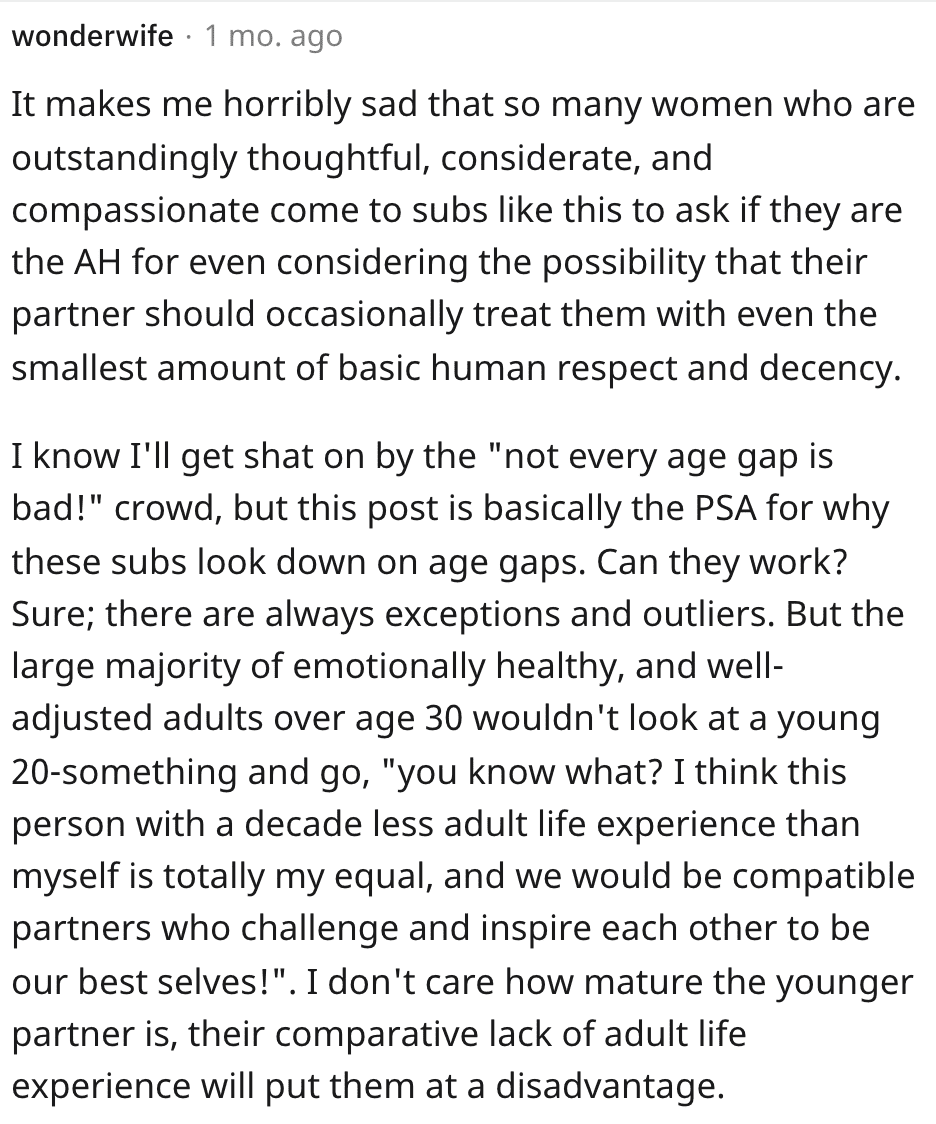 It definitely sounds as if they are not on the same page. 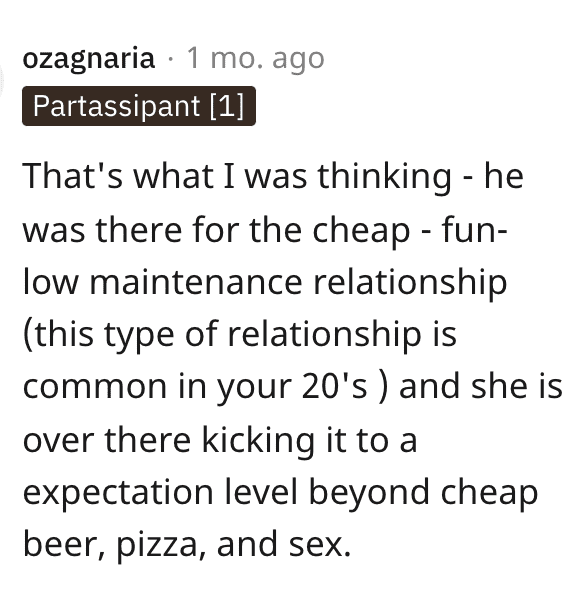 And get this – OP agrees, because it sounds like from her edit that the relationship might be over.

EDIT: There are so many comments that I can’t reply to all of them, so hopefully an edit is okay for the sub’s rules. I just wanted to thank you all for your judgements, but most of all for your advice.

I feel kind of stupid. Yes, there has been a pattern of this behaviour for years, but I guess I just never paid attention because I was 22 when we started dating and I was used to four years of cheap university guys. But I’m starting to realise that it’s not really acceptable, and this relationship might not be the best option for me.

Thank you again for all the advice. It sounds cheesy but this post might end up genuinely changing my life.

I hope this guy learns from his mistakes but something tells me that’s probably not going to happen.

What do you think? Did she make the right call? Let us know in the comments!