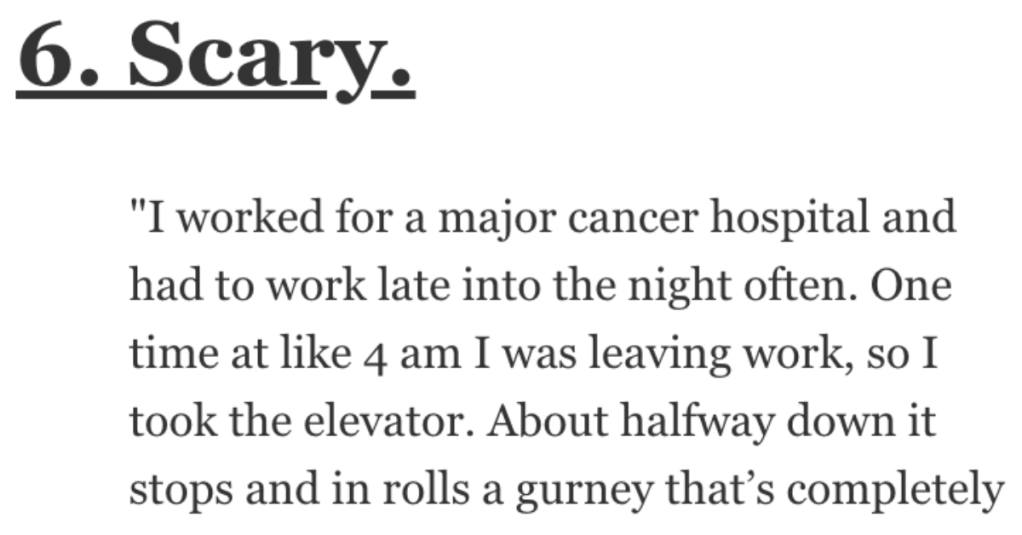 What Do You Not Want to Know About? Here’s What People Had to Say About This.

We live in a world today where pretty much everything we’d ever want to know is right at our fingertips…but there are still some things that each of us doesn’t want to know about.

For example, I know that I can’t and won’t watch any of those animal cruelty videos that many vegetarian and vegan groups pass around because I just can’t handle it…so I choose not to…

Even though I have a feeling it might make me a vegetarian if I saw them. But I’m just not willing to go there.

What do you not want to know about?

“When you d** the mortician will install a corkscrew up your behind.

It solves the problem of leakage and gas.

Just one more fun thing to look forward to!”

“The fact that there are tiny shrimp in the tap water of New York City.

Also NYC is the only city in America that doesn’t treat their water. They have a federal opt out because the serve so many people.

That’s why the shrimp are in there.”

“My sister’s secret s** kinks after she was k**led.

Luckily I got rid of the electronic and physical evidence of her really weird and out their kinks before mom saw / found them.”

“After my dad d**d, we had to clean out his apartment.

I saw he had a grey hair removal. It occurred to me later, as an adult, that he recognized that I bragged at school for having a late 40s dad with no grey hair on his head.

He didn’t want to shatter my image of him, so he made sure when I saw him that he didn’t have any grey.”

“The people on House Hunters already have picked their house before they film and they just pretend like they’re picking it out for the first time on camera.”

“I worked for a major cancer hospital and had to work late into the night often.

One time at like 4 am I was leaving work, so I took the elevator. About halfway down it stops and in rolls a gurney that’s completely covered with a body bag.

What I learned is that there is an underground tunnel from the hospital to the morgue that they use to move deceased patients, and there is a near constant stream of bodies going through there every day (it is a very large hospital).

I just happened to catch the event at the creepiest time, at 4 am when hardly anyone else is there working and everything is dark and quiet.”

I would of course like to know about it right after it happens, but I would prefer not being afraid to sleep on my back or having background noise so I don’t focus on the silence too much to notice that I’m falling asleep as not to accidentally trigger it.”

“That kid who went into the Nutty Putty cave.

Watched the story on YouTube and I hate that I know about it and now I’m picturing his corpse sealed off forever alone in the dark.”

“I watched the documentary; American M**der: The Family Next Door.

Christ, I wish I never knew that story existed.”

“I was working at Disney World when an obese dad tripped walking out of a restraunt with his child in his arms.

He landed on the baby and there was no crying.

In typical Disney fashion was not announced d**d until it was off Disney property.”

“Following a bite, the rabies virus spreads by way of the nerve cells to the brain. Once in the brain, the virus multiplies rapidly.

This activity causes severe inflammation of the brain and spinal cord after which the person deteriorates rapidly and d**s.”

“My dad d**d a few months ago. He had a heart attack in the middle of the night. I was under the assumption he d**d in his sleep.

When I went to his home, one of his friends was walking me through the home and told me that he was the one that found my dad. Told me he had blood running out his mouth, his eyes were open and it looked like he was struggling to get out of the bed.

I didnt ask for that information. And I’m bummed I got it. My dad lived by himself in the middle of nowhere and it breaks my heart to know he d**d alone, afraid, and in pain.”