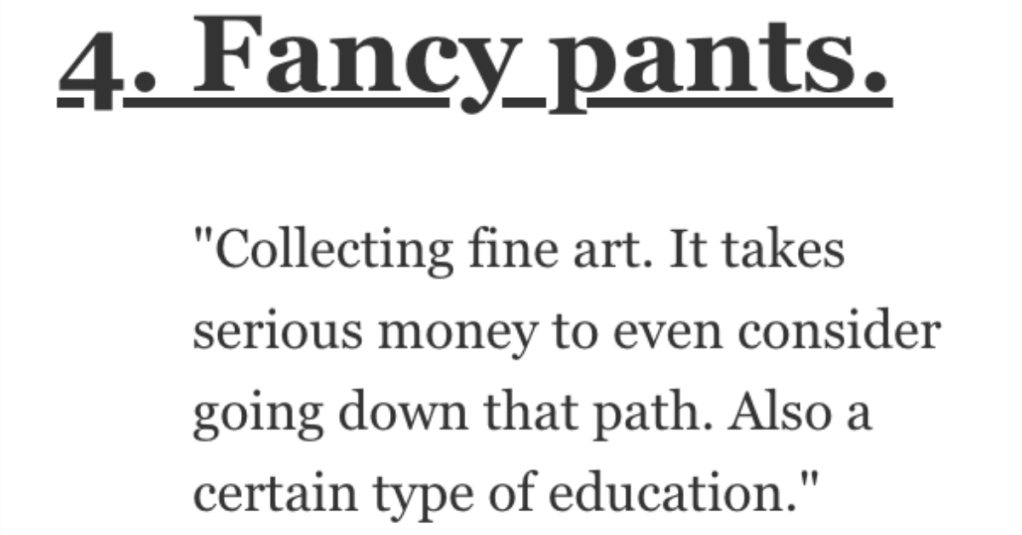 What Hobby Makes You Think a Person Grew up Wealthy? 13 People Share Their Thoughts.

I can think of a few hobbies that come to mind that remind me of money: yachting, polo, and lacrosse.

And I think I’m pretty much right on the money about those!

Folks on AskReddit talked about the hobbies that make them think people grew up rich.

“My uncle, who’s incredibly wealthy, has the hobby of building and flying his own airplanes.”

Years ago, I worked for Wrigley (gum company now owned by Mars) when it was still owned by the Wrigley family and William Wrigley Jr. was the CEO. My second day, I ran into Mr. Wrigley in the elevator but didn’t know who he was.

During our small talk, it came out that I trained BJJ (still VERY new in the US ~20yrs ago) and I ended up asking him what sports he played. His response? “Oh, I play a little pick-up polo from time to time.”

I can’t even imagine how the hell a pick-up game of polo might materialize. I can’t imagine a dozen or so billionaires out riding their favorite polo horse and just happen to run into one another at the park.”

Not the kind at arcades and stuff, but the real kind… it’s how you get into Formula 1.”

It takes serious money to even consider going down that path.

Also a certain type of education.”

“Anything that doesn’t match the climate of where they grew up.

If they grew up in the desert but they’re ace skiiers then I assume they had the money to travel a lot and own all the gear, etc.”

6. I don’t even know what this means.

“Horse dressage for sure.

I know some middle class folk who own a horse or two on a farm but if you’re riding in competitions, you’re likely wealthy.”

“My fiancé was telling me a story about the “exchange students” that lived with them and how they were so nice and would help take care of the house.

It was at that moment she realized that she grew up with Swiss nannies.”

“Mountain climbing in remote places in the world.

I went to a work mandatory motivational speaker whose spiel was climbing Mt. Everest 4 times starting at age 22 and other mountains in Africa, Europe, and Asia.

Guess I did not land the correct job out of college.”

Then they name all the places in the world they’ve scuba dived.”

“Fencing is an interesting one cause it’s actually not super expensive if you get started with a small club or school team or something, but once you try to venture out on your own into competitions, the cost of buying your own quality equipment and USFA membership fees hits you like a truck.”

“People that go to Disneyland/Disney World at least once a year despite living several states away.”

“When I got to college and realized that no one else knew how to snowboard or wanted to go trap shooting with me I had to adjust my hobbies to slack lining and frisbees.”

Got scouted for crew during freshman orientation because I managed a 2km row in under 7 minutes.

What makes you think someone grew up wealthy?